event
Symposium: The Graphics, Music And Writings Of Herbert Brün

The Graphics, Music and Writings of Herbert Brün

Concert: The Graphics, Music, and Writings of Herbert Brün 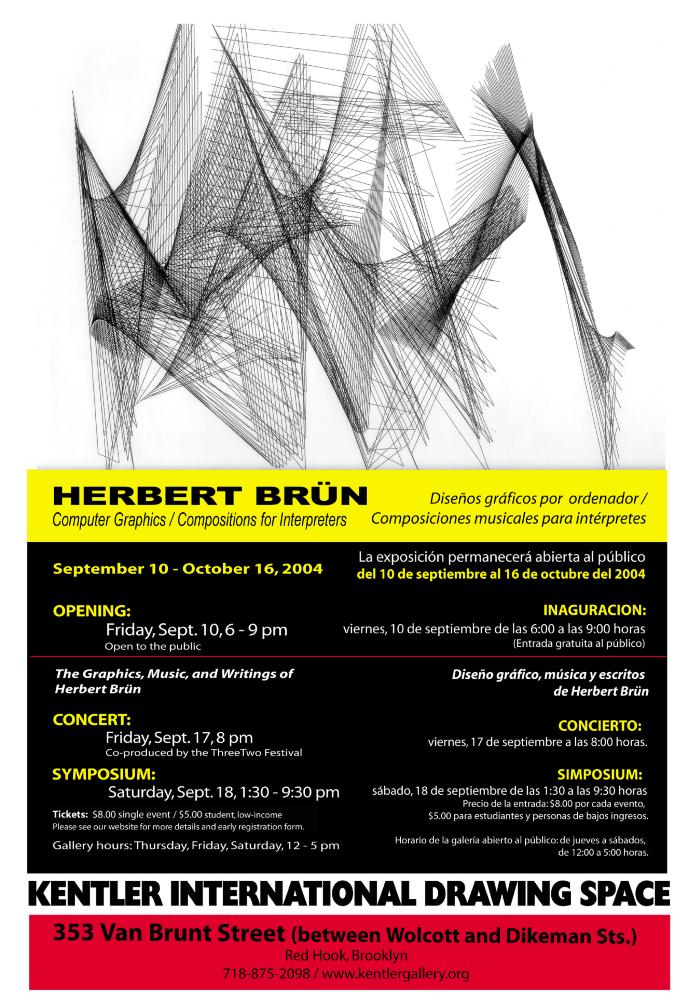 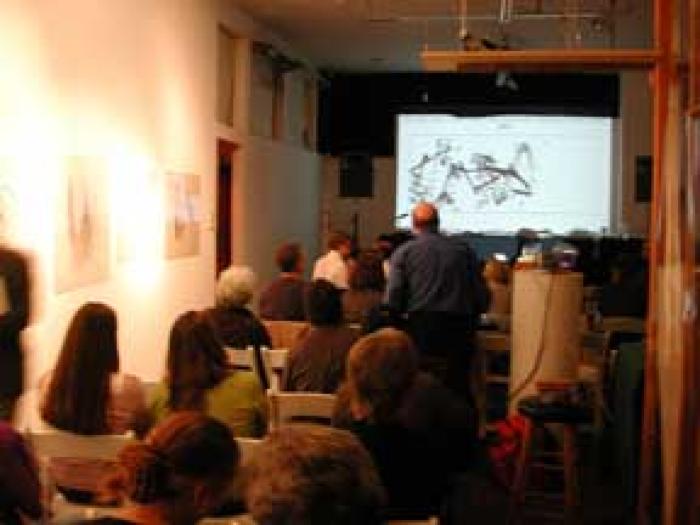 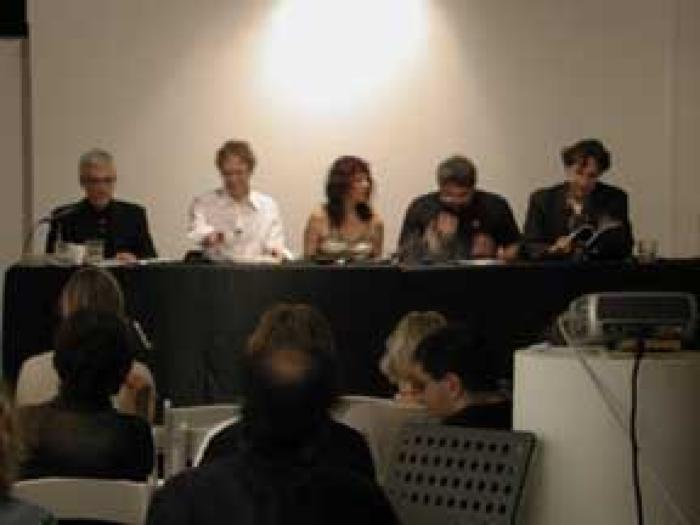 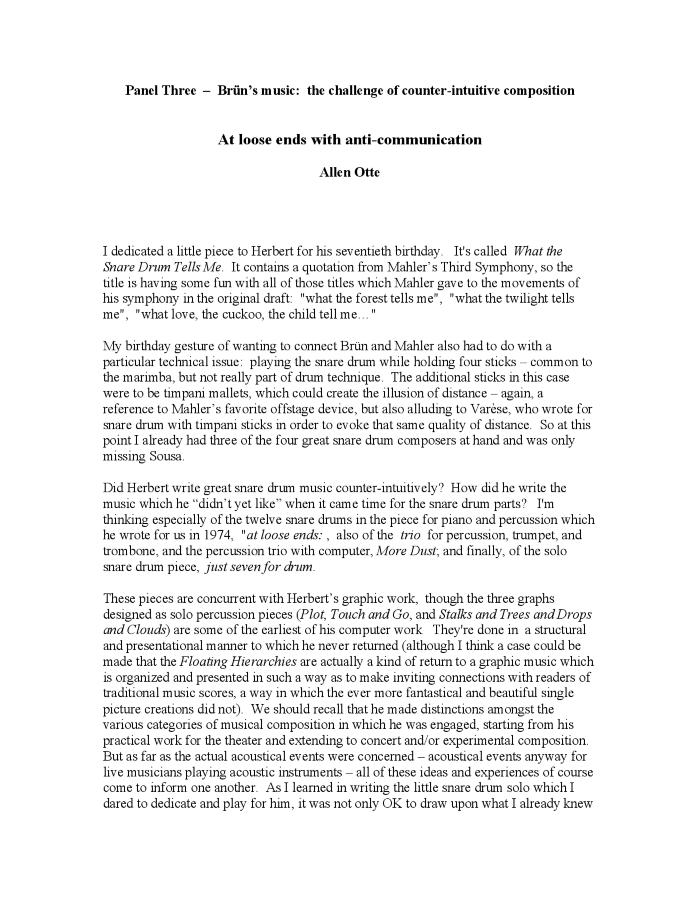 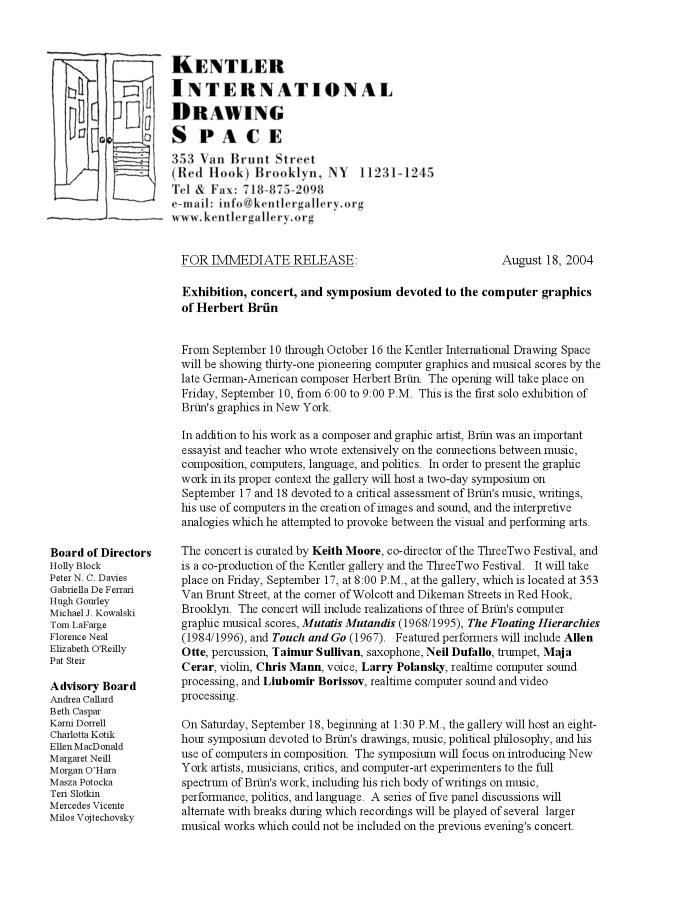 3:00 P.M. Panel Two
Herbert Brün as a political philosopher
Guest speaker:
Arun Chandra
"If Then What Now? : Ethics and 'The Committee of Criteria' "

8:30 P.M. Panel Four
Roles and rationales for computers in the world of art and music
Guest speaker:
Duane Palyka
"Form and Meaning in Brün's Lyrical Graphics"

Computer artist and physicist Liubomir Borissov is a Vilar Fellow in the Performing Arts at the Interactive Telecommunications Program at NYU.

Arun Chandra is a composer and Music Director of the Olympia Chamber Orchestra. He teaches at The Evergreen State College and is the editor of the recently published collection of Brün's writings, When Music Resists Meaning (Wesleyan).

Composer Mark Enslin is a founding member along with Herbert Brün of the Performers' Workshop Ensemble and the School for Designing a Society.

Lydia Goehr is a professor in the philosophy department at Columbia University. She is the author of The Imaginary Museum of Musical Works: An Essay in the Philosophy of Music (Oxford: Clarendon), and The Quest for Voice: Music, Politics, and the Limits of Philosophy (Oxford and California).

Charlotta Kotik has been chair of the department of Contemporary Art at the Brooklyn Museum since l992. She curated the international touring retrospective of the work of Louise Bourgeois and served as the American commissioner for the 1993 Venice Biennale. Her work for the Brooklyn Museum has included the acclaimed series of LobbyProjects, and, most recently, Open House: Working in Brooklyn, a large group exhibition of artists working in the borough.

Composer Michael Kowalski produced a series of major computer-assisted compositions in the 1970's (Gringo Blaster : Einstein Records EIN008).  His third chamber opera, The Rise and Fall of the First World, will begin previews in 2004.

Lenore Metrick-Chen's writings have appeared most recently in Sculpture and Public Arts Review. She is completing her dissertation at the University of Chicago for a joint Ph.D. in the Committee on Social Thought and the Department of Art History. She is currently the Docent Education Director at the Des Moines Art Center in Des Moines, Iowa.

Katherine Jánszky Michaelsen is a professor of art history at the Fashion Institute of Technology.  She is the author of many articles and catalogue essays, and has been a guest curator at the National Gallery of Art, Washington, D.C., the Kunstverein, Düsseldorf, and the Neuberger Museum in Purchase, NY.

Percussionist and composer Allen Otte is professor of percussion at the University of Cincinnati. He founded the Percussion Group Cincinnati in 1979, with which he maintains an intensive international touring schedule.

Duane Palyka's computer artwork has been shown at the Institute of Contemporary Arts in London, the Brooklyn Museum, the Corcoran Gallery, and the Smithsonian. He is a professor at the Rochester Institute of Technology School of Film and Animation.

Composer Susan Parenti studied composition with Herbert Brün and is a founding member along with Brün of the Performers' Workshop Ensemble and the School for Designing a Society.

Composer, performer, and theorist Larry Polansky teaches in the graduate program in computer music at Dartmouth College and is the co-founder and co-director of Frog Peak Music.