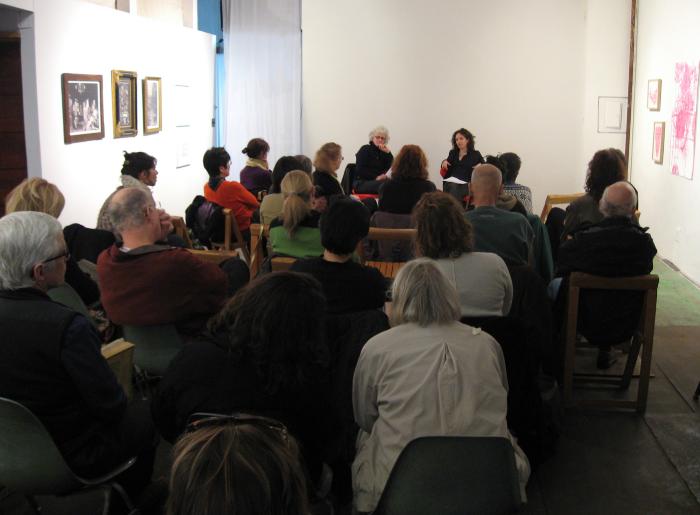 Re:GENERATION, a conversation with curators Joan Snyder and Molly Snyder-Fink

Kentler International Drawing Space in collaboration with Smack Mellon present a provocative (re)examination of feminist art today through the work of international, emerging women artists. The exhibition at Kentler presents drawings and works on paper by 14 artists. Re:Generation, the show’s title, alludes to the 1970’s Feminist Art Movement and aims to reconnect that time with the dialogue surrounding feminism today.

Re:Generation represents the work of women artists from Argentina, Canada, Italy, Japan, Mexico, Pakistan, The Philippines, Russia, Tunisia, and the United States. Re:Generation asserts that there is an intrinsic distinctiveness to the work of women artists. Each work in the show is a testament to the artist’s desire to develop a means of speaking through her work, whether she is untangling her own cultural history, grappling with a social and political landscape that surrounds her, or aiming to relay an intangible emotional reality.

Re:Generation originated at Douglass College in 2005 with the celebration of the 35th anniversary of that school’s Mary H. Dana Women Artist Series, a series Joan Snyder initiated in 1971. Originally, the Women Artist Series provided a much-needed venue for women artists not being shown elsewhere while also exposing students to the groundbreaking work of artists such as Louise Bourgeois, Ida Applebroog, Faith Ringgold and Nancy Spero. Today it continues as such, provoking the questions: Is there still a need for women-only shows? Are women’s voices being heard? Which women are able to tell their stories and which women are not? For the 35th anniversary Snyder asked her daughter, a documentary filmmaker, to join her in collaborating on this examination of feminist art today. Re:Generation speaks to the regenerative power of developing one’s own art-making practice.