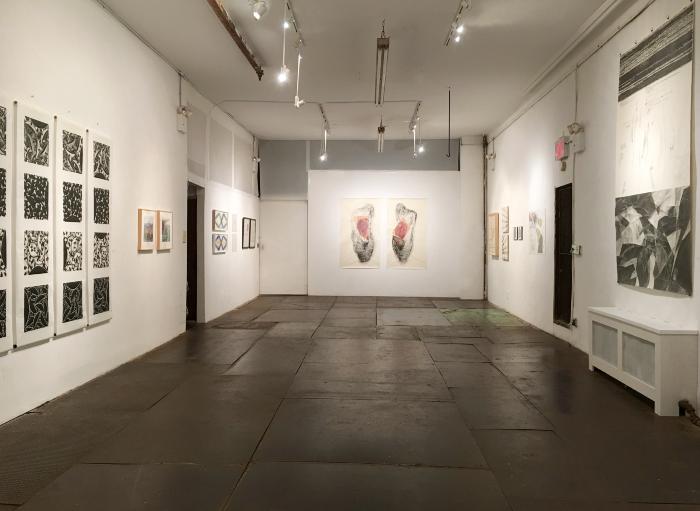 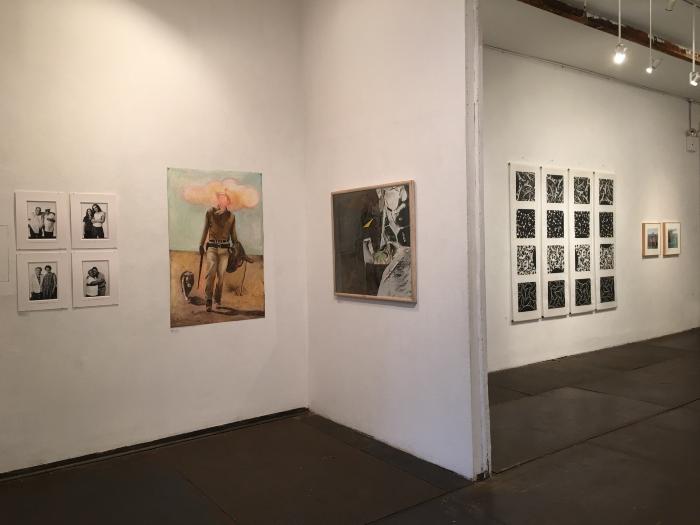 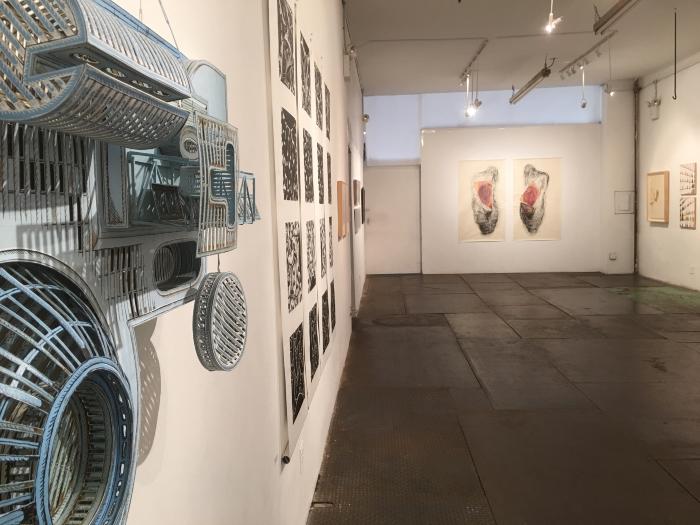 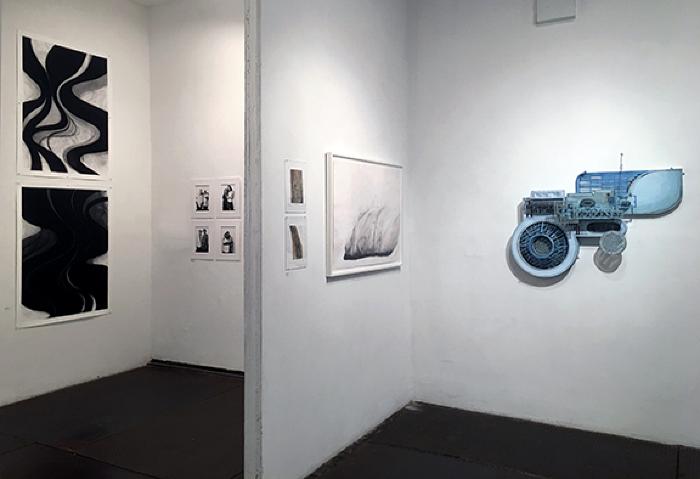 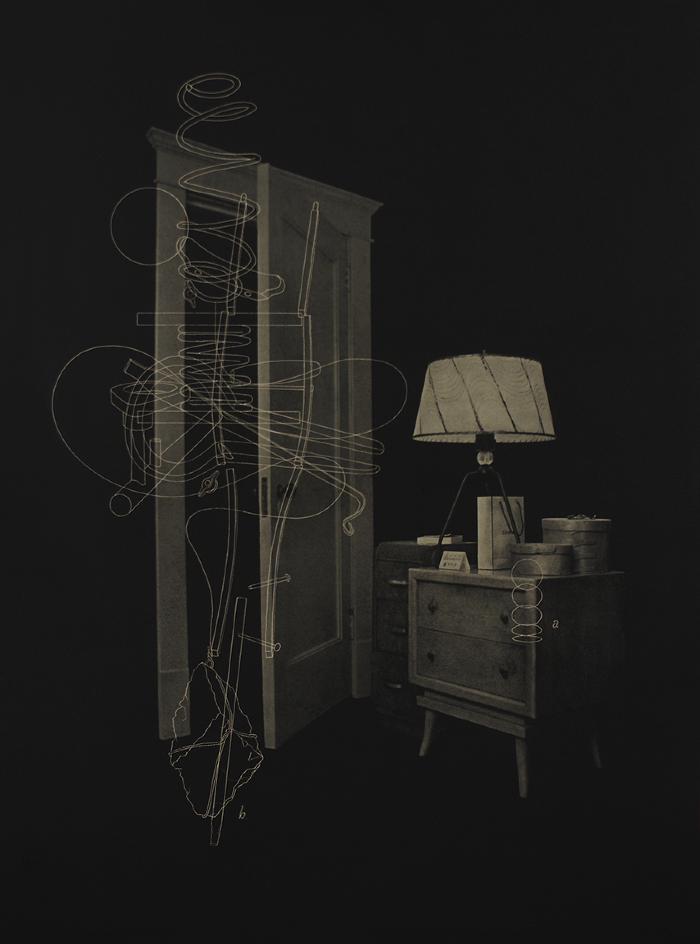 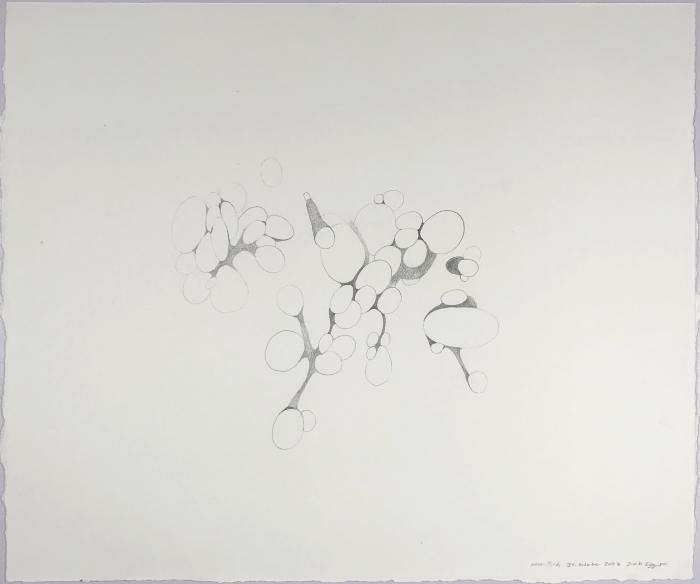 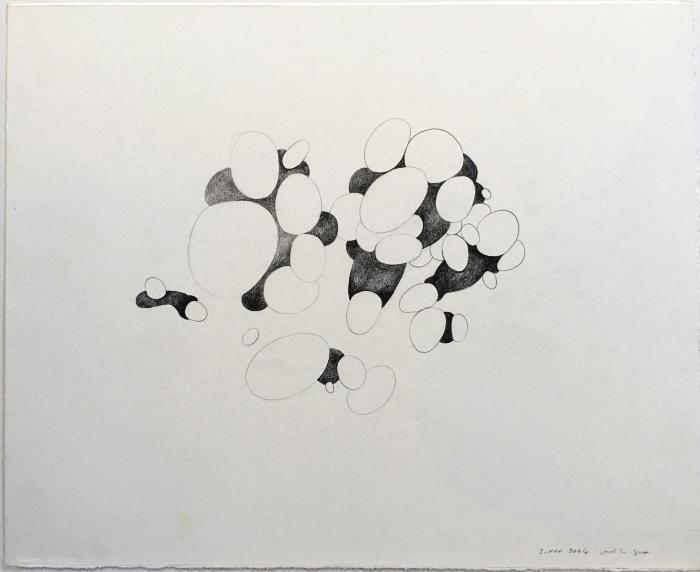 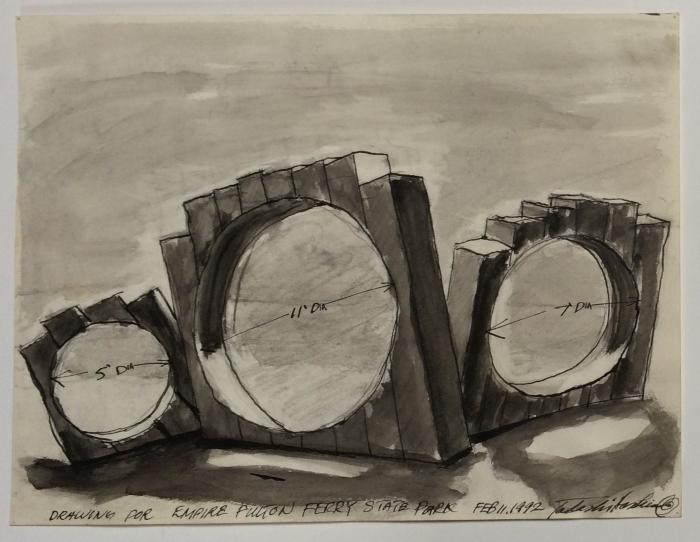 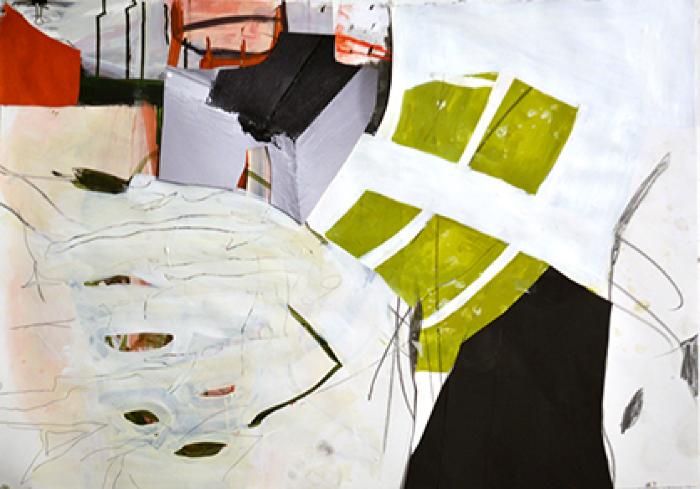 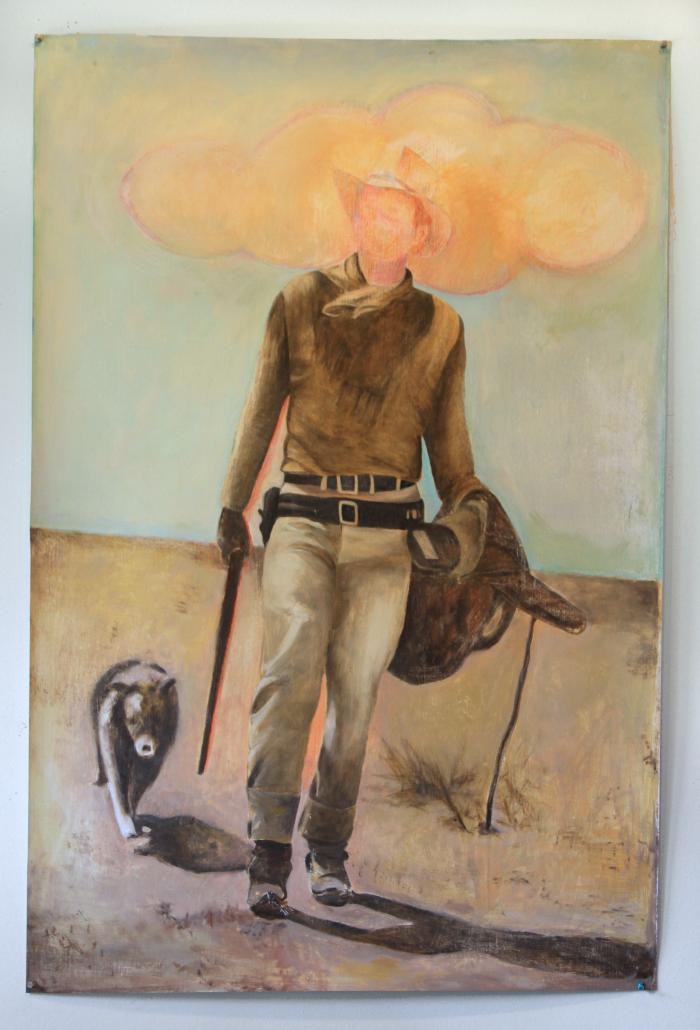 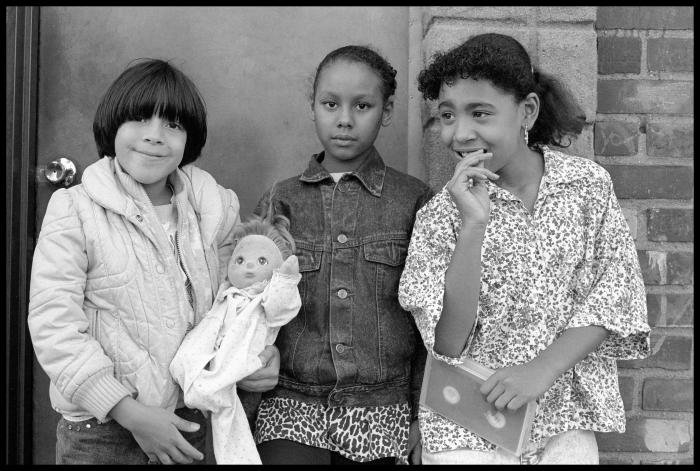 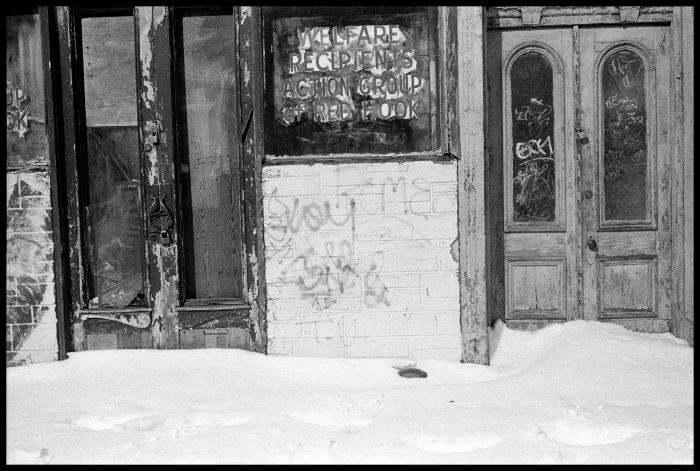 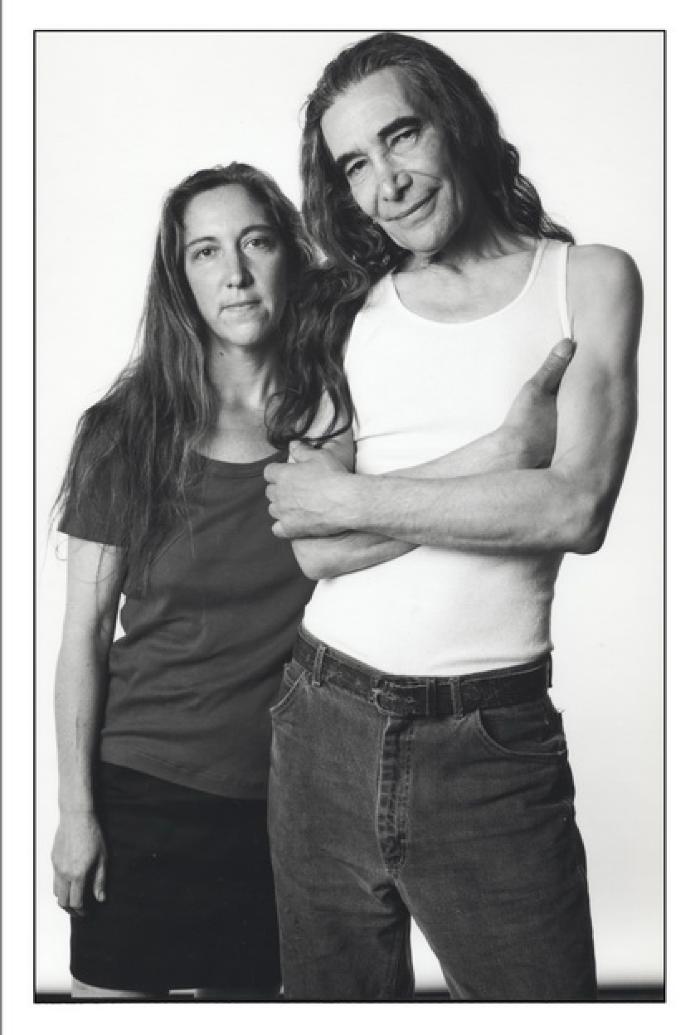 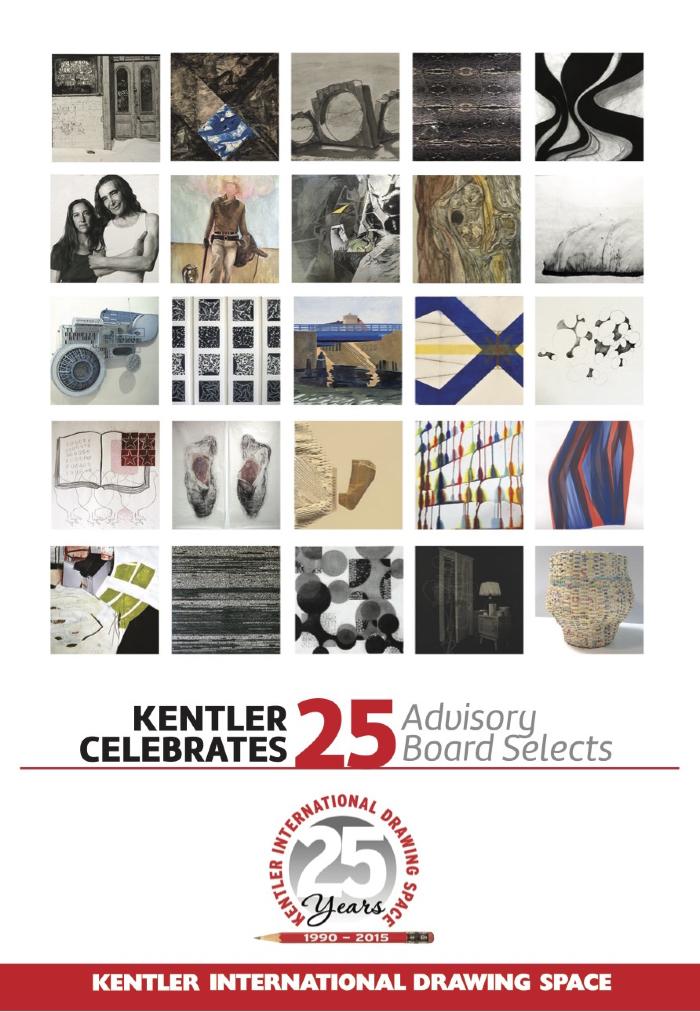 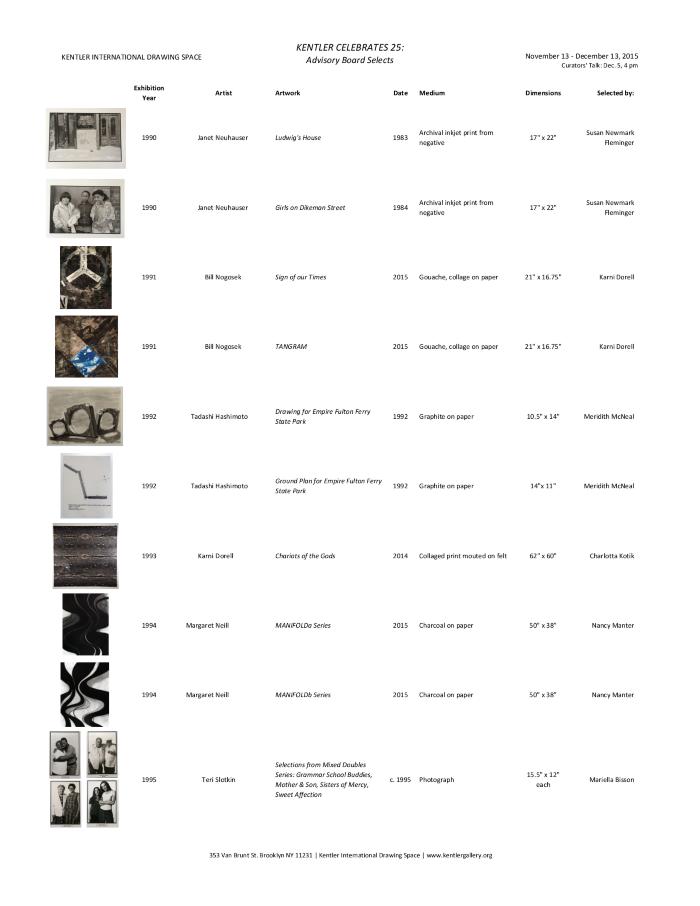 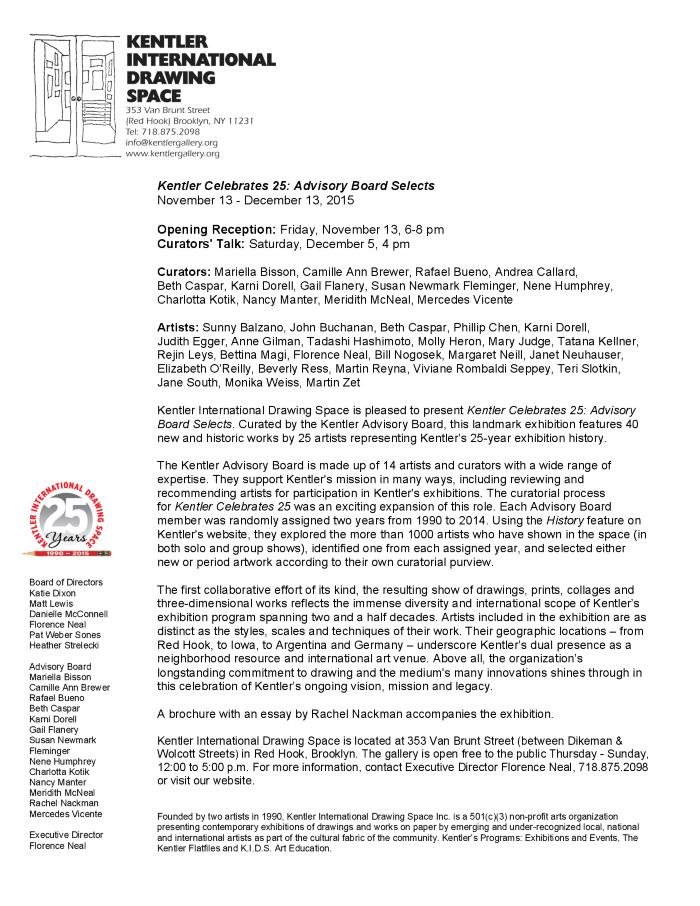 The artists Florence Neal and Scott Pfaffman founded Kentler International Drawing Space in 1990 in the waterfront neighborhood of Red Hook, Brooklyn. When they first encountered 353 Van Brunt Street in 1984, it was a dilapidated building, empty and in ruins but with solid bones. This year Kentler celebrates over 210 exhibitions, more than 2,000 works on paper in the Kentler Flatfiles, and a quarter century of activity and impact.

In her 25 years as Kentler’s executive director and chief curator, Neal has gathered around the space a loyal and active community of curious people, who come to Kentler to explore the practice of drawing in its many forms. Organized by the 14 artists and curators who comprise Kentler’s advisory board, Kentler Celebrates 25: Advisory Board Selects highlights a diverse body of work by some of the many artists who’ve shaped Kentler’s story. In its broad-ranging artistic vision, the exhibition is a testament to this unique space, to its remarkable leader, and to the diversity of its supporters.

Neal moved to New York City from Georgia in 1977. She arrived to find a city grappling with epidemics of crime, poverty, and addiction – and an art world alive with the ingenuity and camaraderie bred by difficult circumstances. Artists were finding space to live and to work where they could. Neal first settled with friends in a loft on Water Street in DUMBO, where she worked a day job doing graphic design and devoted the rest of her time to making art and showing her sculptures, paintings, prints, and drawings as part of a number of artist-run cooperatives.

In 1984 Pfaffman saw an ad on a bulletin board for 4 buildings for sale in Red Hook, available through the New York City Housing Program, a city initiative through the Department of Housing and Preservation. This innovative program enabled artists to bid on vacant city-owned properties through a written proposal process. The city hoped that repurposing these dormant buildings as artists’ live/work spaces would attract cultural producers to disintegrating neighborhoods, counteracting urban blight.

The building on Van Brunt Street was over 100 years old when Neal and Pfaffman first saw it. Built in 1877, it was originally owned by William Kentler, a Prussian immigrant who ran a dry-goods business in the street-level storefront. Kentler was an influential member of the Red Hook community until his death in 1911, but after changing hands over several generations, by the 1970s the building was in the care of the city. When the artists bought 353 Van Brunt Street, Red Hook was an unlikely place to start an exhibition space. The neighborhood was neglected and dangerous, wounded by a once-booming waterfront shipping industry that had relocated to New Jersey, and cut off from easy access to public transportation. Yet Neal, the daughter of an architect who specialized in historical preservation, recognized in the Kentler building both its structural value and its deep connections to time and place. Perhaps she also saw in it the great possibility of the empty vessel, filled with the echoes of William Kentler’s efforts to establish himself.

To many in the community, the artists moving in on Van Brunt Street were a curious arrival. Kentler’s new owners had to face the simultaneous challenges of getting the building up to code – which took 6 years – and navigating the difficulty of the neighborhood. The struggle was both to prove to Red Hook residents that Kentler belonged there and to convince Kentler’s patrons to make the long trip to Red Hook.

The name Neal and Pfaffman gave to their venture stated clearly their vision for it. They called it Kentler, in deference to the building’s history, and chose the word Space – not Gallery – because Kentler was always meant to be a place for gathering, learning, and questioning, “a space where things happen” rather than a storefront. International and Drawing, of course, referenced the conceptual drivers behind the space. “We were both sculptors, and I was also a painter, but we constantly made drawings,“ Neal recalls. “At first it was because of the economics of the medium, but then drawing became part of everyday life – looking at them, making them, culling through them.”

From the beginning the artists wanted to deepen and to expand public understanding of drawing as a practice. They chose to direct Kentler’s focus toward the multiplicity of drawing: to demonstrate the many roles drawing could play within an artist’s practice and to showcase the range of unexpected forms it could take. The exploration of drawing on an international level was particularly important, and a commitment to providing exposure to artists outside the American art world has always been a part of Kentler’s bedrock. Its history has been carved out by artists and their work.

Since 1990 Kentler has produced between 6 and 12 exhibitions each year. Neal designs the annual program with an objective eye, selecting from a competitive pool of proposals by local, national, and international artists and curators. She is careful to balance solo shows with thematic group exhibitions, always prioritizing work that poses questions about or challenges the conventions of drawing. Neal is also responsible for managing and guiding the assembly of the Kentler Flatfiles, a unique public resource providing access by appointment to works on paper by hundreds of artists. In all Kentler’s activities, Neal’s goal is to represent with integrity the breadth of possibility inherent in drawing. Through Kentler, she provides an incubator for the medium – “to give artists the public opportunity to focus on the intimacy and potential of drawing.”

As Kentler’s executive and artistic leader, Neal contributes to the space at such an impressive level that many overlook her parallel contributions as a prolific artist. While shepherding Kentler through years of successful initiatives, Neal has not for a second set aside the art-making part of her life. It is this continuous dedication to her own artistic growth that allows her to understand so keenly the needs and desires of the many artists Kentler exists to serve. Kentler’s mission to evolve the definition of drawing requires great aesthetic curiosity and flexibility, which Neal welcomes as a challenging and beloved component of her work.

In the years since 1990, Kentler has also become a mainstay of the Red Hook community. Through Kentler, Neal started the Red Hook Archives, an ongoing initiative to amass neighborhood artifacts and ephemera in cooperation with its residents. In the wake of superstorm Sandy, Kentler hosted a number of relief efforts, community meetings, photo restoration, performances, and story-telling events for the community. In 2004 Kentler launched the K.I.D.S. Art Education program, which provides educational art classes to area schoolchildren and hosts free weekly drawing events for local families.

Kentler’s advisory board was formed in 2002 to support Neal’s efforts by cultivating interest in the space and by reviewing exhibition proposals and Flatfiles submissions. Curator and arts administrator Sallie Mize joined Kentler as program manager in 2009 and has since skillfully assisted Neal in spearheading numerous outreach initiatives, including the ongoing digitization of Kentler’s Flatfiles, which will be made accessible online in 2016 as part of a major website expansion.

This exhibition – the first collaborative curatorial effort by the advisory board – includes work by 25 artists who have previously shown at Kentler, representing each of its 25 years of history. It is an opportunity to showcase the extraordinary depth of Kentler’s exhibition program, the generosity and dedication of Florence Neal, and the love that artists feel for this special space.

“To me,” Neal says, visiting Kentler is “like going to a botanical garden. Kentler is a destination. It’s a place just to be able to think. It’s a place that not only offers beauty but helps people see the value and the possibility of art in their lives.” The story of Kentler is a story of welcoming and opening up: to the many artists who have shared their work, and to any person who wonders about what drawing is and what it can be.

– Rachel Nackman is a curator, editor, and web developer based in Brooklyn, NY.

Acknowledgements: I would like to thank the following people for sharing their Kentler stories with me: Florence Neal, Scott Pfaffman, Mariella Bisson, Sallie Mize, and Teri Slotkin.