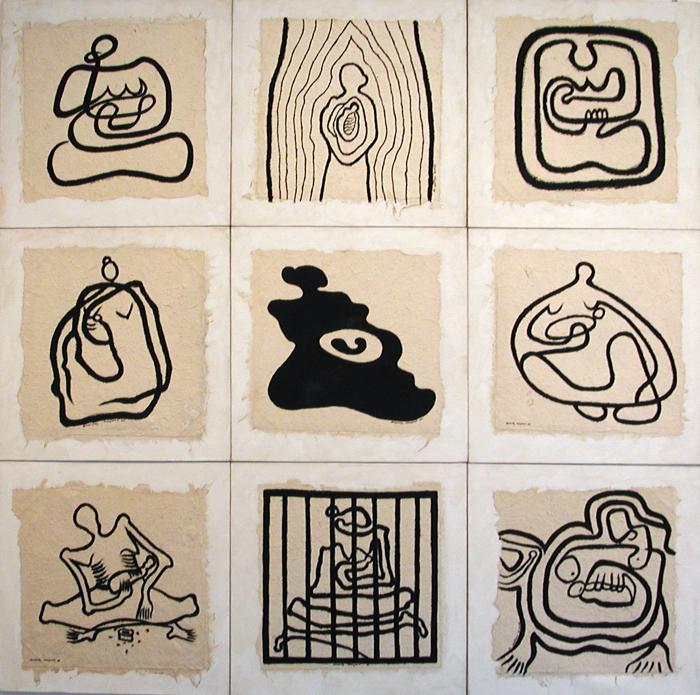 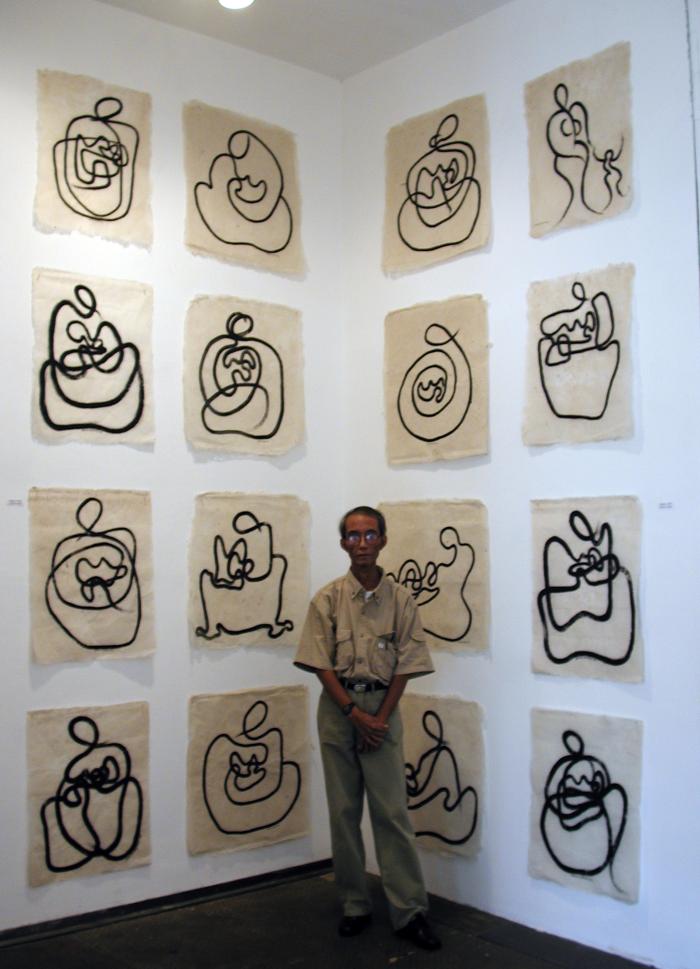 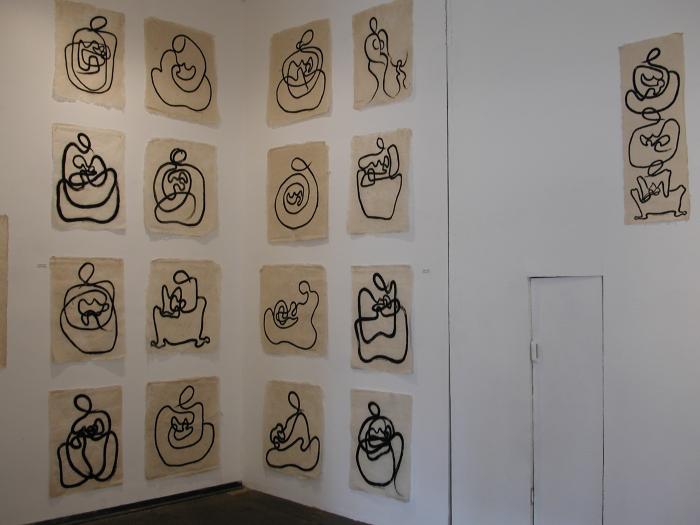 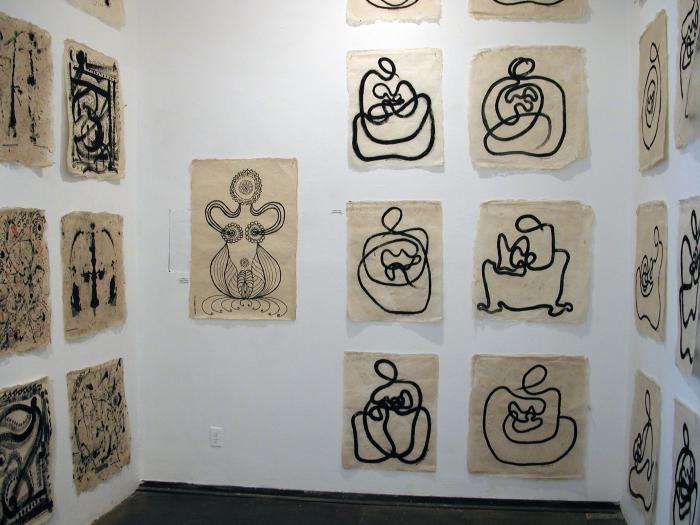 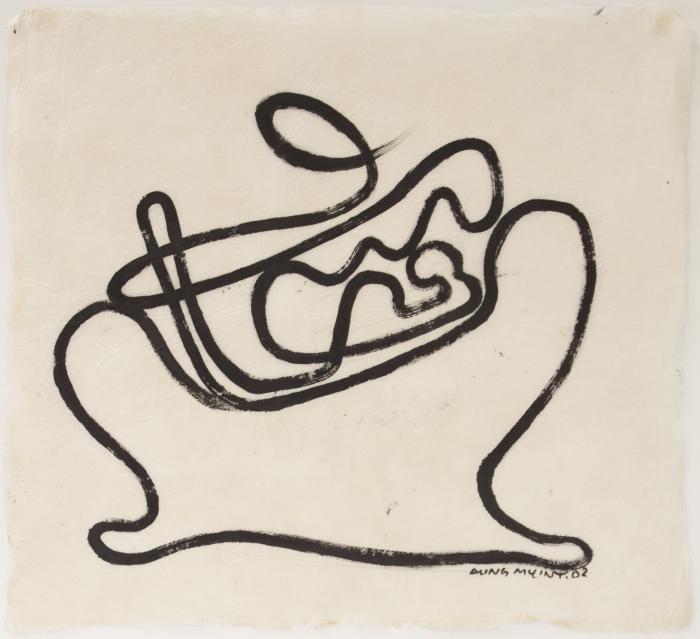 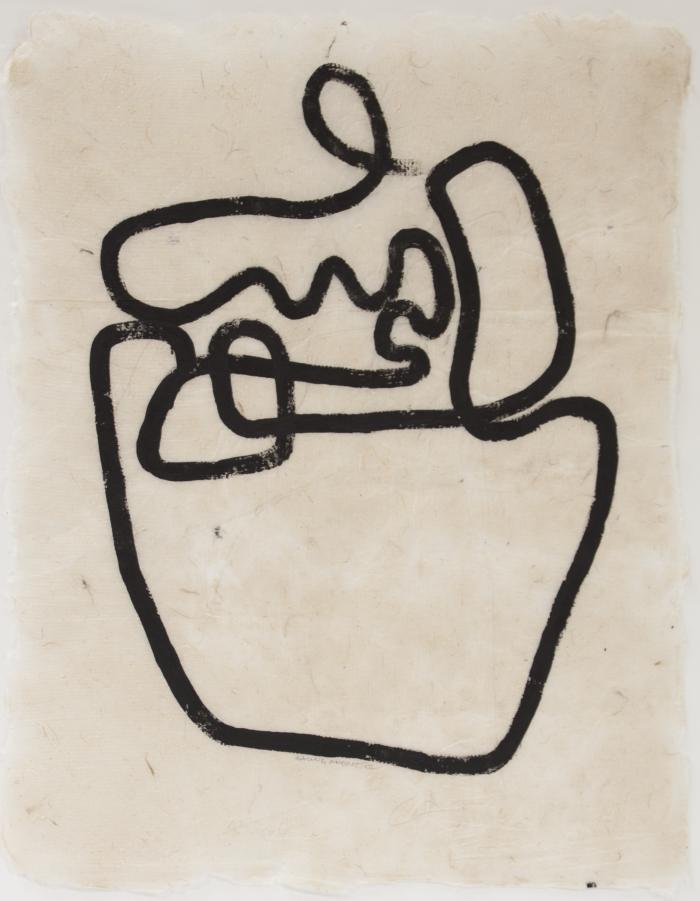 
Aung Myint born in 1946 in Myanmar, 1968, graduated from the Rangoon Arts and Science University, majoring in Psychology. A self-taught artist, who often works in oil, also works freely on installation, performance and collaborative paintings. His works place him in the forefront of the contemporary art movement in Yangon.

Much of the forms and compositions of Aung Myint's work is based on the Myanmar traditional alphabet using mainly black, white and red in his paintings. His work moves through mid-sixties semi-abstract and cubist-style works to the period of "fragmenting" his images in the late seventies and eighties, to an introspective, highly emotional splashing, smearing and dripping of paint, the strokes used being derived from the circle and swirls of Myanmar alphabet.

His latest works use that same Myanmar calligraphic stroke, but these have been tamed into gentle and sometimes humorous depictions of "Mother and Child" this theme is used to make a contemporary statement about humanity, society and country. The paintings can be seen as series of love poems inspired by his own experience with his wife, his own daughter's child and also feelings for his homeland. Most of the works in this series comprise a single linear stroke in brush traversing the entire painting to create a work that is extremely simple and childlike, and as charming in its apparent naivete. It is interesting that the thesaurus list of the word "naivete" with "artlessness”.

In Aung Myint's love poems he subtly evokes peace, love and joy in the image that he has abstracted but with which we can make out with little difficulty the image of mother and child. The one doting, soft, strong, the other, an ingenuous squiggle of childhood. Infancy is a little mass, not quite formed, a natural "other" of the mother figure. To Aung Myint, color has always been a academic choice, and thus has chosen to use only black and white and sometimes red as an emotional color with a variety of meanings and interpretations. Black and white for the artist are non-negotiable; the act of painting is unlike writing. To call each painting an emotional statement would not be strong. It would also be correct to say that each piece comes with many layers of emotion-anxiety, anger, despair, sadness, tragedy, acceptance, belief.

Aung Myint has exhibited his works in Japan, Malaysia, Taiwan and done solo exhibitions in Tokyo, Germany, Singapore and now in New York. Each exhibition revealed different aspect of his painting. The work exhibited in Tokyo and Germany focused on his free brush stroke and drip works of the late 1990's mostly dark in nature with a confusion of brush work in black, brown, red and white. In Singapore his installation"Egoist" using these comparative traditional/modern images of women have been juxtaposed with a Myanmar tea shop setting with upturned stools and cups, to symbolize disfunction of human relationships. Aung Myint has participated in the Philip Morris Group sponsored exhibition, ASEAN Art Award in Bail, where he received "Jurors' Choice Award" for his "Mother and Child" series.