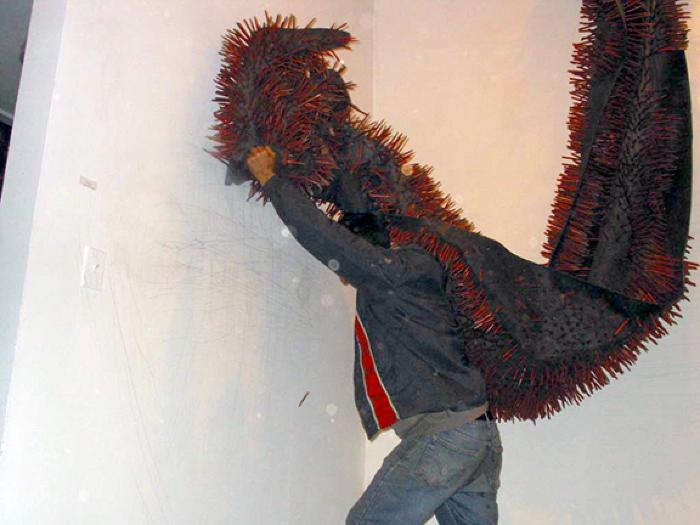 Kentler International Drawing Space is pleased to present Dragan Ilic: Drawing / Devices. This exhibition presents unique approaches to drawing by this innovative artist in his first solo show in New York since 1985. A large scale, multiple line, abstract drawing, resembling a 'futuristic' musical score or a giant computer chip wiring system, is made by using many varied drawing devices invented by Ilic. "My basic interest and ongoing exploration as an artist is the interaction between human creative imagination and machine-like 'robotic activity'." The devices are sets of graphite or color pencils, pastels or brushes, clamped together in a straight line, parallel and equally spaced, in a series of two to five hundred pieces. Placing a large sheet of paper on the ground, Ilic puts his entire body into the motion of drawing with the devices. The use of devices began in 1975 when he suddenly began to make multiple-line drawings with a fistful of pencils. Based on the artist's interest in physics and mathematics, he is exploring in this series, a visual synthesis in which the power of technology, mathematical equations and the intuitive human imagination meet. Interactivity is another important element of Ilic's work. On view is Ilic's large 4 x 14' sculptural drawing device made of rubber from ceiling to floor, and incised throughout with thousands of red graphite pencils. The viewer is invited to manipulate the undulating pencil device and contribute to a drawing on the surrounding walls, thereby directly experiencing the artwork along with the art-making process. Dragan Ilic was born in Bagaljica, Yugoslavia, became an American citizen in the year 2000, and now lives and works in Red Hook, Brooklyn. He is well known internationally for his provocative performances, videos and exhibitions. Some of these venues have included: Documenta 7, Kassel; Alternative Museum, New York; Gallery A, Amsterdam; Tamura Gallery, Tokyo; Gallery '73, Belgrad. Last year Ilic donated fifty thousand pencils to the children in East Timor.