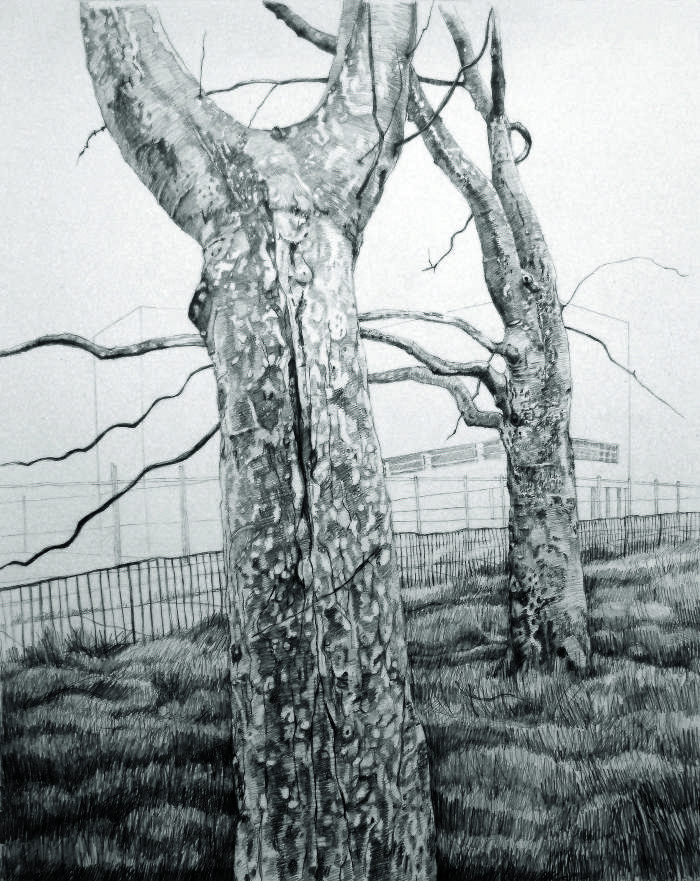 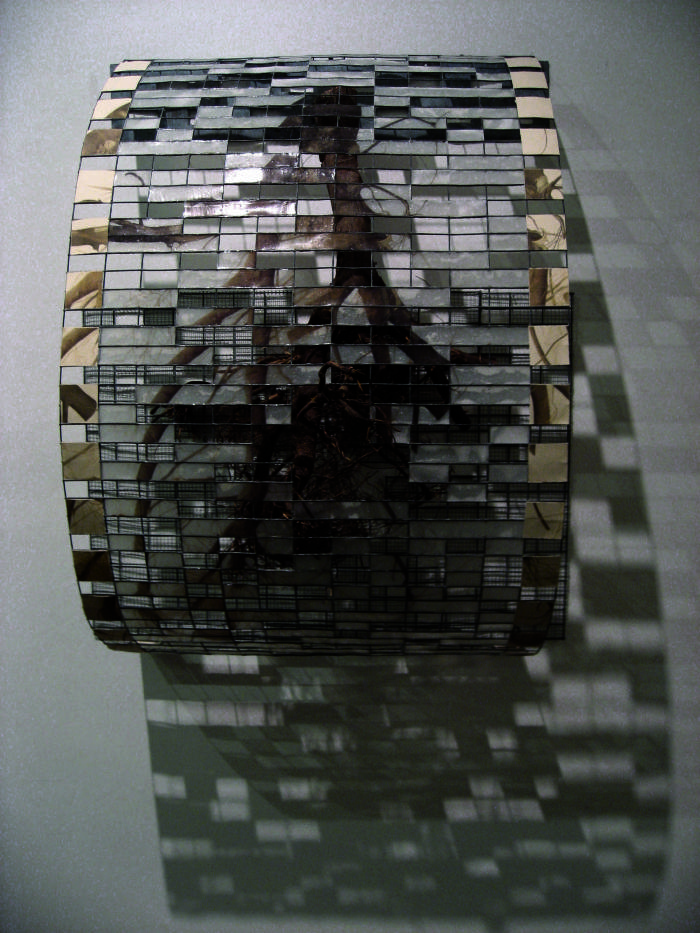 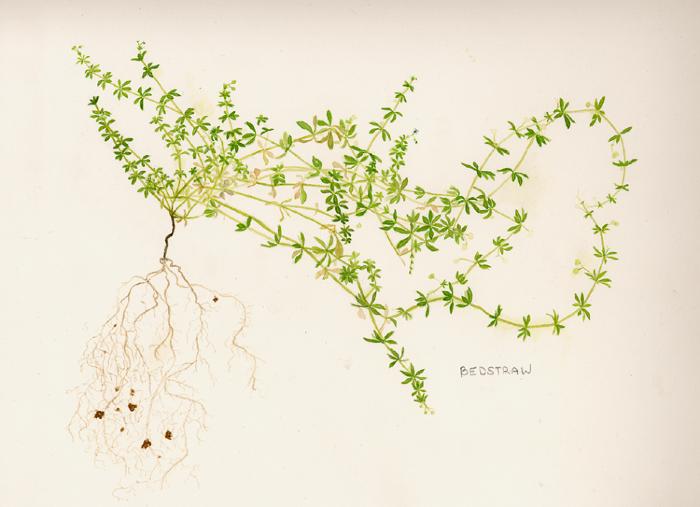 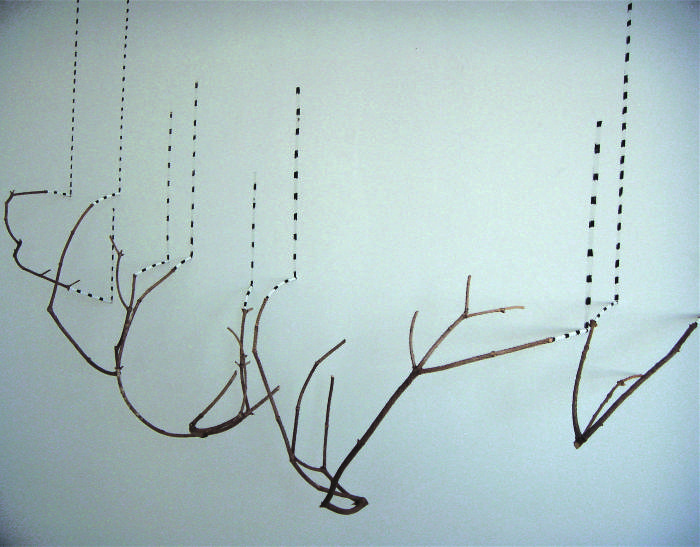 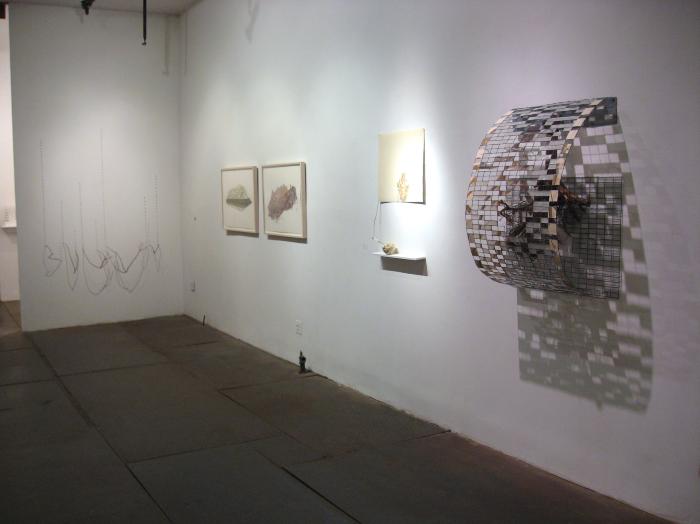 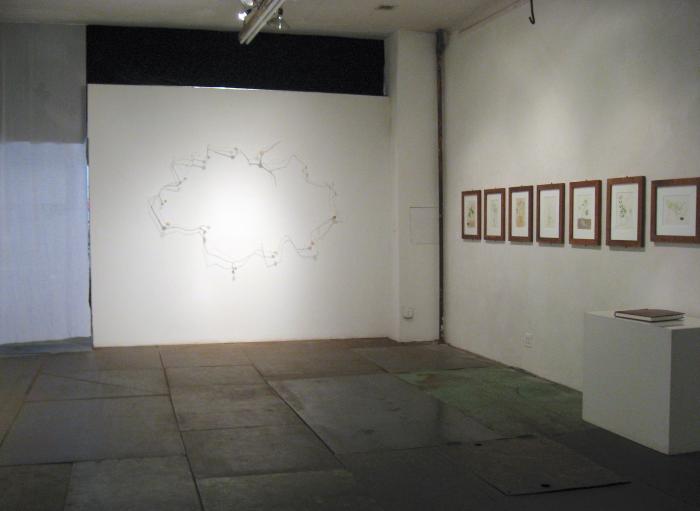 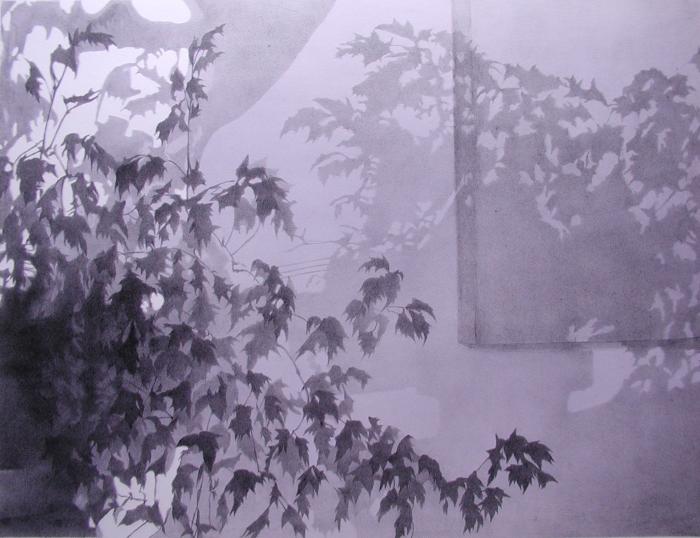 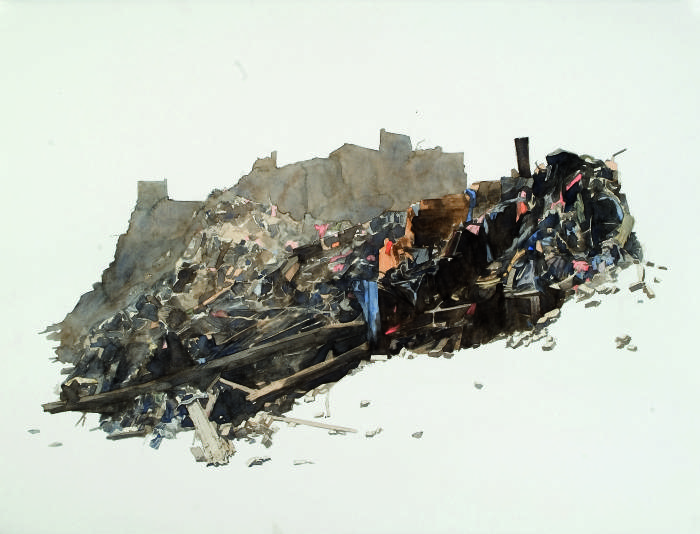 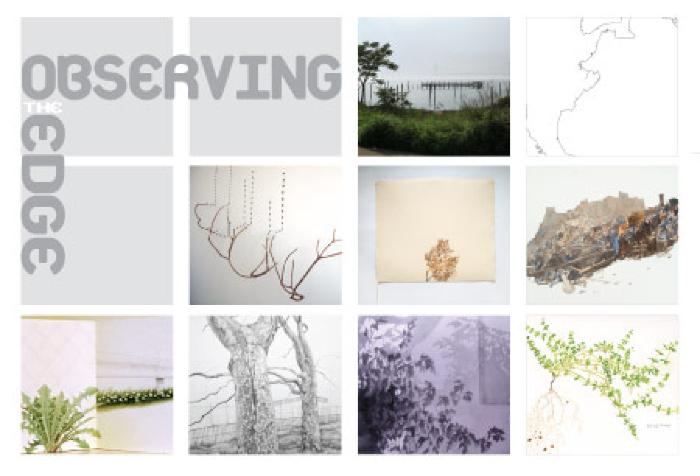 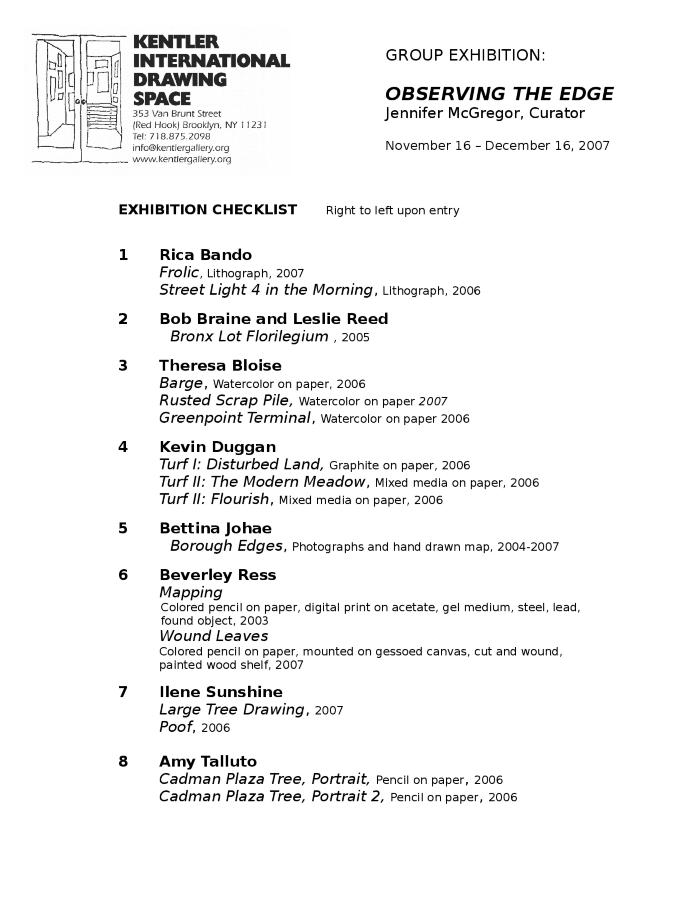 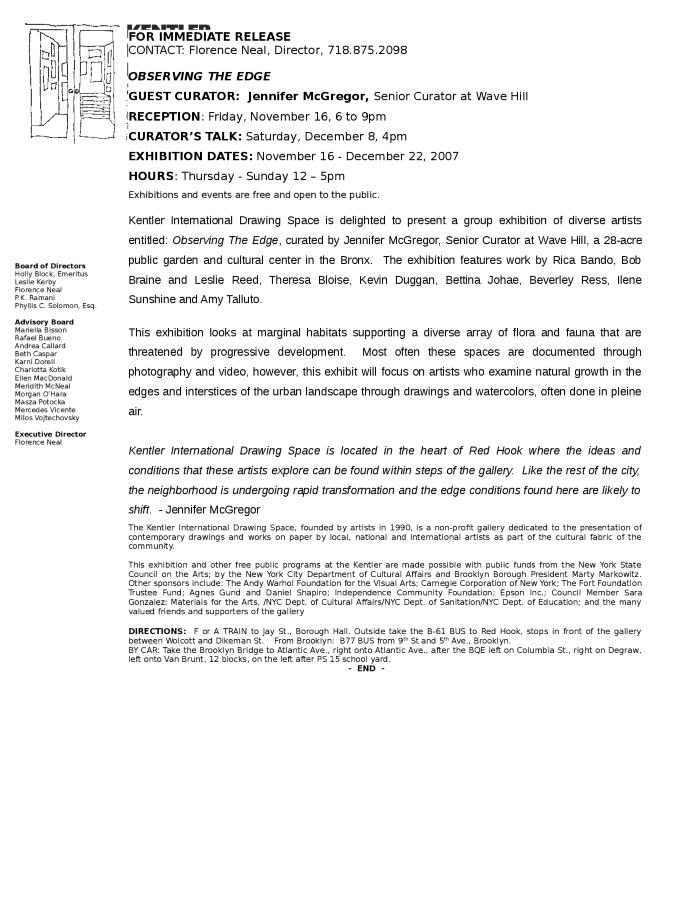 New York City’s iconic cityscape is generally associated with images of significant buildings, vistas and street life, however, immensely defining moments can be found at its edges. The city is in a perpetual state of transition with expansive development in every borough that endangers the empty lots, industrial wastelands and the vigorous ecosystems they harbor. The artists exhibited here seek out the interstices of the urban fabric on the city’s shifting edge that are often considered unsightly. Their practices involve intensive observation and they often employ a form of drawing to render their discoveries. Collectively the works in Observing the Edge act as a barometer of the relationship between people and nature and the ambivalent attitudes toward the nature in our midst.

Several artists employ methods of botanical observation and drawing to systematically catalogue urban flora. To create Bronx Lot Florilegium Bob Braine and Leslie Reed explored the diverse, yet overlooked, plant life flourishing in an empty lot in the Castle Hill section of the Bronx. They identified and recorded 59 different plant species found in a 15-square-foot plot. Using the traditional florilegium format they wrote about the origins, uses and characteristics of each plant and drew the entire specimen. This extensive undertaking involved repeated visits to the site as well as collecting and forcing many plants to document them in bloom. A selection of drawings and infrared aerial views of the site are exhibited here.

Kevin Duggan seeks out “feral botany” found off the beaten path. His Turf suite takes Albrecht Dürer’s 1503 masterpiece Der Grosse Rasenstuck (The Great Turf) as a departure point. He traces the survival techniques of the nine commonplace plants featured in Dürer’s painting. Disturbed Land explores the ways that plants migrate, compete and succeed in disrupted places. In the Modern Meadow plants are presented in contemporary urban context, along a highway barrier or next to a chain-link fence. Flourishapproaches the reproductive strategies that have enabled these plants to prosper. Duggan uses the accordion book format to combine detailed drawings of each plant with text, and displays each book on a shelf.

The city’s edge is in a rapid transition from post-industrial and post-shipping sites to co-ops and condos. Theresa Bloise focuses on architecture and remnants of the built environment as a way of coming to terms with the complexity of the urban experience. She foregrounds trash heaps that are an integral component of the urban landscape whether in situ in a scrap metal yard, or in transit on a barge. In Greenpoint Terminal the landscape conventions of foreground, middle and background are accentuated through the weight of the watercolor. The subject can be read as an abstraction as it appears to float, removed from its context, further accentuating this disconnect. /

Dedicated excursions through the city provide the source material for Bettina Johae’s work. To create borough edges, nyc, Johae engaged in the significant undertaking of circumventing the entire city, through each of the five boroughs, photographing its shore edge to convey both the land and the water. She has presented the project as a video slide show or a series of still photographs, and is currently developing a Web site. While some individual views may trigger viewer recognition of particular places, the collective work documents a rare view of the city’s vast edge. It also serves as an unusual document at a point in time when the waterfront is actively being redeveloped and refreshed with recreational and residential activity. Here she exhibits a collection of ten photographs from the Brooklyn series along with a hand-drawn map that indicates each location. Several views coincidentally relate to drawings by artists Bloise and Duggan.

Seeking out nature on a more intimate scale, Rica Bando records her observations of changing light over time in masterful lithographs. Frolic depicts a view from her DUMBO studio where the sky is framed by the adjacent rooftops and the Manhattan Bridge. The image draws attention to the sky, a frequently underestimated indicator of the urban mood. Dappled light floods the wall surface in Street light 4 in the morning, amplifying nature into an interior space through the light and the shadows of the houseplant. Small abstract drawings are exhibited that demonstrate her continued studies of light.

In her paintings Amy Talluto focuses on landscapes that are far removed from the urban environment and hybridizes her interpretations of nature. In her drawings she uses a mechanical pencil to explore the endless variations and sculptural qualities of trees. In the two exhibited drawings she examines planer sycamore trees in Downtown Brooklyn’s Cadman Plaza. In one drawing the vegetation is girdled by the street embankment and the viewer can sense the traffic whizzing by. The other drawing accentuates the sense of rhythm that the trees create in the park. / While many of the artists exhibited here observe specific aspects of the environment, Ilene Sunshine experiences it by collecting urban detritus. She forages along the city’s sidewalks to gather Christmas tree branches for her sculptural wall drawings. She transforms the inert, dried branches into a spatial drawing that conveys a sense of momentum and movement associated with the street. The branches literally push off of the wall creating a play between the branch, the negative space and the wall plane that is accentuated by the painting of the branch and the wall.

The sculptural drawings by Beverley Ress consistently involve intricately rendered natural elements — birds, leaves, roots. While her drawings are meticulous they are more personal than scientific. She isolates an ordinary bird or plant, and sets it apart from its context, then cuts and reforms the paper simulating a sense of imbalance that conveys the disjointed connection that we often have to the natural world. While not directly referencing the urban environment, the drawings metaphorically speak to contemporary uneasiness.

Kentler International Drawing Space is located in the heart of Red Hook where the ideas and conditions that these artists explore can be found within steps of the gallery. Like the rest of the city the neighborhood is undergoing rapid transformation and the edge conditions found here are likely to shift. In the way that Kevin Duggan looks back to a piece of turf depicted in 1503, it is intriguing to speculate how the natural interstices will be viewed in the future.