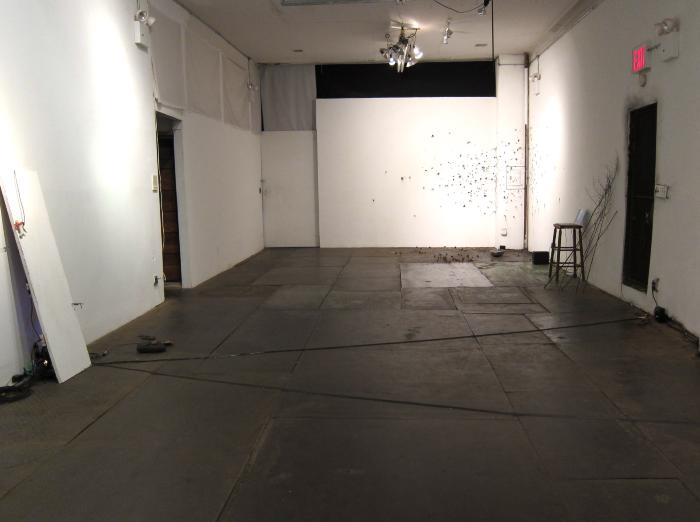 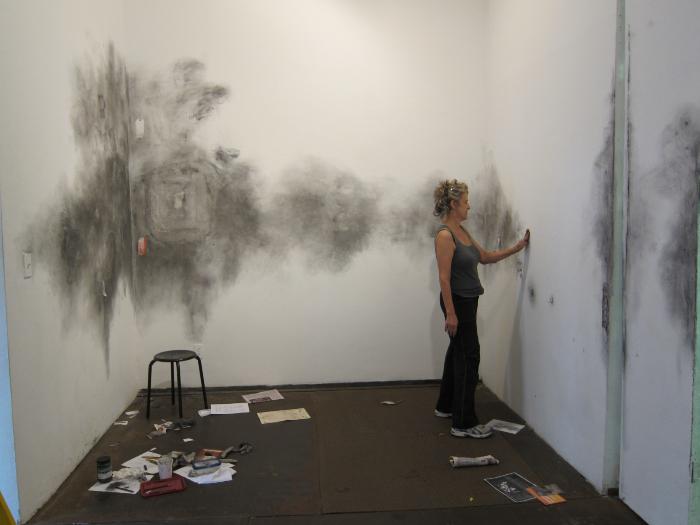 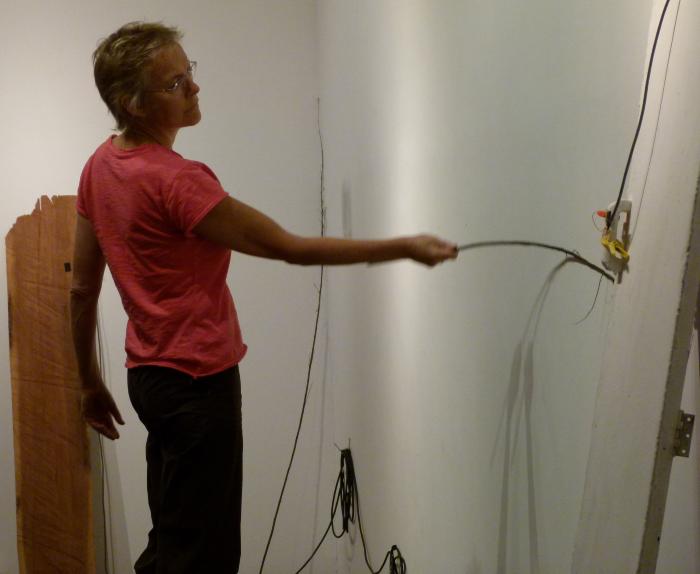 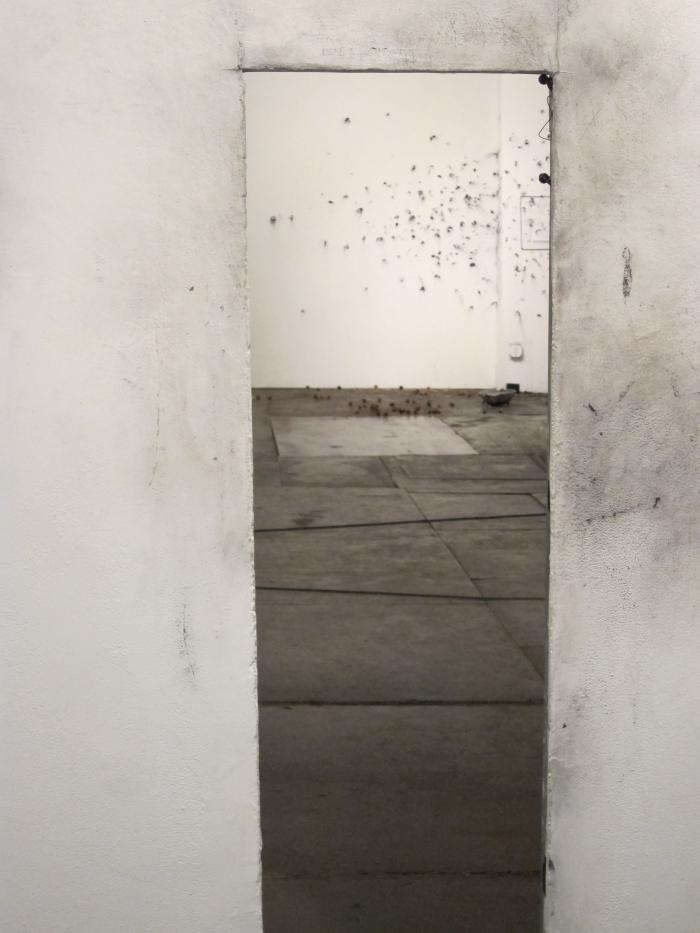 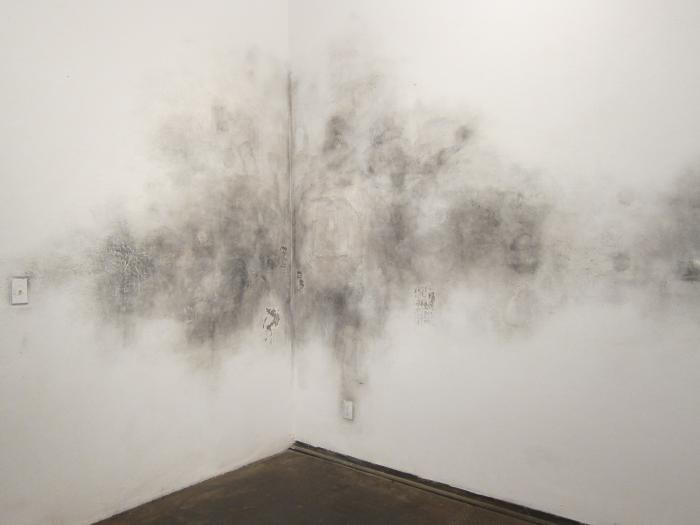 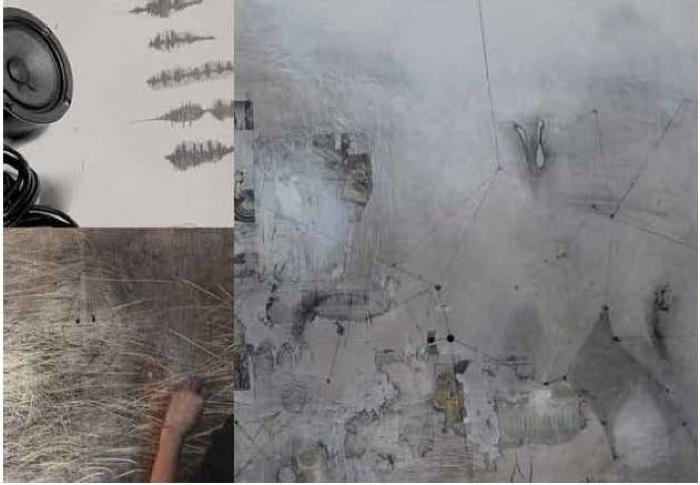 The Kentler International Drawing Space has a history of supporting a steady stream of innovative projects centered around the medium of drawing. Marking Space, a collaborative work by Ellen Moffat and Lezli Rubin-Kunda is one of the most unorthodox. As the artists themselves succinctly state: “ Marking Space is an interaction in and with a space, materials and media through marks and sounds. Our exploration is the relationship of sound and drawing—the sound of drawing/the drawing of sound. Our project is a conceptual, process-based, collaborative inquiry that includes in-situ production, installation and performance. The project reflects our independent practices as artists as well as a deeper shared philosophical and poetic investigation. We are interested in questions of knowing/not knowing, presence/absence, visible/invisible, doing/undoing and not doing.”

In their installation, drawing is omnipresent, transformed into a multitude of forms and materials, and coexists with the equally important aspects of performance and sound installation. It is not a single medium but the wide array of creative impulses that form the core of this conceptually complex and ever-evolving investigation. It is an inclusion of the viewers’ participation that renders its form essentially open, never truly completed.

The project is about mapping a space, about recognizing its seemingly hidden characteristics, ever present but not perceived until the artists’ actions allowed them to be fully revealed. In the first space Rubin-Kunda used charcoal powder to rub the walls with gentle, almost caressing gestures. The hidden features of the surface were gradually exposed, the seeming imperfections and incidental architectural elements growing into the composition of alternating dark and light areas. The space was activated through the artist’s performative involvement. Its characteristics are further exposed by our registering of its acoustics. Recorded sound plays through earphones from a small mp3 player attached to a vertical pipe in the corner of the room. The sound suggests movement within the pipe. This, however, is deceptive: Moffat captured and recorded the sound as improvisation by playing fixtures and found objects (a radiator, pipes, steel grating) in the second gallery space. The looped sound in low volume shifts the function of the pipe from its purely utilitarian value to sound instrumentation and compositional element.

The large inner space, with its metal plates covering the floor, and other fixtures allowed for experimentation with combinations of sound and drawing elements. As we enter it through the narrow opening we register a low crackling sound. A second small mp3 player, attached to the door frame using magnets, transmits looped sound that was also generated in the gallery environment.

Experiencing the new environs and incorporating some of the visual and sonic discoveries into their pieces is an integral part of these artists’ practice. Before beginning the work at the gallery they took long exploratory walks through Red Hook. They were attracted to its abundant greenery, rough exterior and the proximity to the old docks. Never overdeveloped, Red Hook emits a feeling of the past, which attains an almost physical dimension. When the artist is rubbing the wall with charcoal discovering its history she is not only mapping the space but also positioning herself within it through her gesture. Her exploration evolves in time—it is a performance with a resulting wall drawing. The artists responded to the genius loci by working closely with the given features, accentuating them for our recognition.

The sound installation introduced in the entrance gallery is further developed in the larger space, where the spatial, audio and tactile experiences are fully combined. The small door, that normally separates the galleries, was removed in an almost symbolic gesture suggesting the fluidity of space and the seamless whole of the audio and the visual. The door was repositioned in the larger gallery—leaned against the wall—as an independent object as well as an ad hoc sonic instrument. Onto its surface a cluster of wires and contact microphones picked up sound when they or the surface of the door were touched. Similarly a wide wooden plank leans against an adjacent wall, its surface also miked. In addition, other objects and surfaces were fitted with contact microphones. Sound was output through mini amplifiers placed at varying distances from the interface boards and objects to draw the sound through space. | During their walks the artists gathered numerous objects, stones, twigs, shells and sometimes metal implements. These were placed around the soundboard interfaces and used in the artists’ performance, then left to be used by the public as sound generating devices.

The artists were particularly attracted to the bulbous seed pods of sycamores that are strewn on the ground at this time of year. The prickly pods shaped like miniature medieval spiked flails were used to generate sound and to make marks. Dipped into graphite powder and thrown against the wall they leave a distinctive trace; falling they arrange themselves into an installation. Thrown against a metal bowl temporarily attached to the wall, the sound of the impact was captured by contact microphones placed within the bowl and on the floor, creating a syncopated rhythm of plops and thunks. Played as a loop on computer speakers, the sound offered a double soundtrack—for the wall marks and for alternating images of the artists’ actions, displayed on a computer screen.

Marking Space is a low-tech participatory installation where the natural and manmade found materials are part of the visual structure and of the sound generation. | In one corner of the room there is a small aluminum case that was used for transporting the sound and electronic equipment. It contains tools and supplies used during the installation. Contact microphones, clips to attach them, seed pods, shells, pebbles and twigs are all included. It catalogs forms and ideas present throughout the project, inadvertently calling to mind the tradition of boxed artifacts famously started by Marcel Duchamp.

The installation reveals itself over time. There are no bells and whistles that designate what to look at and what to admire. It is our own willingness to get involved, to concentrate on details and to explore subtle impulses present throughout the space that builds the rewarding experience of understanding and recognition. Curiosity and inquisitiveness of both the artists and the viewer is an integral part of the work. When moving a thin metal rod or a branch on an amplified surface the installation incorporates the viewer into the work. Thus it is never finite but changing with each live action of any random participant.

Gesture is translated into sound as an instrument and inquiry into the relationship of mark-making and sound-making where the body is the conduit and the performative character of the whole action is asserted. | Indirectly the artists pay tribute to the philosophy of John Cage, celebrating and incorporating the mundane and the chance encounters, and allowing for the unpredictable results. The artists explore the synergy of the visual and the acoustic, echoing Cage’s thoughts expressed in his writing for 45’ For a Speaker : “ I have noticed that music is liveliest for me when listening for instance doesn’t distract me from seeing. One should take music very naturally.” - Charlotta Kotik