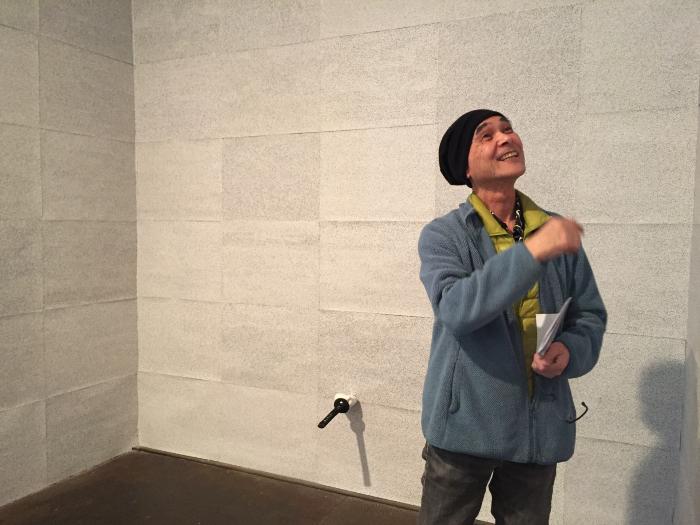 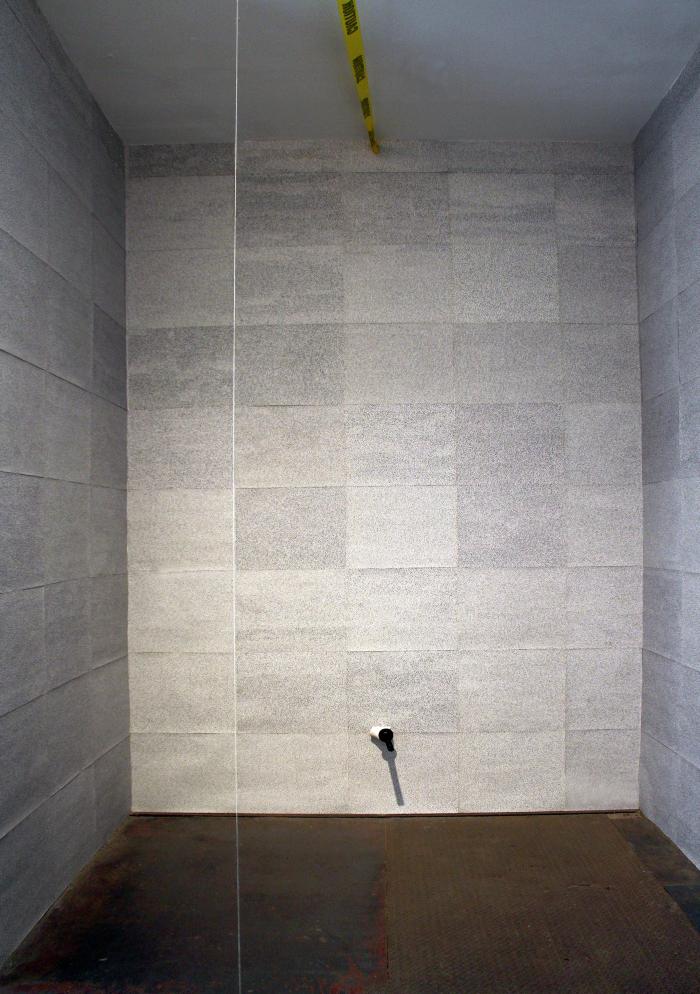 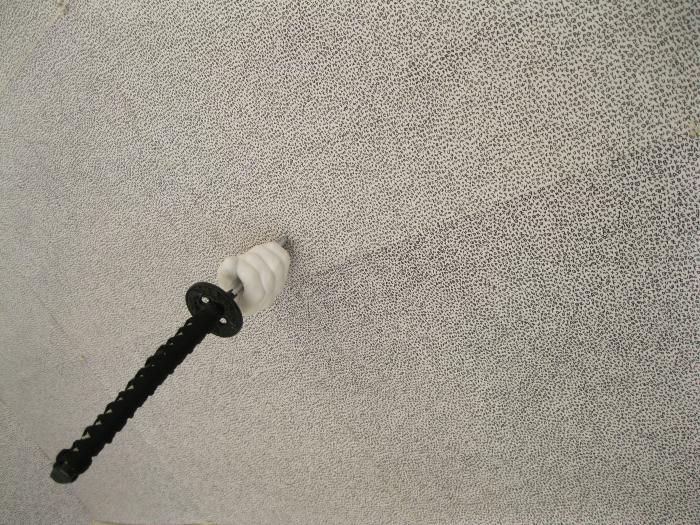 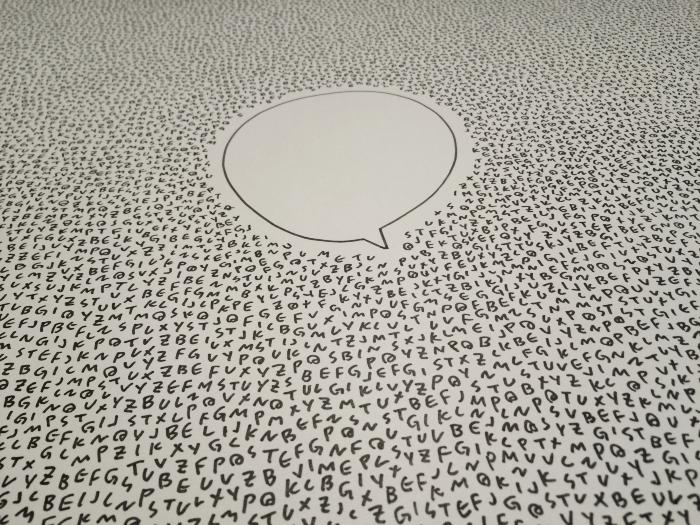 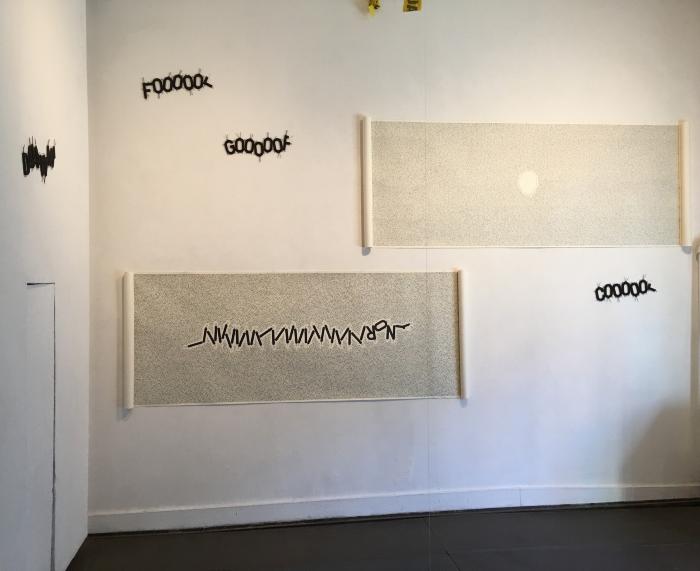 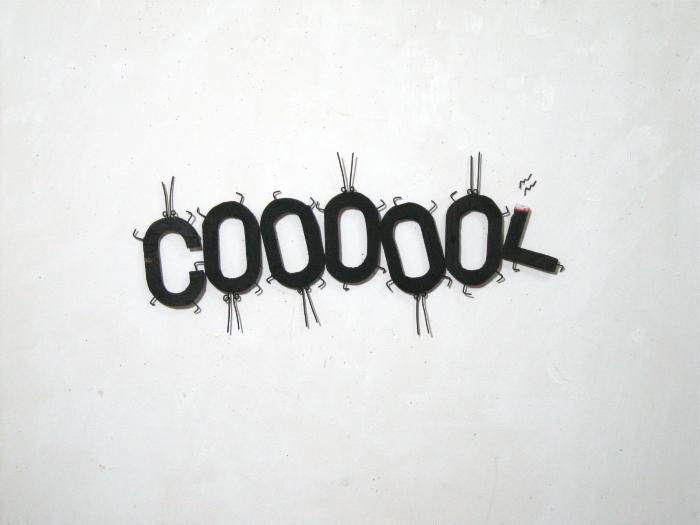 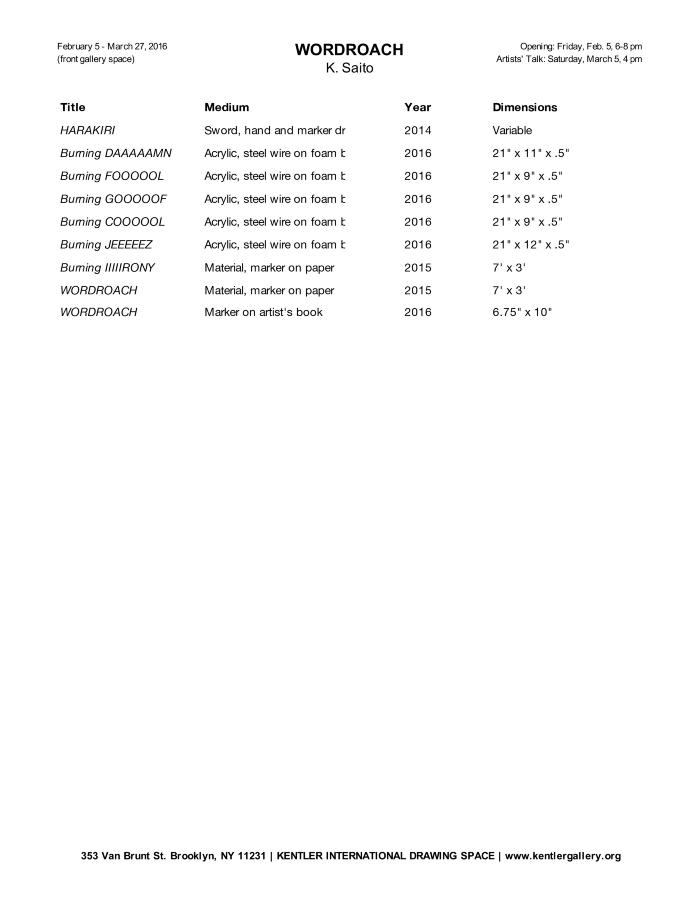 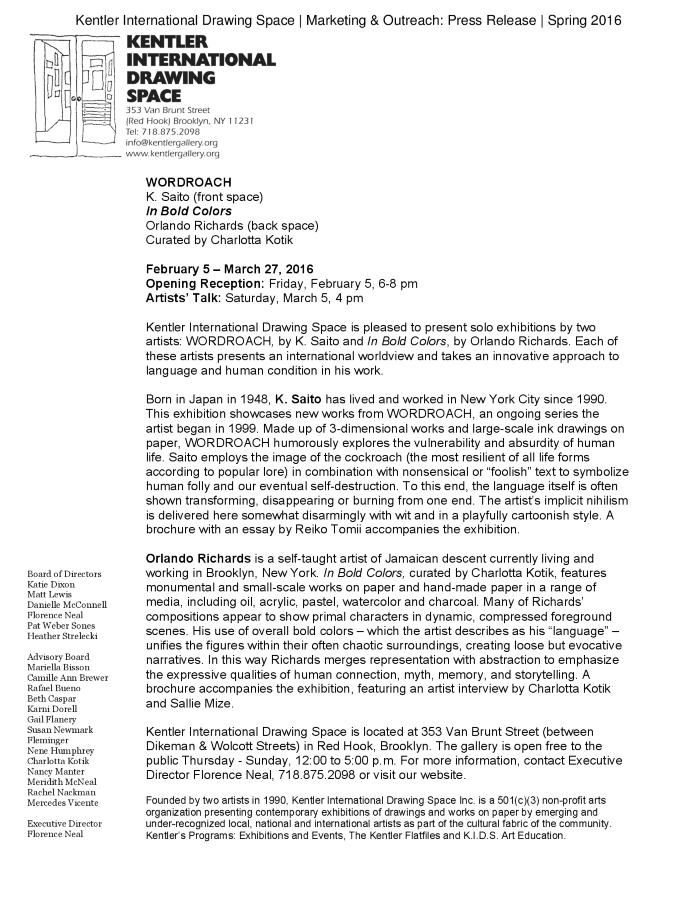 Humans are foolish.
Humans have words, so their desire is limitless.
Limitless—until they destroy themselves.
It is an ironical fate.

So declares the artist Kiyomitsu Saito in presenting WORDROACH, a series he created in 1999, in which he compares humankind to the most ubiquitous and invulnerable insect, the cockroach. What separates us humans from roaches are our big brains, the seat of our intelligence, which is embodied by language. It is often said that cockroaches will survive long after humankind may perish in nuclear calamities brought about by that very intelligence. In a sense, humankind is as foolish as—or even more foolish than— the brainless pest. With this ironic reckoning, Saito concocted his signature concept, WORDROACH.

Despite the artist’s harsh indictment of humankind, WORDROACH are humorous creatures roaming on the walls and in the sea of alphabets. Each WORDROACH work consists of “alphabet roaches,” if you will, with a pair of round eyes, which extend into antennae, and four limbs (this last feature being just like that of humans). Alphabet roaches are combined to make choice words, such as fool and contradiction. WORDROACH works often stutter, as in COOOOL or “irony” spelled with a whopping thirty-one I’s. (Saito told me that he often stutters.) Alphabet roaches made of wood sheets or foamcore can be arranged in different configurations on the wall. In an extreme case, a word may even span from the ceiling to the floor, say, with one letter repeating in a long series. When drawn on paper, a word is surrounded by tiny alphabets (sans the ones that constitute the word). Sometimes, he just spells BLAH BLAH BLAH for meaningless monologue or draws one or a few blank speech balloons.

An observant viewer may notice that the last letter of COOOOL is partial. That is to say, the L is “burning” on its end, like incense, smoldering red with some smoke duly represented. It is a kind of joke, inspired by the Japanese anti-mosquito coil, a familiar household item that slowly burns all night long. In fact, these WORDROACH works are titled with burning before the featured word, as in burningCOOOOOL. Funny at first look, however, the implication is not so amusing: although sturdy cockroaches will not be stopped by the mosquito repellent, “wordroaches,” namely humans¸ may, over the long run, succumb to the radioactive fire they invented. Ultimately, Saito’s work concerns his reflection on the frailty and absurdity of life, which perhaps sets his language-based work apart from Ed Ruscha’s whimsical and exquisite graphism or Christopher Wool’s street-inspired in-your-face formalism. Notably, his intent observation of the human condition permeates his entire oeuvre dating back to the 1970s.

Born in 1948 in the city of Okayama, Saito began his artistic career in Japan, well before his arrival in New York. But he did not set out to become an artist, and the art he practiced in his hometown was of a kind different from his New York work. Good at drawing from childhood, he studied at a local technical high school. It was the mid-1960s, when Japan enjoyed a booming economy. Jobs were plentiful for high-school graduates with technical training at a shipyard that Mitsui, a major zaibatsu, or industrial and financial business conglomerate, maintained in Tamano, just south of Okayama. He promptly gained a position at its design department. However, no sooner had he joined the teeming ranks of teenage workers who sustained the country’s phenomenal industrial growth, than he realized that something was amiss. A doubt arose in his mind as to whether he would end his life as a shipyard design clerk. Having once enjoyed carefree youthful years, he was suddenly confronted by the walls of society encroaching upon him. To him, “society” was a haunting enigma through which he had to live.

Thanks to his friends, he found respite in art, in effect teaching himself how to paint in oil. The works he produced in the 1970s, depicting working-class gamblers at a nearby bicycle race track, reveal farmers and factory workers in semi-abstraction. These figures are taciturn, as though in deep meditation, somewhat recalling the somber mood of Ben Shahn. The canvases were competent enough to be accepted at the prefecture salon as well as the salon hosted by Shunyōkai (meaning Spring Sun Society), a nationwide modernist painting organization that is part of the conservative art establishment. Yet, here again, he began to feel constrained amid the complacency and narrowmindedness of salon painters.

In 1990, at the age of forty-two, Saito made a daring move: he quit his shipyard job and came to New York all by himself. (He has since made it a rule to spend a couple of summer months with his wife in Japan every year.) He was by then vaguely aware of the existence of contemporary art outside establishment practices, but New York offered him a hands-on learning opportunity. He also had abundant time to read philosophy and Zen in order to deepen his thoughts on life and society, two urgent concerns of his. Above all, he found himself in an absolutely free environment in which he could give form to his ideas without concern about what others might think—which had been a perennial worry for him in Japan.

He made rapid progress. In 1990 he launched the Foolish series, which first took the format of shaped panels (Foolish Forms) and cartoonish drawing (Foolish Drawing). The series sustained his prolific production, with Foolish Drawing eventually evolving into Foolish Animations in 2005. A statement about the Foolish series eloquently tells of an insight he gained in his new home:

To the ongoing Foolish series, he added in 1995 a new object-based series, Trap, which inspired the latest WORDROACH series. A moderately modernist painter has thus morphed into an adept contemporary artist who works in both large and small scale, occasionally incorporating readymade objects, as with his installation work, Harakiri. At once conceptual and expressive, his WORDROACH series demonstrates the achievement of Saito, who aspires to create art as “an intellectual adventure that liberates the human spirit into the infinite yonder.”