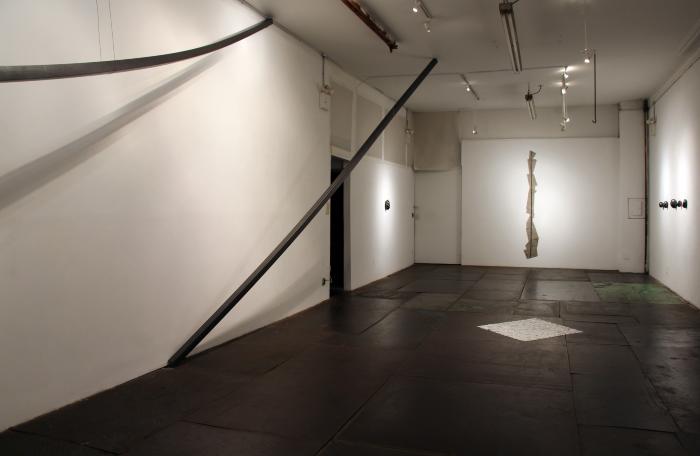 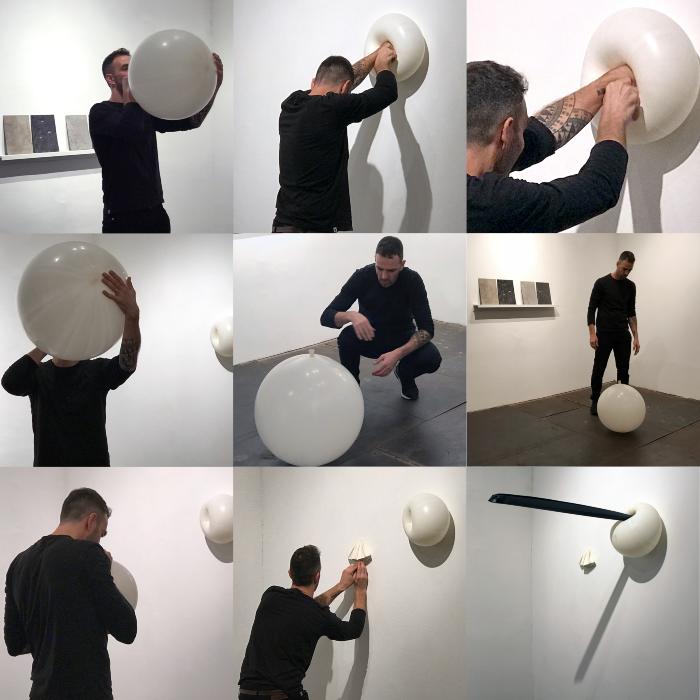 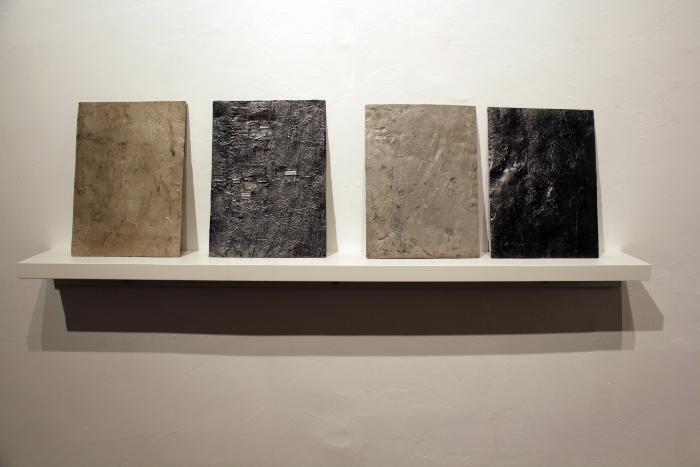 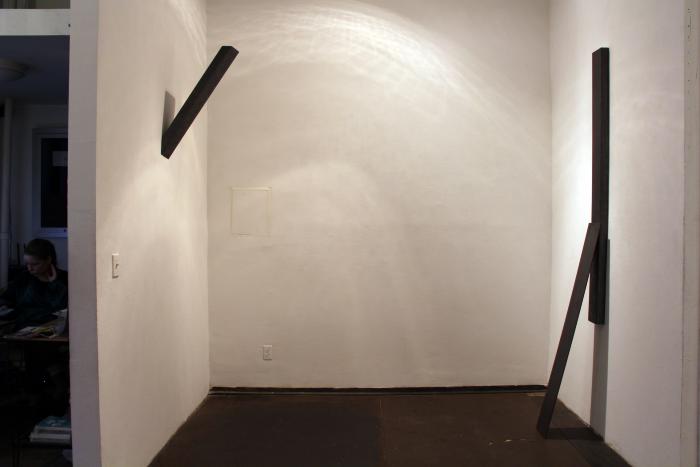 Continuous (Support), paper and graphite (on the left) and Specified (Persistence), paper, graphite and metal (on the right) 2018 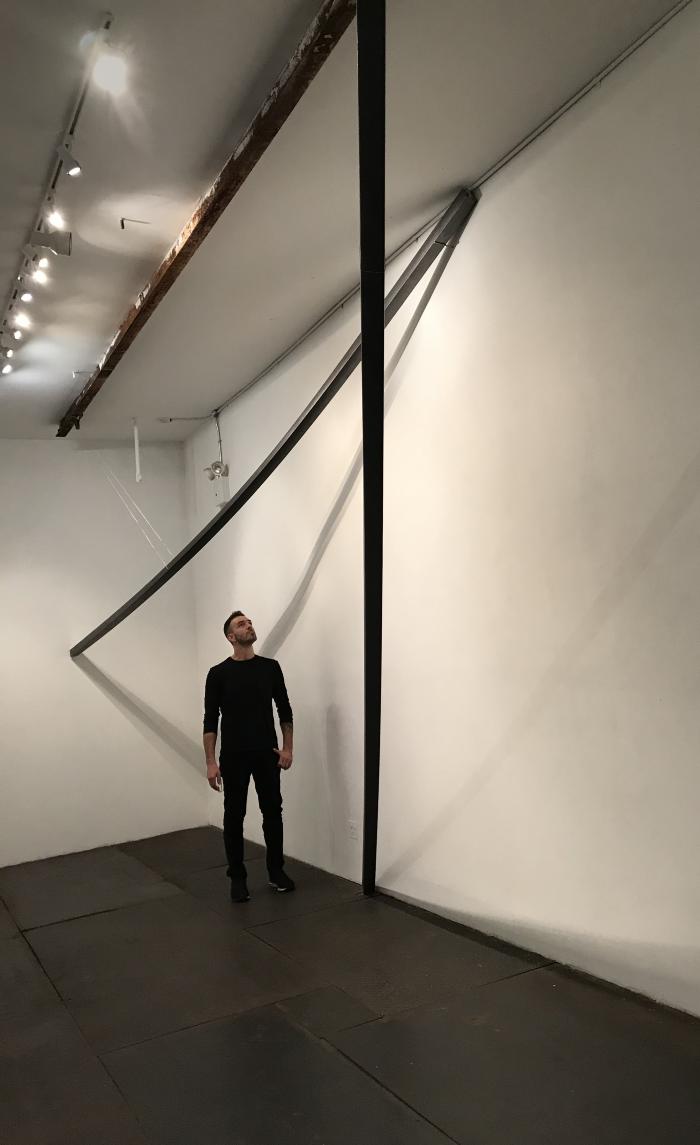 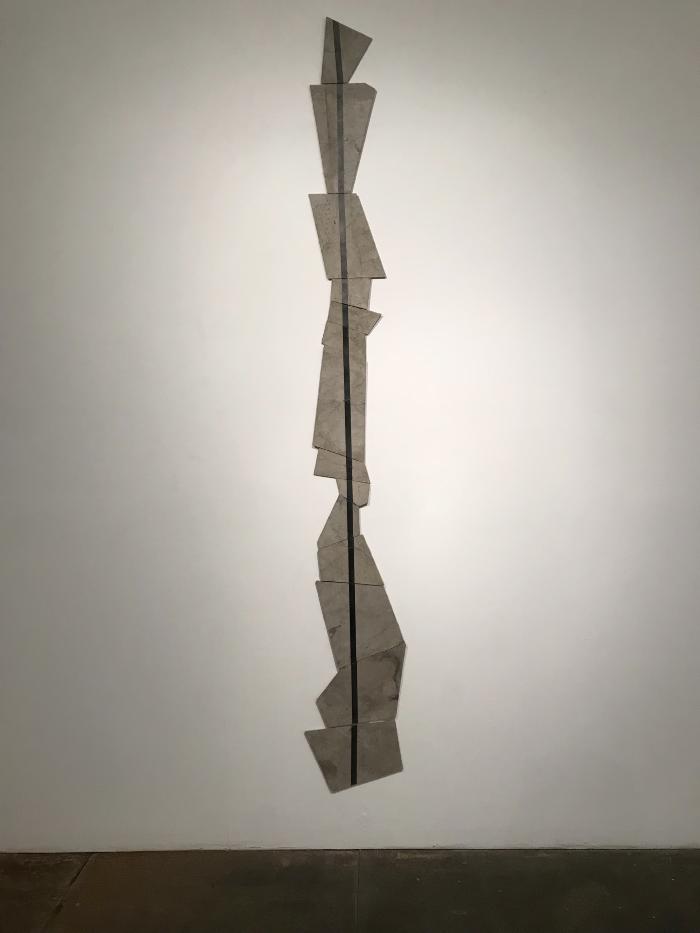 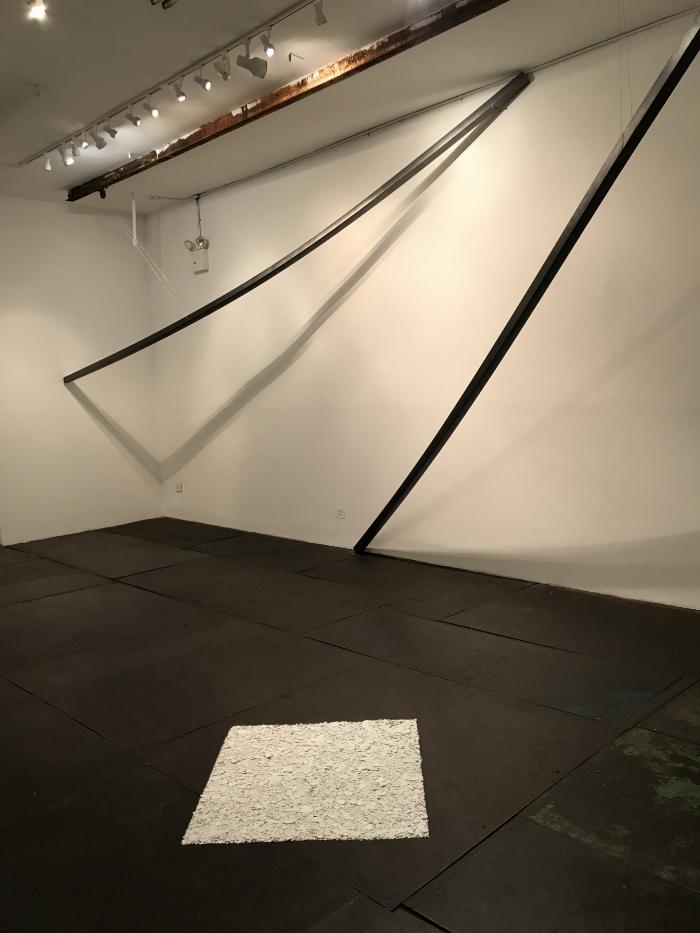 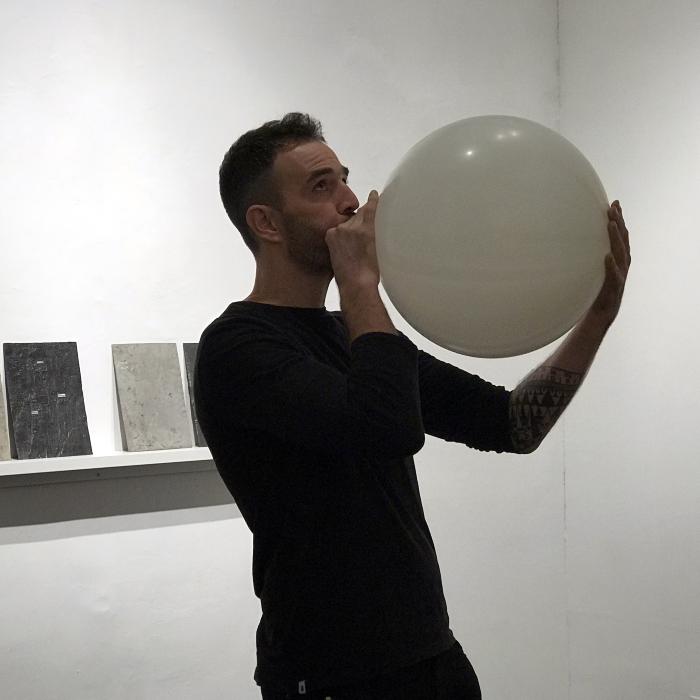 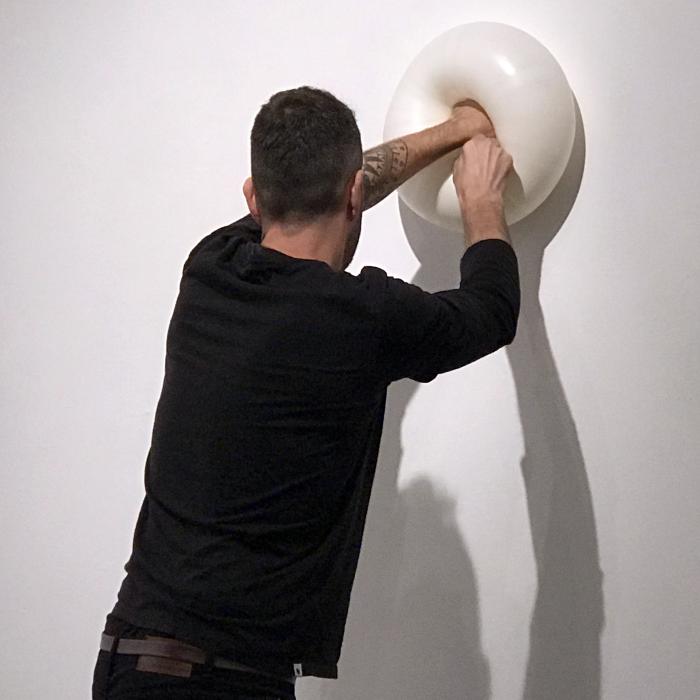 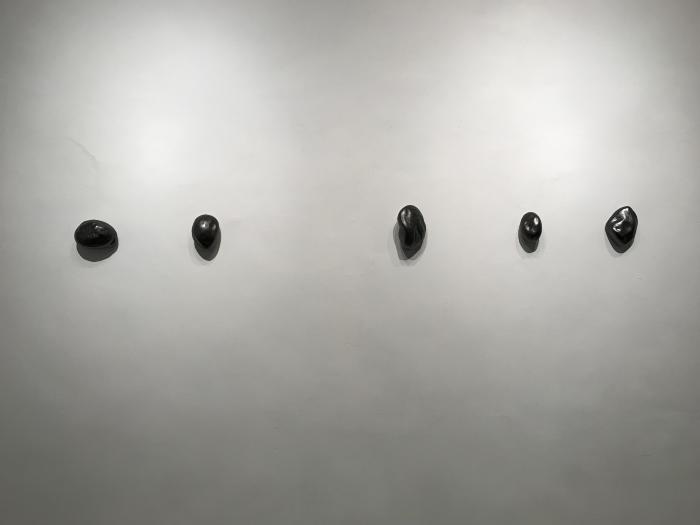 What Can People Do//I Would Still, concrete and graphite, 2018 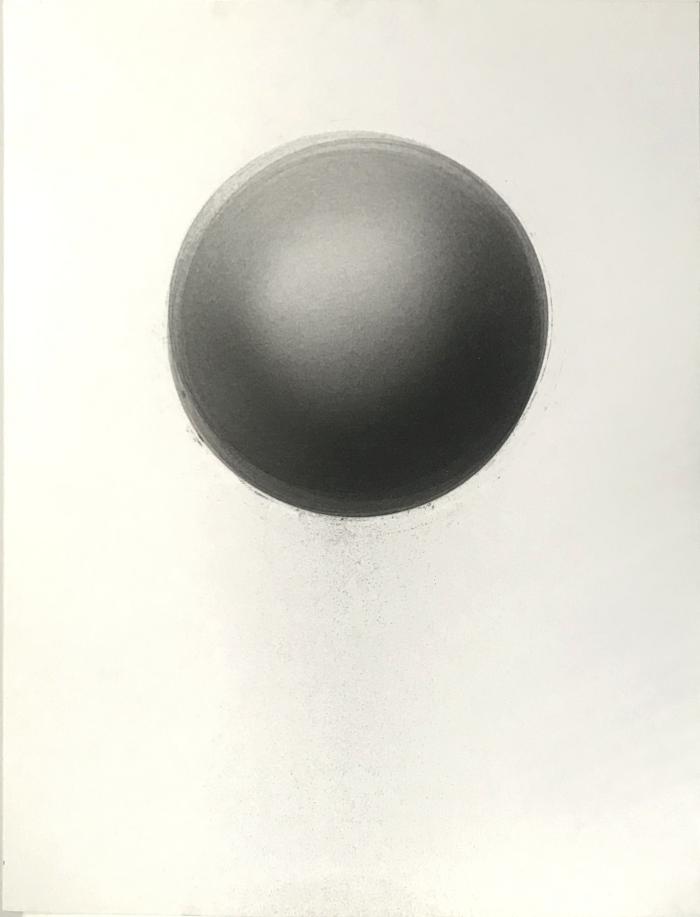 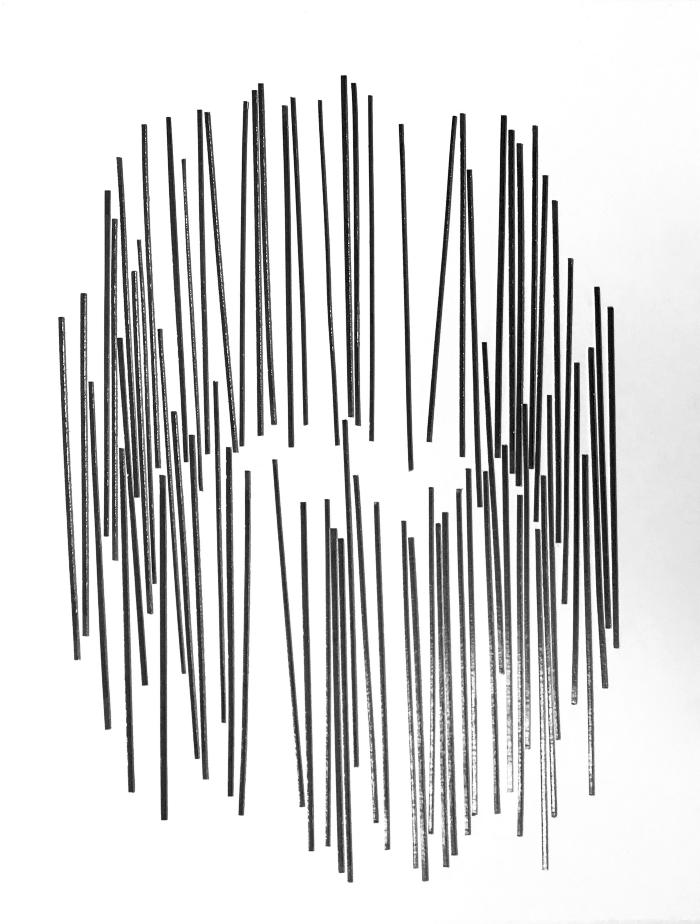 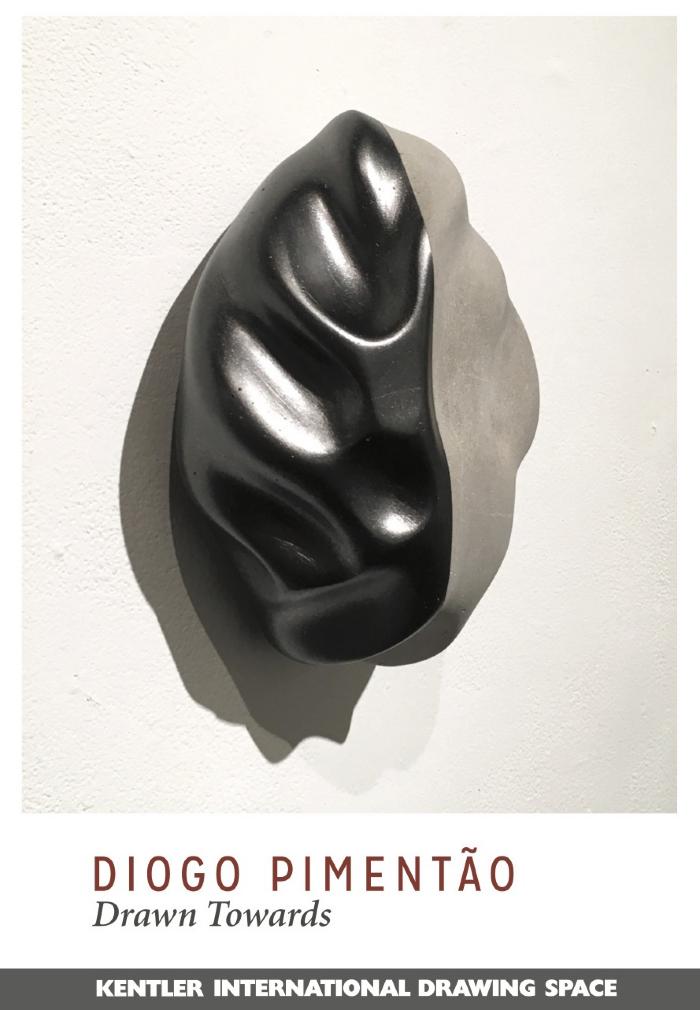 Born in 1973, the Portuguese, London-based artist Diogo Pimentão is part of a generation of artists who take drawing to surprising new territories, rooted, in his case, in the legacy of abstraction, minimal, and postminimal art. This new type of graphic expression expands the eye-hand dynamic to the whole body and real space. It is described by Jennifer R. Gross as “operat[ing] physically in and on the picture plane as an arena, a practice that enables one to express space not allegorically or philosophically, but tactilely, through bodily engagement.”[1]

Pimentão’s drawings are indeed a process of engagement with his own body but also with the environment they are placed in. This starts in the studio, where a unique use of graphite and paper as a seemingly infinite surface that he cuts, folds, polishes, and sometimes scratches, occurs in a semi-meditative state. He often notes that his work is in direct relation to the human scale and its potential relation with indoor spaces and their architecture. Instinctive, sensual, at times enigmatic (one wonders how the paper doesn’t show its edges in certain free-standing drawing-sculptures), Pimentão’s work places the viewer in direct relation with an object in the space; an object that does not represent anything, but rather presents itself. In that sense, Pimentão welcomes the legacy of both minimal and abstract monochromatic art, with a particular resonance with Ad Reinhardt or, closer to his own roots, the Portuguese artist Fernando Calhau, for whom he worked as an assistant before his untimely death in 2002 (Calhau was born in 1948).

This is not to say that Pimentão produces work in situ or for a specific space. Rather, his drawings and sculptures seem to be used as tools to assert the physical qualities of the walls, floors, and ceilings of the exhibition space he is invited to explore. Here, a paper sculpture resembling a metal bar leans on another standing against a wall; there, a rodlike structure intersects with a beam near the ceiling, and finally, a group of sculptures looking like solidified drops of black ink bearing written marks are assembled, like a materialized train of thought. What connects this body of work, beyond the tools of drawing, is its understated vulnerability underneath an almost sturdy appearance.

When talking about his work, Pimentão often highlights the auditory aspect of his drawing practice. In his first performance, Fraction (2005), graphite beads scratch, mark, hit, and brush against a very thick and wide sheet of paper folded into a cube, in repeated, almost choreographed, moves. It is an incredibly loud and exhausting performance, and also a blind drawing. His passion for contemporary dance, Yvonne Rainer in particular, and minimal music, is transposed to the paper, which becomes a trace of a ritual--ritual, because of the repetitive gestures needed to obtain such a thick layer of graphite that can be mistaken for a metallic surface, for instance. Ritual, also, because everything in the studio is used and reused: despite its oftentimes perfect finishing, the sculptures and drawings usually stem from residual items left over from previous works. There is a circularity to Pimentão’s studio practice. The drawings produced through forced impact of graphite bits on a surface, such as Fraction, leave behind an amount of used graphite beads through which he pierces a hole, one by one, in order to produce a necklace, for instance (Intensionality, 2016). One can either perceive the used graphite as a useless remain or a sculpted material; it’s only a question of perspective, almost an ethical stance.

This interest in the residue and the trace, in the gesture and its mark, sometimes leads Pimentão to work with an even more malleable and humble material, cement. With it, he handcrafts oval sculptures with a method that allows for the material to contribute to its shape: his hands imprint on the cement until it dries up (the series Matter, 2018). Uncannily similar to a brain, these sculptures’ left hemispheres are then half-covered with a layer of graphite. Deceivingly sophisticated, Matter’s graphite surface does not exactly cover half of the oval shape; moreover, it is an alien material unbalancing the simplicity of the sculptural imprint. If some of his sculptures using paper and graphite test and transform the exhibition space, these new cement works with layers of graphite are more self-reflexive, linked with the abstract workings of the mind.

Reminding the viewer of the nervous center of the body, the series Matter relates to another one, (…) program, 2018, droplike graphite-covered cement sculptures bearing the imprinted traces of primary school notebooks. Pimentão’s interest in language, or, more specifically, in the ambivalent power of words, is a recurring and yet little acknowledged aspect of his work. The words and symbols on the (…) program sculptures are residues of knowledge, and traces of its academic testing. Through an aleatory process of selection, they also become ludic pieces of poetry. However, they can be assimilated to residual memories of normative processes of learning--unearthed exercises that, although similar for all, shape each child’s brain in a different manner.

There is certainly a playful component to these works--the demiurgic hand producing organic shapes and the tentative children’s writings treated like an archeological find. Nevertheless, a more profound scanning of the exhibition space will show something more profound: an artist using the inherited language of modernism to apprehend change, movement, development, adaptation. An artist pushing further the timeless instinct of mark making and mark collecting, thus appropriating a space that he was invited to inhabit for a while.

- Joana P. R. Neves is an independent writer and curator based in London.