Focus on the Flatfiles: See the Unseen 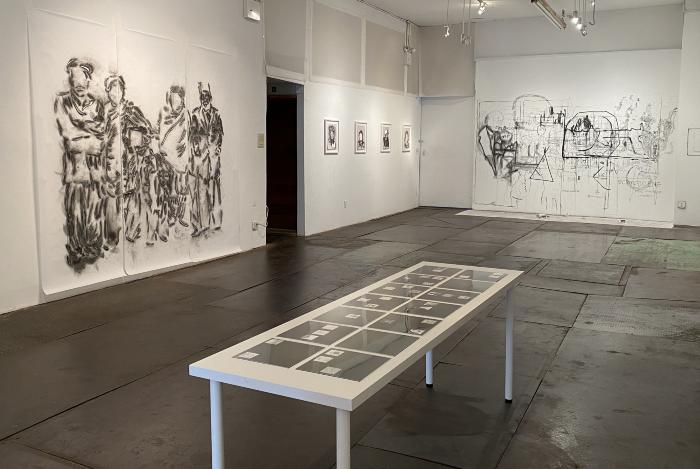 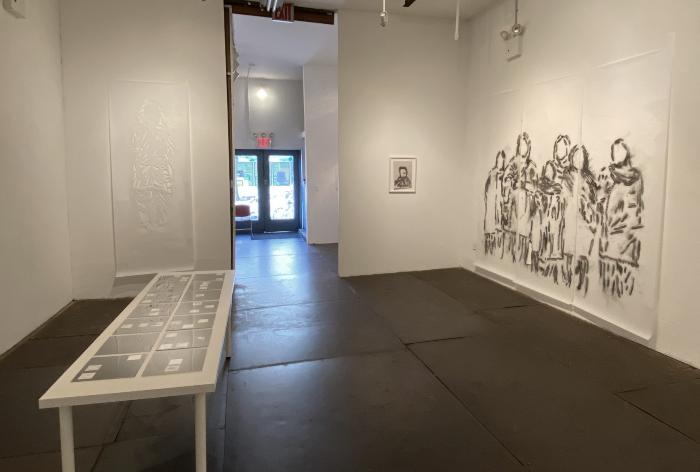 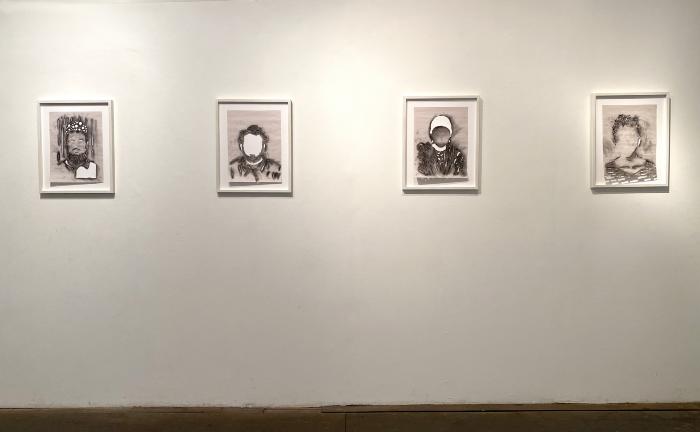 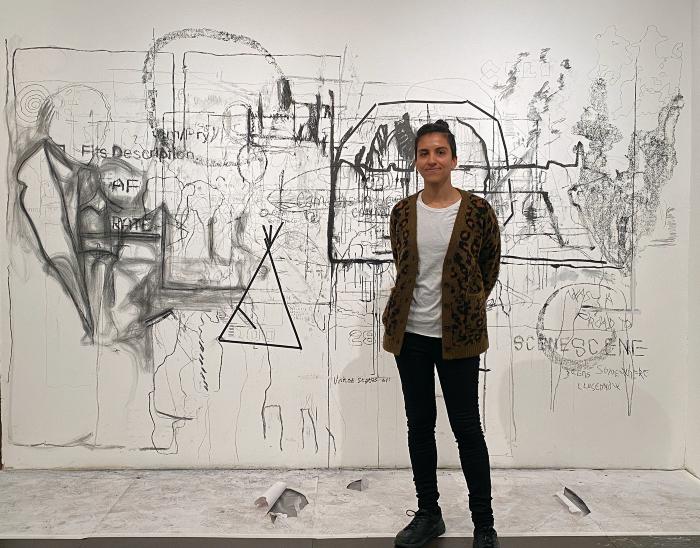 Sa'dia Rehman with "The Story of the Tracings of All the Persons Before Us and After Them," multimedia wall drawing from performance: February 21, 2020.

Sa'dia Rehman with participants in the performance of “The Story of the Tracings of All the Persons Before Us and After Them”, 1 hour, February 21, 2020. 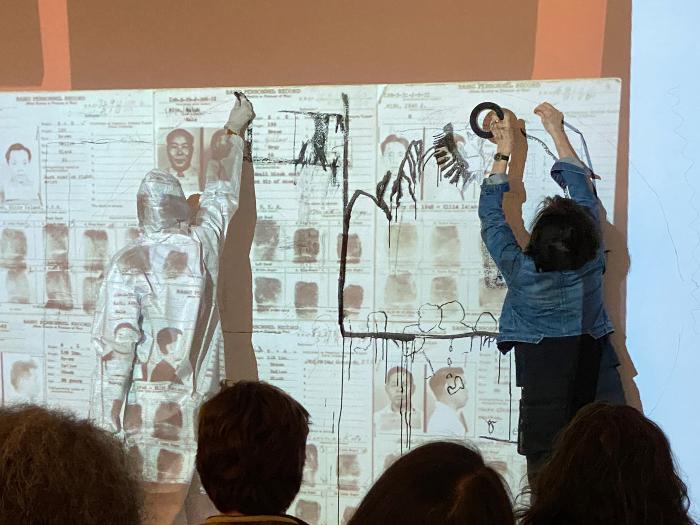 Participants drawing in the performance of “The Story of the Tracings of All the Persons Before Us and After Them”, February 21, 2020 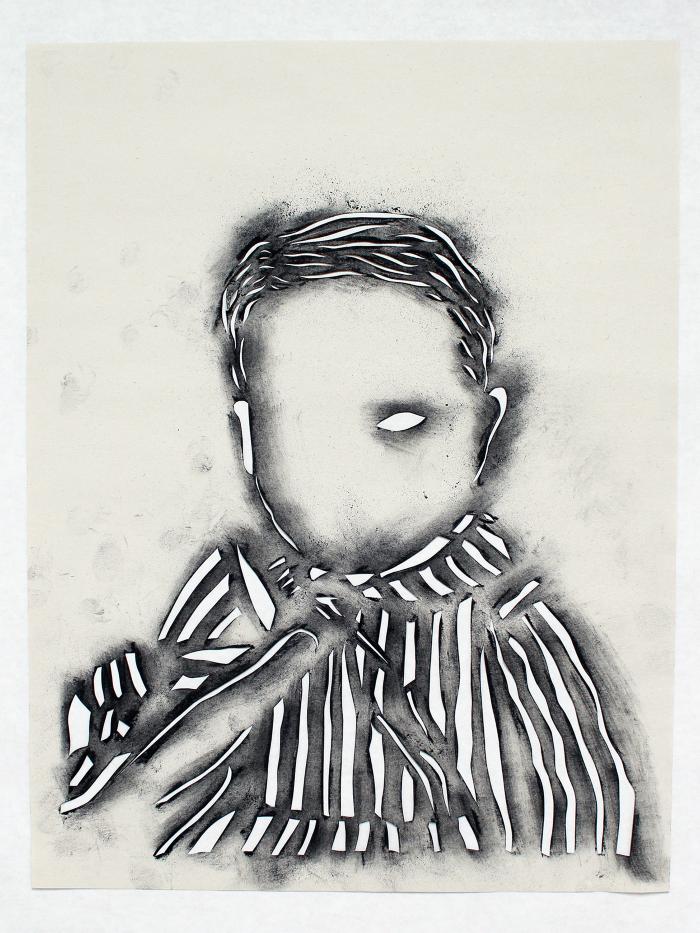 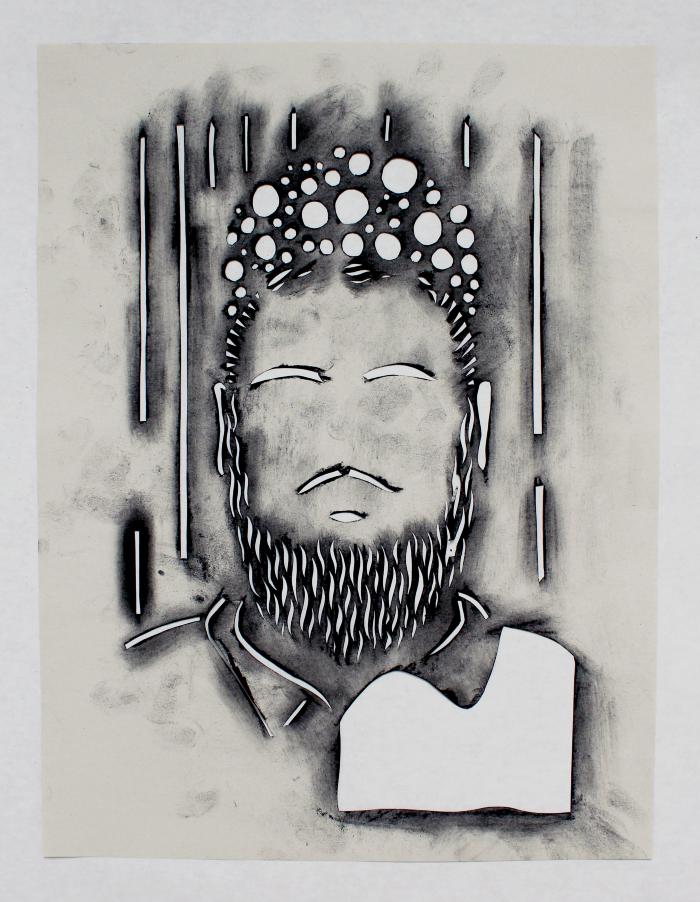 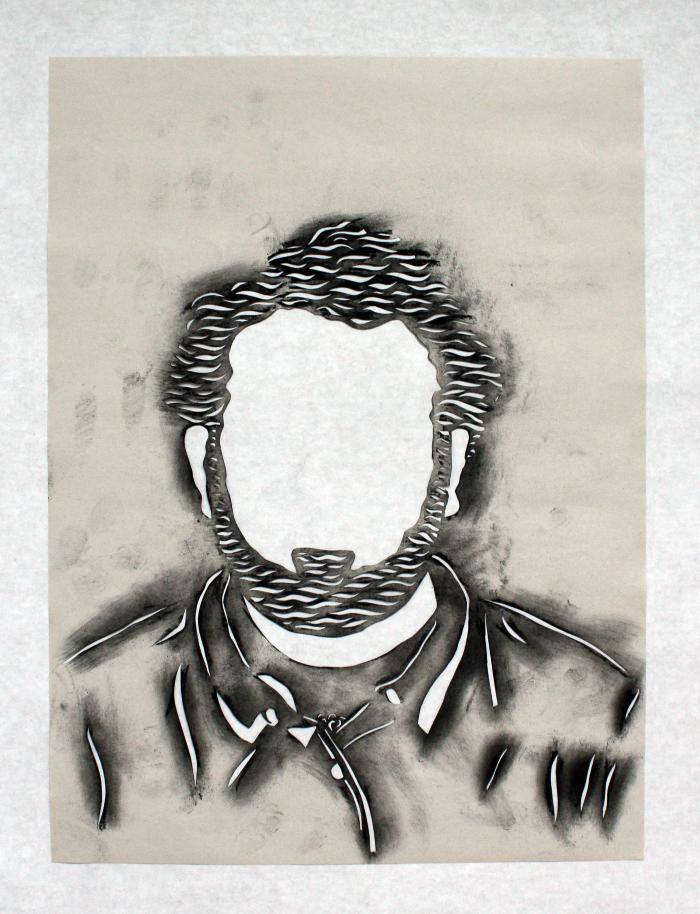 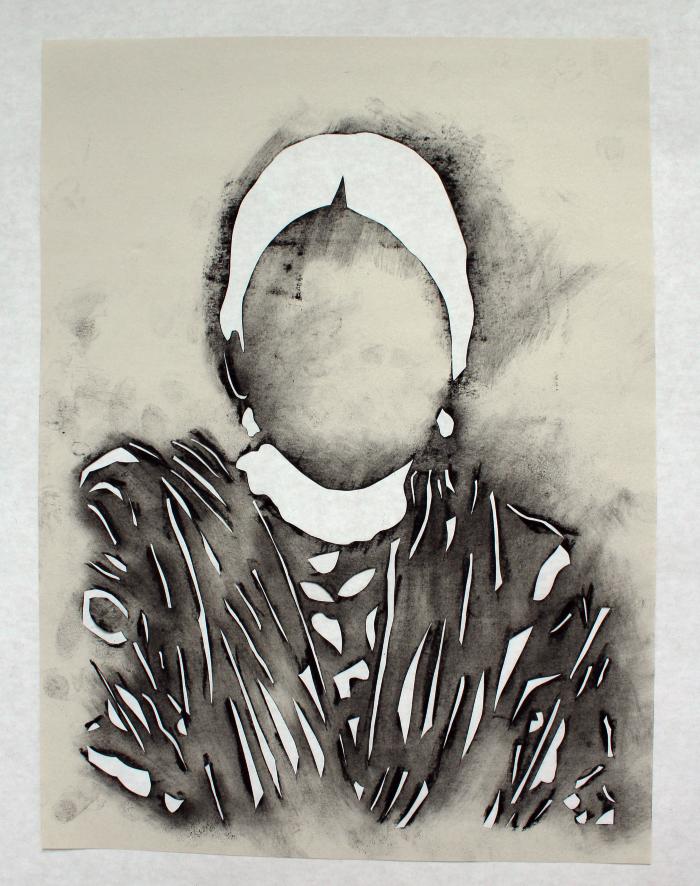 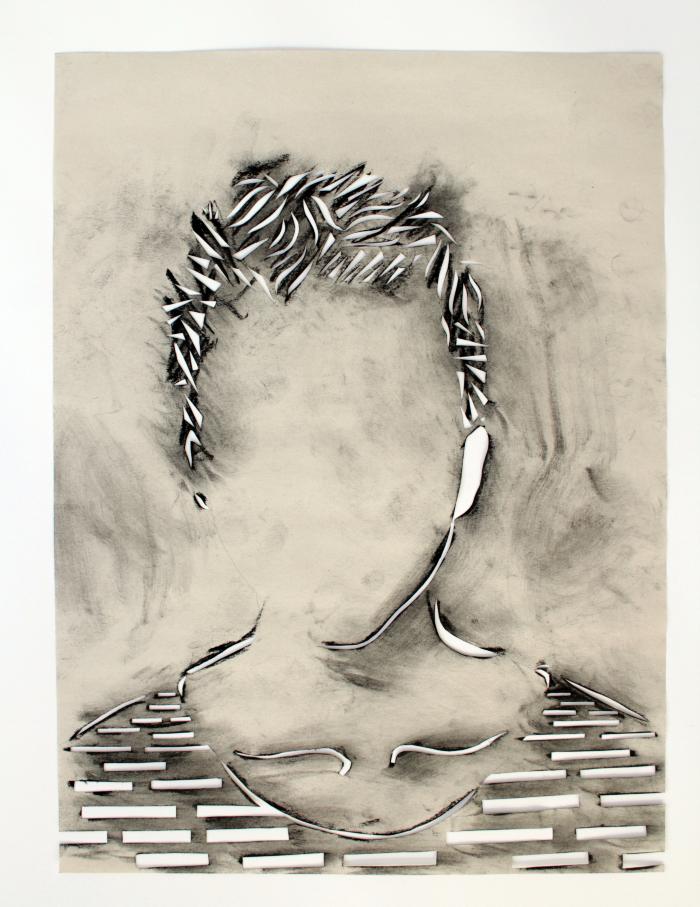 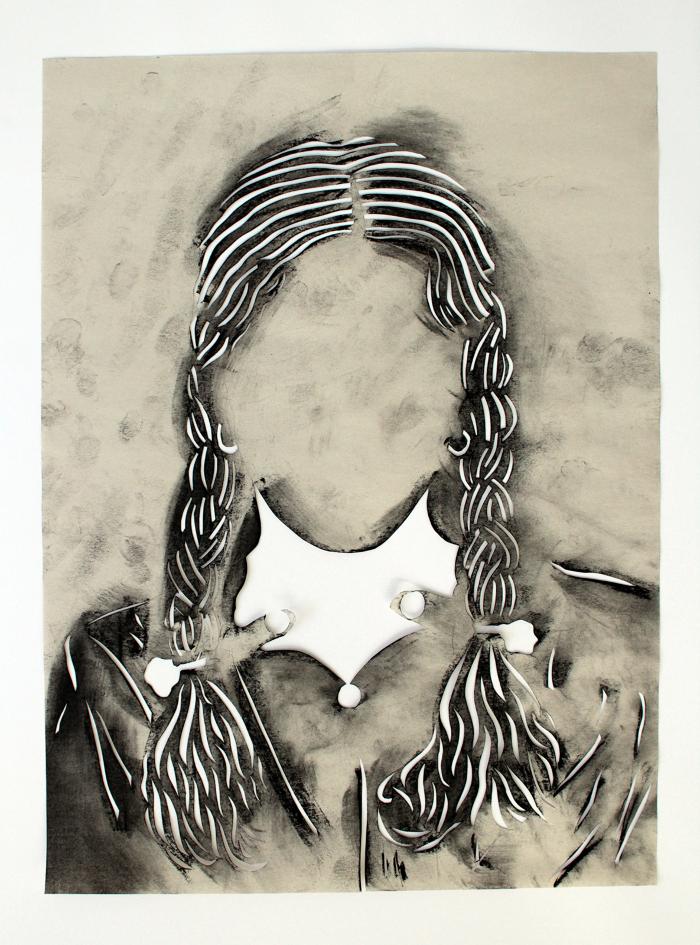 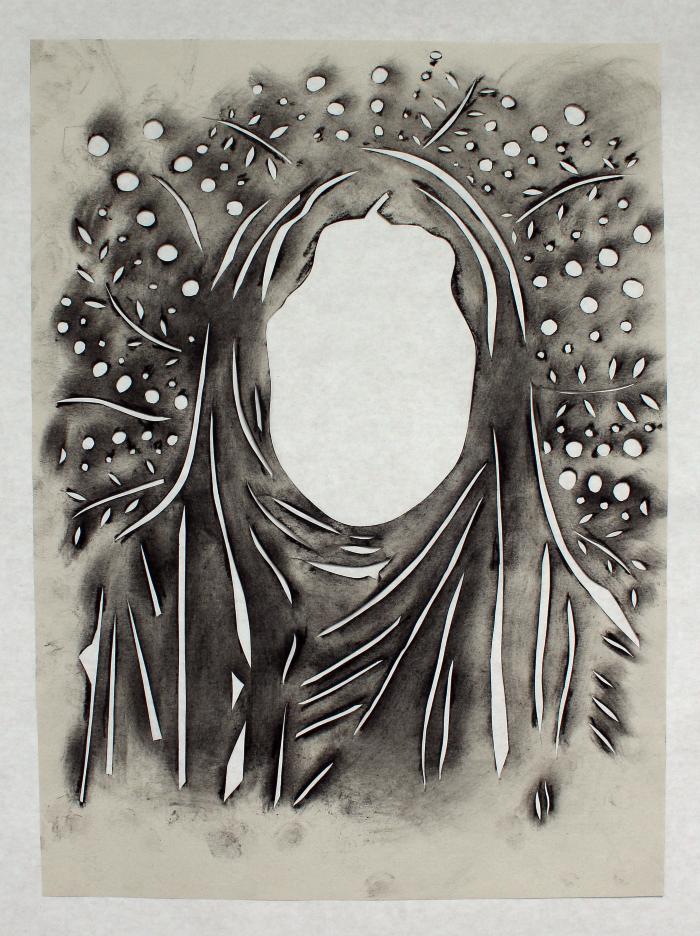 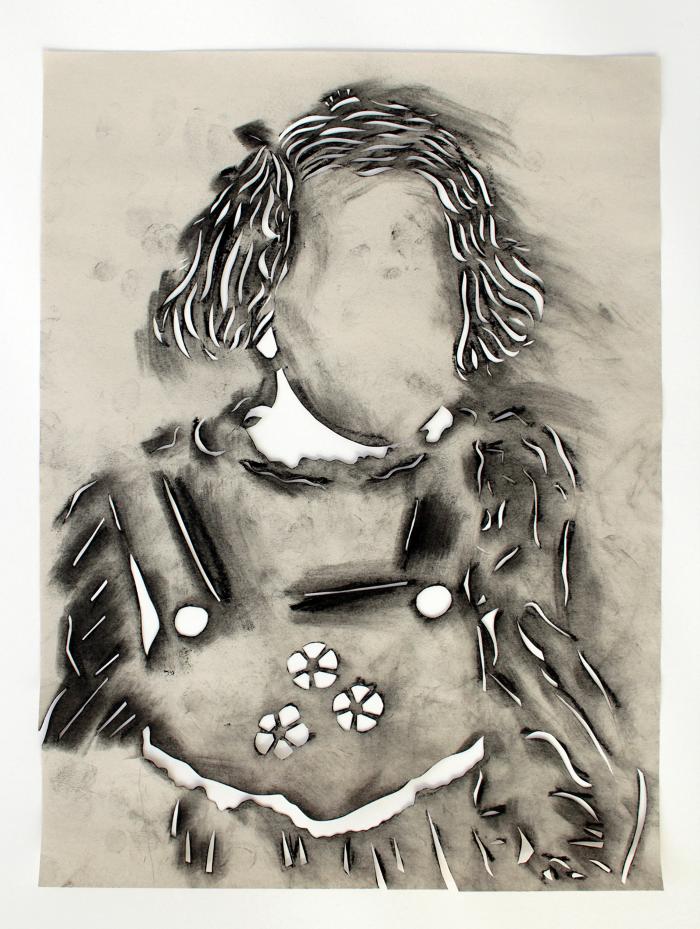 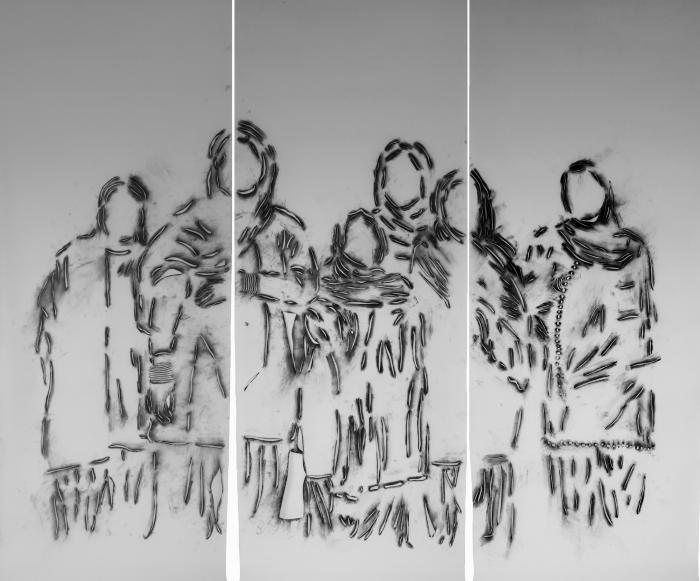 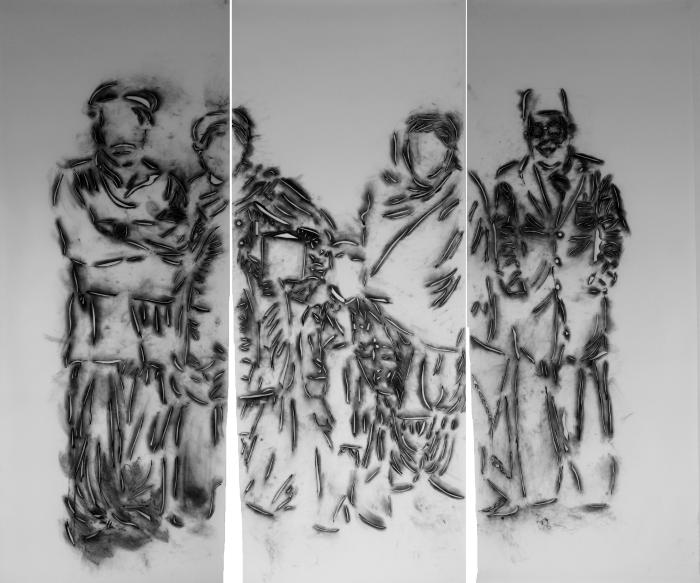 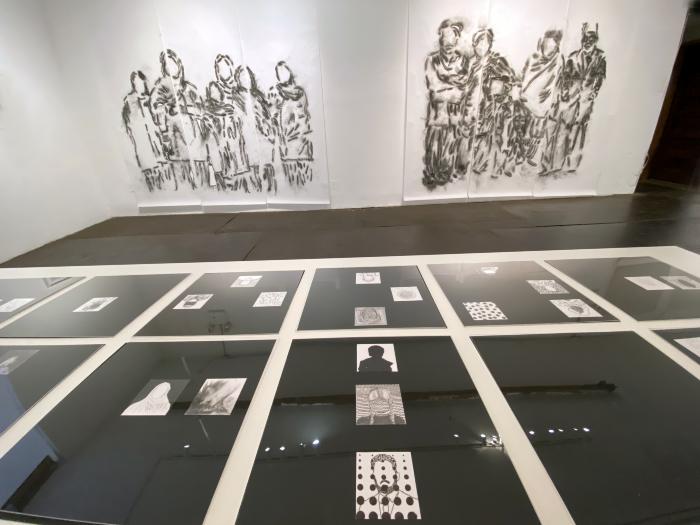 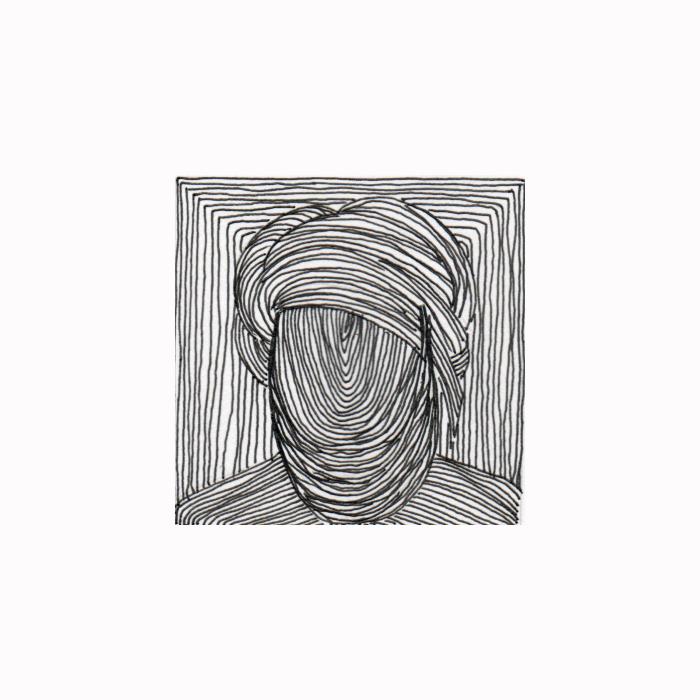 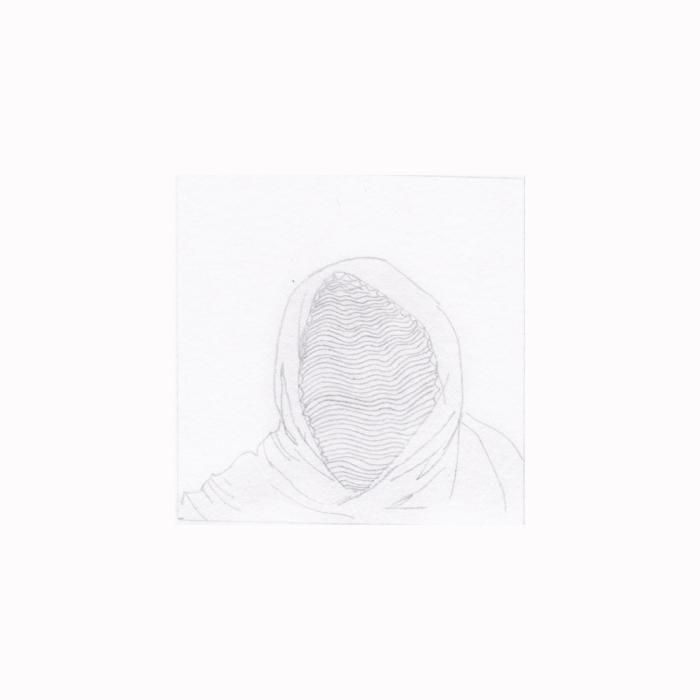 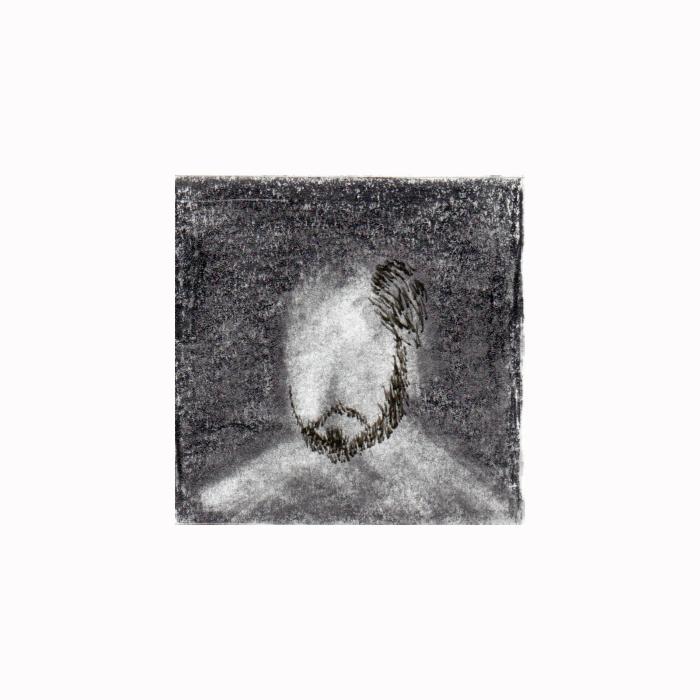 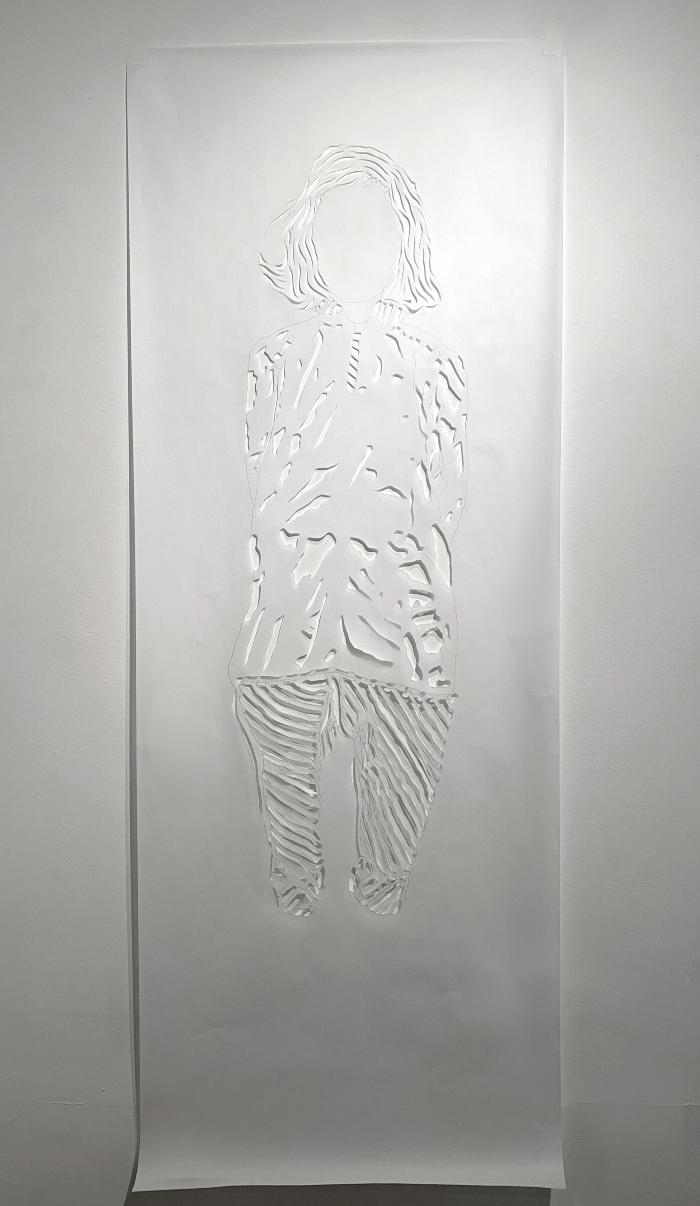 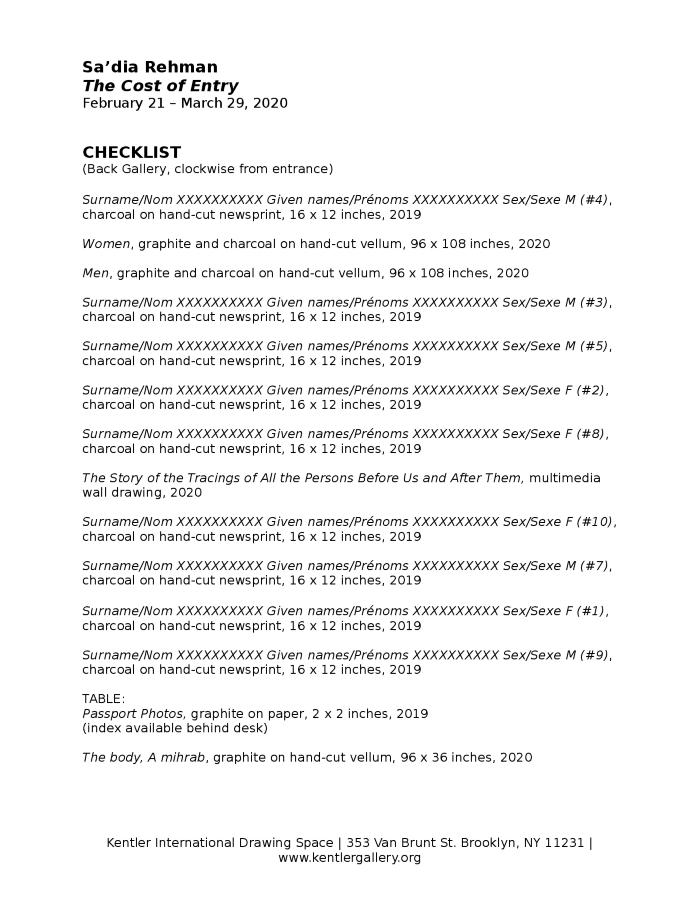 The Cost of Entry

EXHIBITION EXTENDED - NEW CLOSING DATE TBD
Due to temporary closure during the COVID-19 outbreak, Kentler is extending this exhibition. The gallery's return date and the show closing date will be announced as soon as possible. Thank you for your patience.

Sa'dia Rehman’s modes of making include hand drawing, stenciling and tracing. Her installation features tiny pen drawings on newsprint, charcoal renderings on cut vellum and a site-specific, performative wall drawing. The Cost of Entry explores the impacts of surveillance and documentation on the individual and group identity. Various depictions of faceless, posed figures reference the tightly controlled aesthetic of passport and ID photographs. The stoic Surname/Nom... “portrait” series is created using compressed charcoal pushed through hand-cut stencils. By showing the negative space, or the stencil, Rehman complicates the dualities of isolation/togetherness, abandonment/fulfillment and erasure/revelation.

Rehman’s multimedia wall drawing, generated by interactive performance on the night of February 21, features contemporary and historical surveillance-generated images traced from projection onto the gallery’s back wall. The images overlap and obscure one another to form a hectic scene that casts the viewer as both observer and perpetrator. With these silently confrontational works, Rehman reminds her audience that surveillance, tracking and denial of the “other” are active, not passive activities, and ones in which we all participate.

A brochure with an essay by Jasmine Wahi accompanies the exhibition.

The essence of Sa’dia Rehman’s work is a complex exploration of the relationship between individual memory, familial nostalgia, and the body politic. Her 2020 exhibition, The Cost of Entry, creates a dual exploration of personal and collective history within the context of the surveillance state. The works ask us to reflect on how that benefits or harms each of us. Through life-size stencil drawings on vellum, tiny works on newsprint, and performance, Sa’dia is archiving in real time, preserving the rapidly shifting politic of existing. The Cost of Entry plays with the contrast of intimacy and interiority against documentation and control. The large works on vellum, Women (2020), Men (2020) and The body, A mihrab (2020) all consider the self-reflective and intimate image.

The Cutouts
Sa’dia has always incorporated elements such as photographs and documents from her own family archive into her work. In the large drawings on vellum, she portrays her family in an intimate tableau, evoking family photographs. The figures are created by delicate and precise cutouts from vellum, which are then rubbed and powered with charcoal. The positioning of the figures suggests a formal family portrait. In both Women (2020) and Men (2020), she has produced full-body images, their blank faces looking directly at the viewer. The works show a palpable intimacy between subjects. These are the only works in the exhibition that express such intimacy, and show an interaction between multiple beings. The other two series, which are made on newsprint and drawing paper, show isolated bodies in sterile and stiff settings.

Surname/Nom…
In Surname/Nom… Sa’dia references other types of “official” photographs from her family archive such as those prepared for a passport, green card, visa, or driver’s license. These photographs are taken in private based on parameters prescribed by the state. The photos strip away the subjects’ individuality and turn them into a set of visual criteria. The resultant documentation is used by the state to identify and track individuals. The Surname/Nom… drawings are blown-up passport photos, and reflect the rigid guidelines for “useable” material. Each subject is positioned within the frame to include the top of their head to just below the collarbone. They “look” straight ahead (these works have blank visages), literally expressionless.

None of Sa’dia’s subjects have faces. The blankness holds a multitude of meanings. The anonymity could be read as protection, privacy, and self-preservation; and/or it could signify erasure within a country that chooses to see brown people as archetypes instead of individuals.

In Surname/Nom…, the flattening of individuality is emphasized through the contrast of cutouts and non-cutouts. For example, in #1, the subject’s “incorrect” (nonwhite) background and the cut folds of her hijab starkly contrast with the pristine white of her cut out face. In #2, the brownness of the subject’s skin is in focus foiled by her cut out white, middle-parted, hair. In #3, the topi suggests Muslim identity. The Passport Photos work within the same compositional structure as Surname/ Nom…, but create a new link between the personal/intimate and the public/sterile ID photograph.

Passport Photos
At two inches square--the scale of actual passport photos--Passport Photos (PP) are the smallest works in The Cost of Entry. They are intimate: each drawing forces the viewer to physically contend with it. These works subvert the control of government documents because they demand that the viewer engage. In a border setting, the passport viewer has theoretical power over the passport holder--they are the barrier to entry. But these small drawings have the potential to hold the viewer captive.

These drawings also subvert the function of the passport photo by incorporating individualizing clues about the subjects. The subjects in PP have very specific idiosyncrasies and personalities. Their faces are still hidden, but with symbols or gestures that speak to a specificity. PP4 is a specific person--his beard, suit, fluffy side parted hair, all imply individuality--a personality. PP2 ventures into the surreal, with the merging of the winding tendrils of the garments and the background.

To add to the subversive nature of the works, they include “antisurveillance” elements. The obfuscation of each face is reminiscent of techniques that people use to avoid or confuse surveillance technology. It is a deliberate masking or camouflage; it is a means of taking back power. PP3 face is squiggled out, in a manner similar to that of PP2, to avoid detection.

Passport Photos is Sa’dia’s small but mighty reclamation of individuality and autonomy in the conversation around us versus them. The final (or perhaps first) element of the exhibition, The Story of the Tracings of All the Persons Before Us and After Them, reiterates this dichotomy between individual and state; surveillance and freedom; PoC and control; immigrant and empire.

The images that Sa’dia selects are all from specific points of view, which speaks to the larger idea of subjectivity and constructivist history or narrative. In the case of The Cost of Entry, the artist selected images associated with state sanctioned surveillance. These include material from drones; historical paintings, documents, and photographs of indigenous people that were used as a way to track and study them; security camera footage, CCTV footage, in-home camera footage, and more. The performance reflects upon the long legacy of surveillance. Tracking and tracing dates back to the early colonial era. It is not only technology or 9/11 or Donald Trump that spawned the practice of regulating movement and growth, it is also a practice rooted in the earliest history of settlement. The Story of the Tracings of All the Persons Before Us and After Them reminds us that we are all complicit in these global systems.  In fact, this reminder is the resounding take away from The Cost of Entry.

Conclusion
The Cost of Entry is an exhibition about multicentric points of view. It is an exhibition about the conflict between subjectivity/individuality and objectivity/control. It is an exhibition that exposes a political phenomenon through the lens of the personal. Sa’dia’s  brilliant maneuver is to create artwork that pushes the viewer to be both us and them. She challenges us to try and see us the way they see us, and for us to see them as they see themselves. She reminds us that this type of oppression--of black people and brown people, of people whom we determine are ‘them’ by how we perceive them by their visual indicators--is not new. She reminds us that there is a cost of entry for all of us.

----Jasmine Wahi is the Founder and Director of Project for Empty Space, a nonprofit arts organization in Newark, New Jersey.