Focus on the Flatfiles: alternative solutions 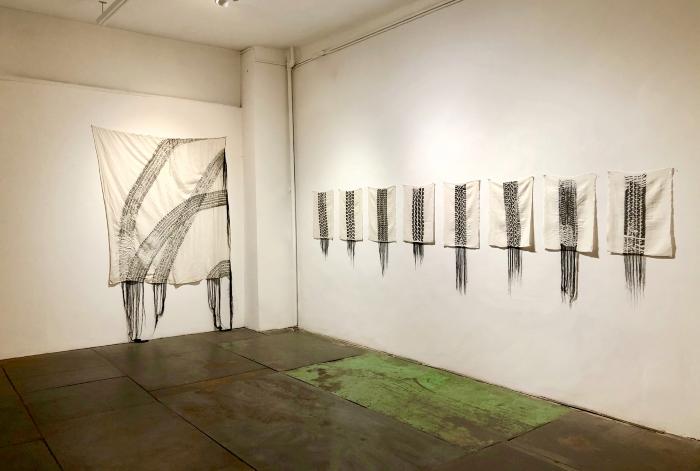 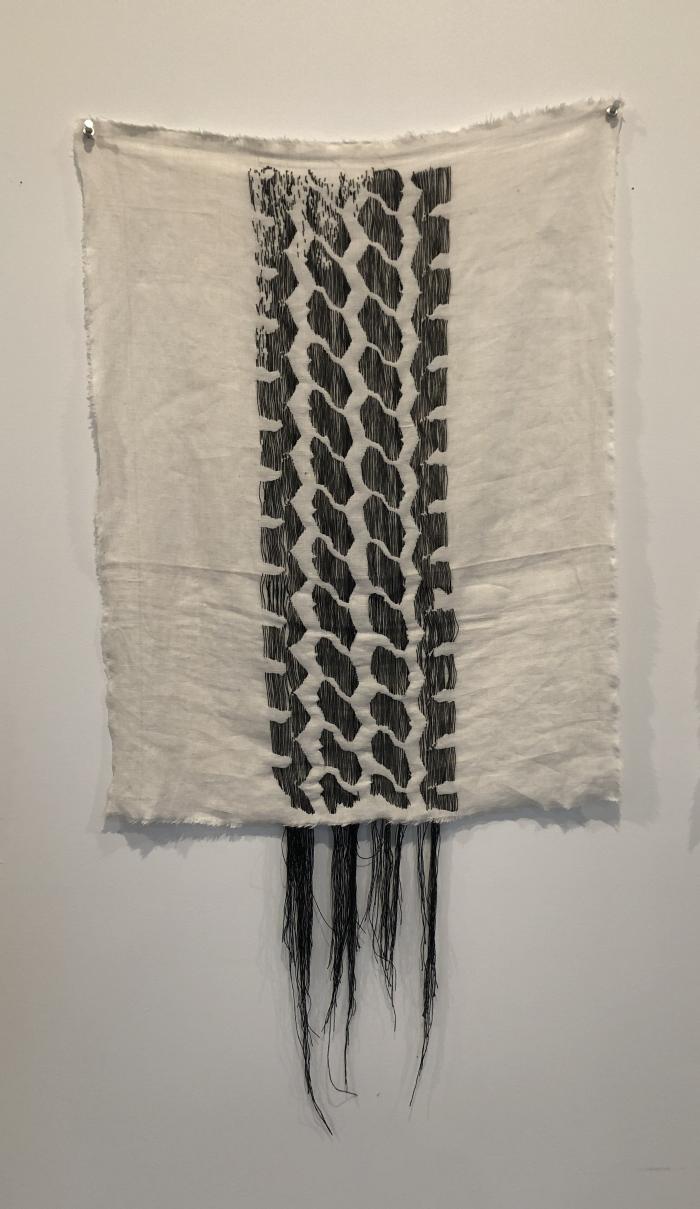 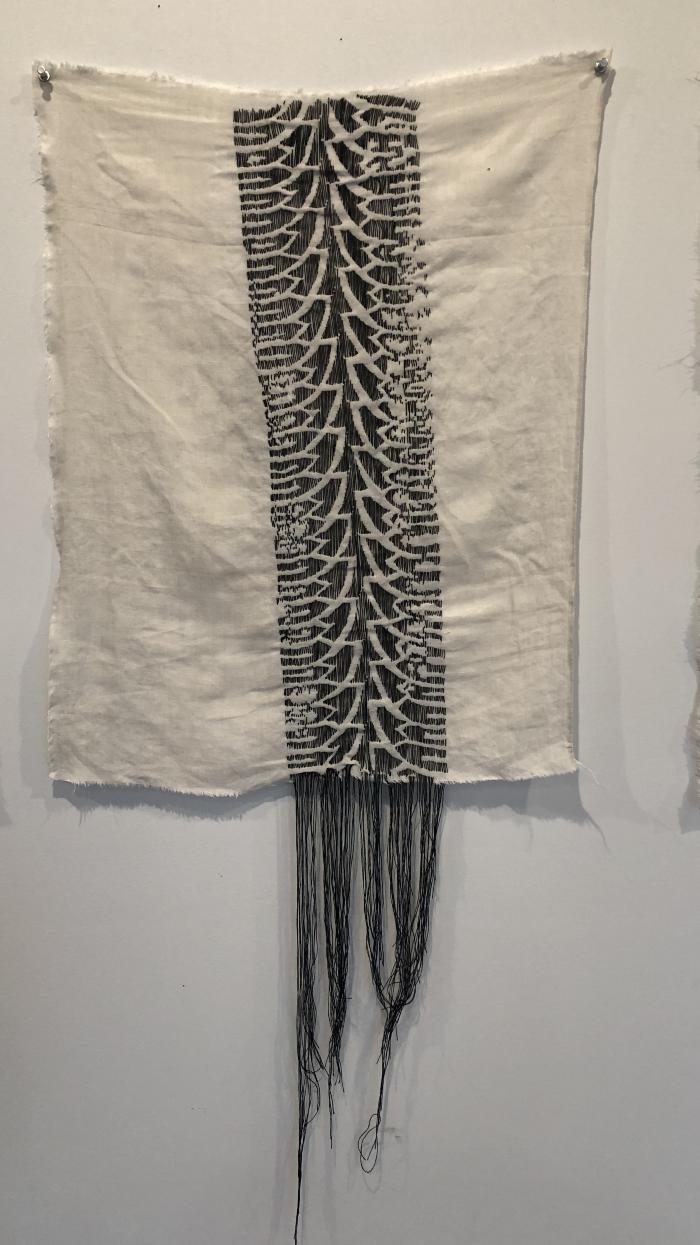 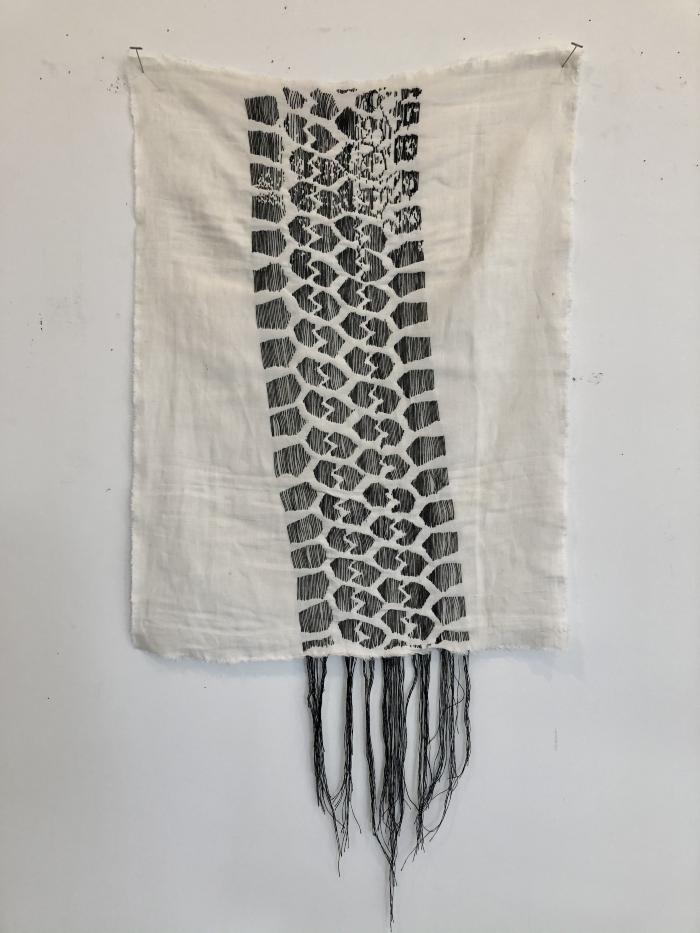 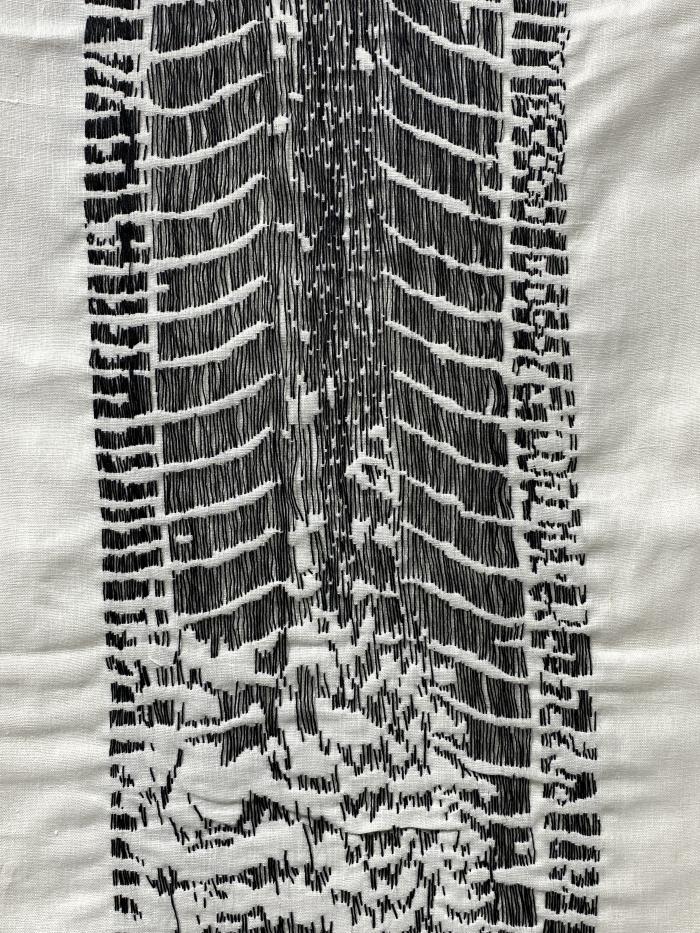 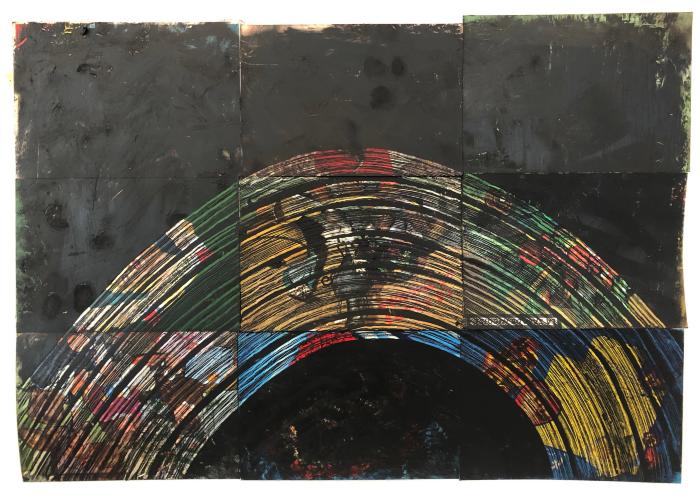 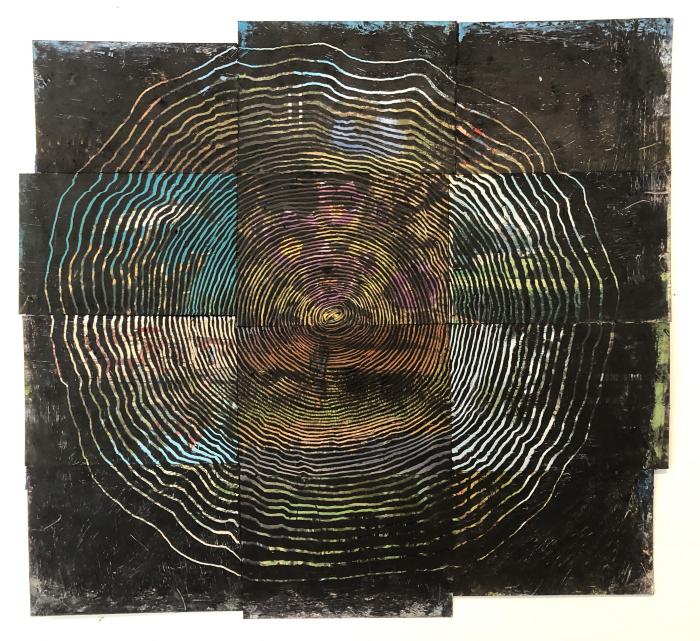 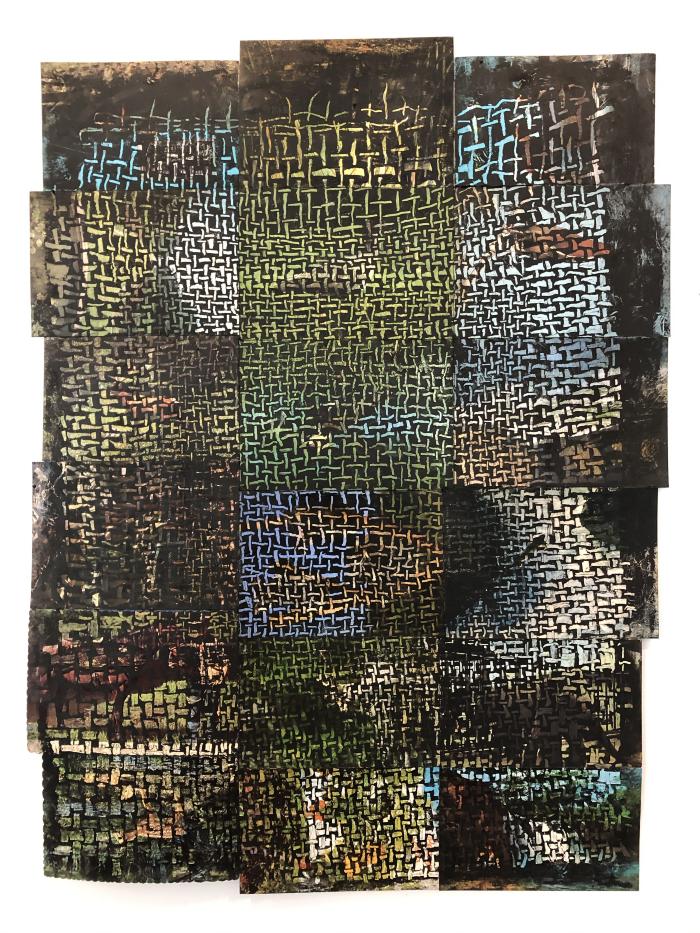 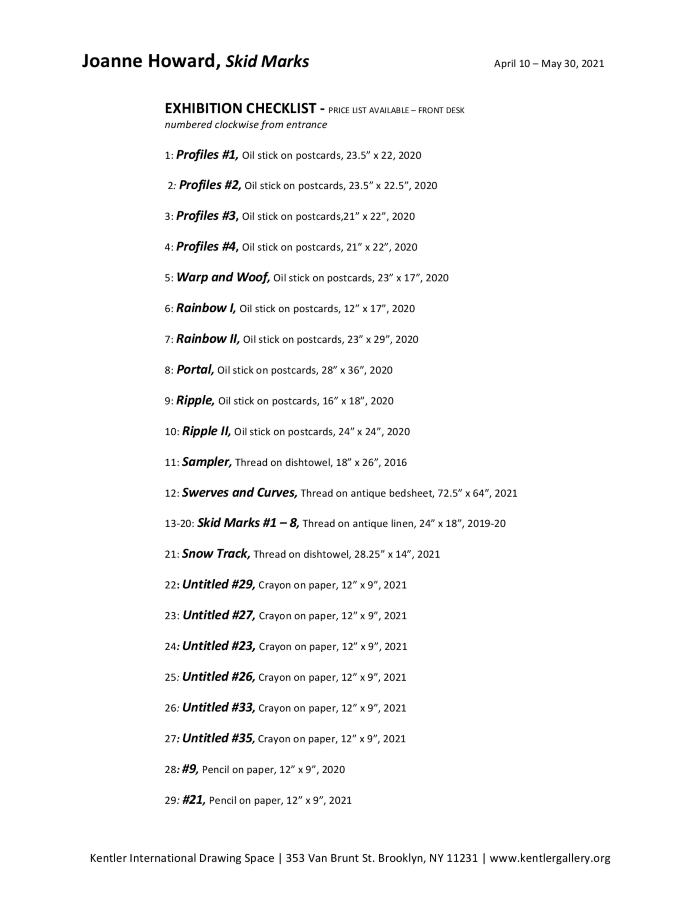 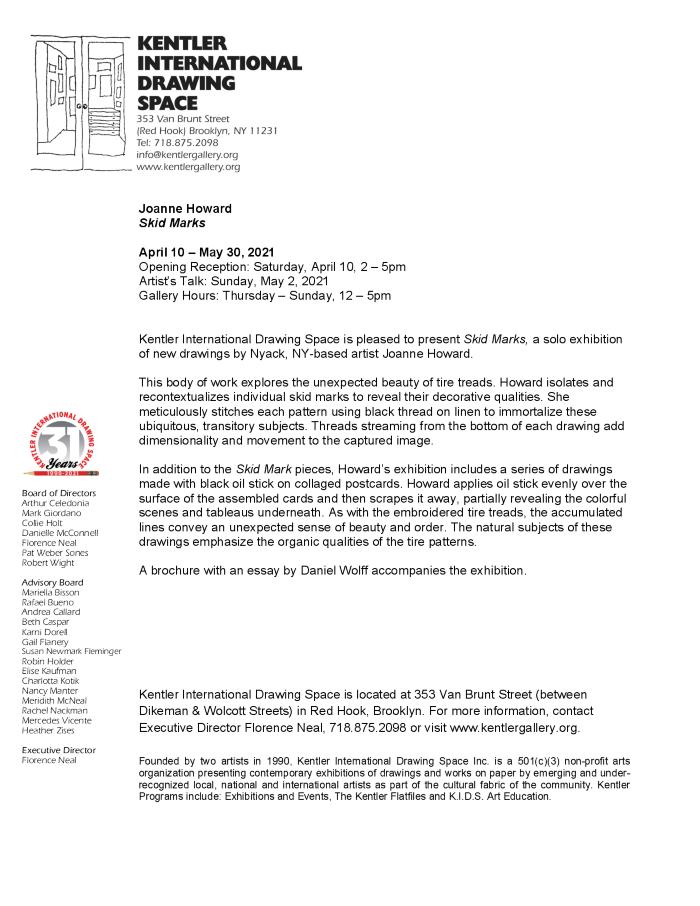 Where does this start? Someone turns their pick-up around in a parking lot. Or a Toyota cuts across fresh snow. Or a motorcycle skids to a stop on a rainy street. We make these marks and then pass on. They’re industrial, mass-produced, and there are many thousands of them, but each is different. To isolate one is to imply the others: the stretches of road and ramp that crisscross the country, all marked up and left behind.

If you meticulously trace these marks with a needle and black thread, reproducing them on white linen, you’re doing them a startling honor. Like an early American sampler or a funeral shroud. Stitch by stitch, you place them in another world, a softer and more organic one. The tire treads in their “natural” symmetry begin to resemble bark or vine or animal tracks. They become ghosts of the original marks, remains carefully preserved.

That exacting, precise honoring amounts to a revelation. Its meaning changes with perspective. You think you’re looking down at a mark on a road until your eyes reach the excess black thread dangling at the edge of the fabric. Then you realize that gravity’s at work, that the mark has been lifted off the street and hung on a wall. It is — you are — transported. Now you can read from top to bottom, from the seemingly arbitrary start of the sewn tread to where it streams off at the bottom like so much dark water. Or you can read side-to-side, so that the white fabric is interrupted by some black event, the white forced into wedges and islands until the event ends, and there’s blank peace once more.

The treads are a pattern, and a pattern — on a tire or in nature — is a message, a message we barely understand. Tape a bunch of postcards together so they form a field; completely cover them with the deep black of an oil stick; then scrape off a pattern using a palette knife. The pattern reveals the bright colors of the hidden cards but, again, barely. A scraped rainbow uncovers parts of a smiling woman, a couple at dinner, a naked body. There’s some sort of lively, remembered history buried beneath the surface, which the patterns — rainbow, cross-hatched circle, human profile — can’t quite bring back. The scraping off, labored and full of human error, becomes a kind of inadequate struggle to get over or through sadness.

“Nature is but another name for health,” Thoreau says. Its patterns are miracles of reproduction and growth. But to turn from tires and postcards and try to capture nature’s shapes is to overwhelm a blank page with the black lead of a pencil. It makes visible the effort to see and leaves the subjects — sunflowers at the end of the season, trailing vines, knots in wood — as emerging shapes in an almost overwhelming darkness. If the alternating pattern of sycamore bark is Nature, is Health, it seems just beyond our reach: thousands of marks we overlook (again) and leave behind.

It’s a relief, finally, when color gets added to the pencil drawings. Like light being let in, like a birth. The many shades of green grass, the mosaic inside tree bark, the blue jig-saw puzzle of melting snow are announcements. It makes you want to go back and notice how all these marks have the ability to grow and delight. The care taken in the drawing and the scraping and the stitching — the struggle to follow the patterns, to see — swerves into a kind of wild abandon. You might even call it hope.

Daniel Wolff is a writer who lives in Nyack, New York