exhibition
Robert Aitchison, State of Emergency: Portraits from the Pandemic

Focus on the Flatfiles: Portraits
VIEW FILES: Portraits from the Pandemic 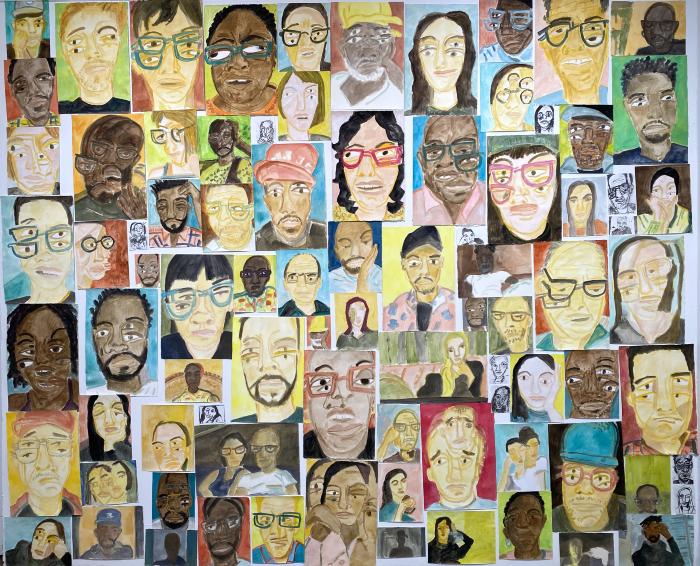 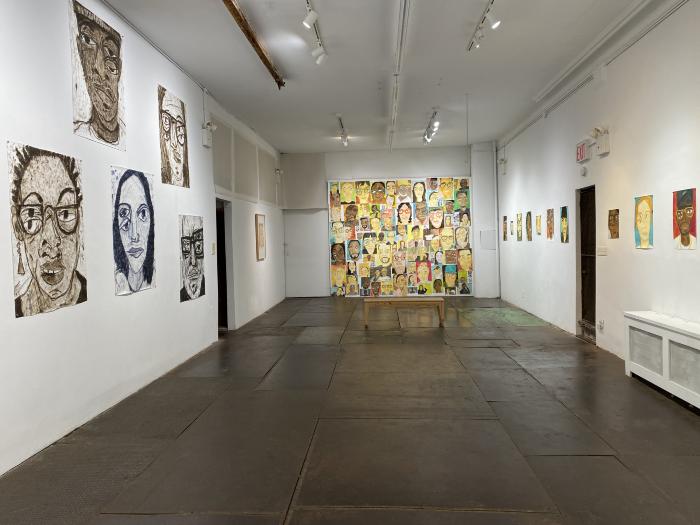 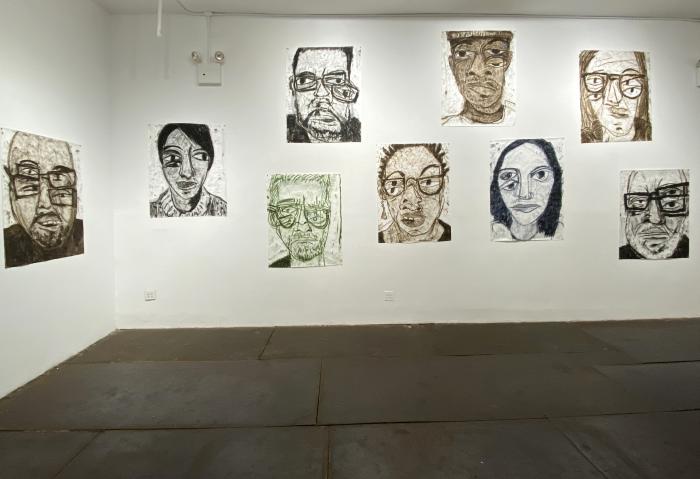 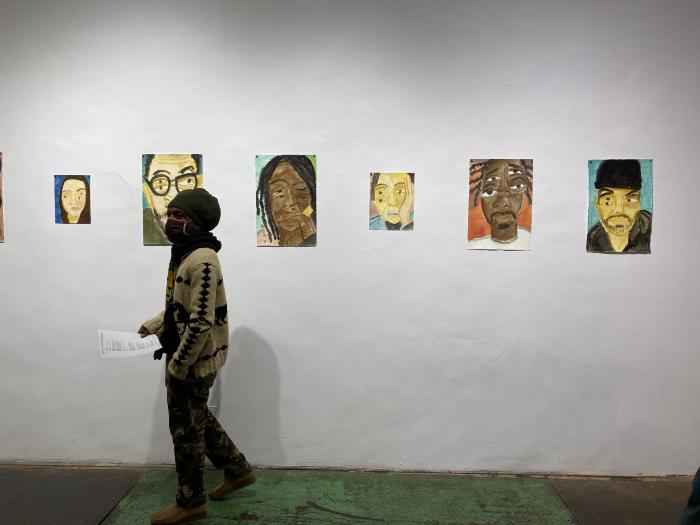 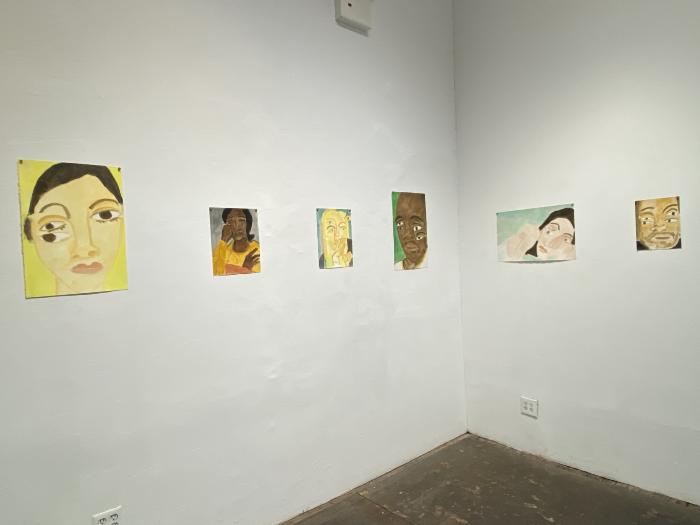 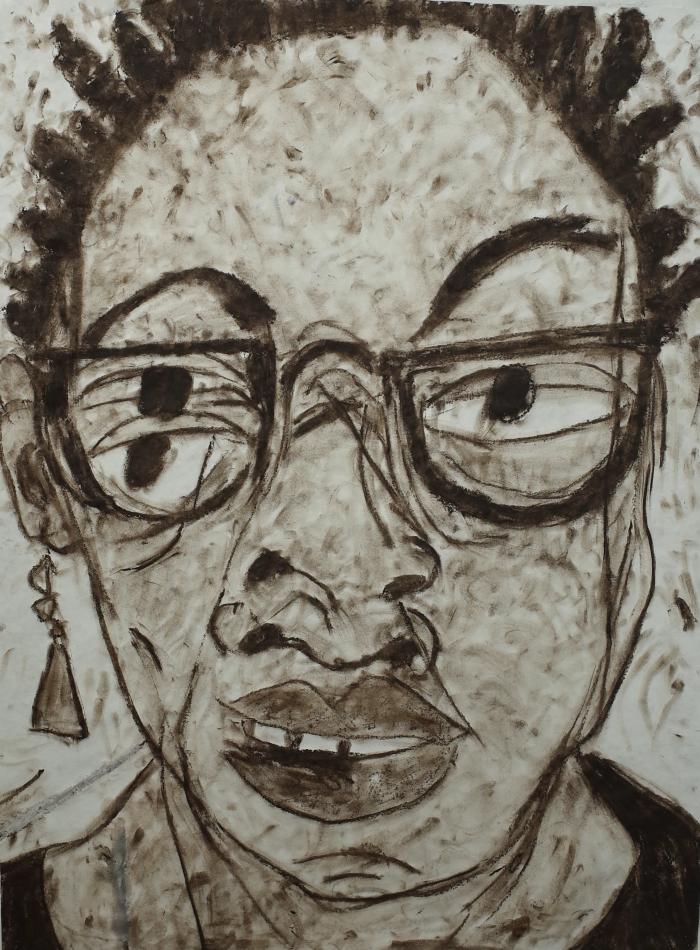 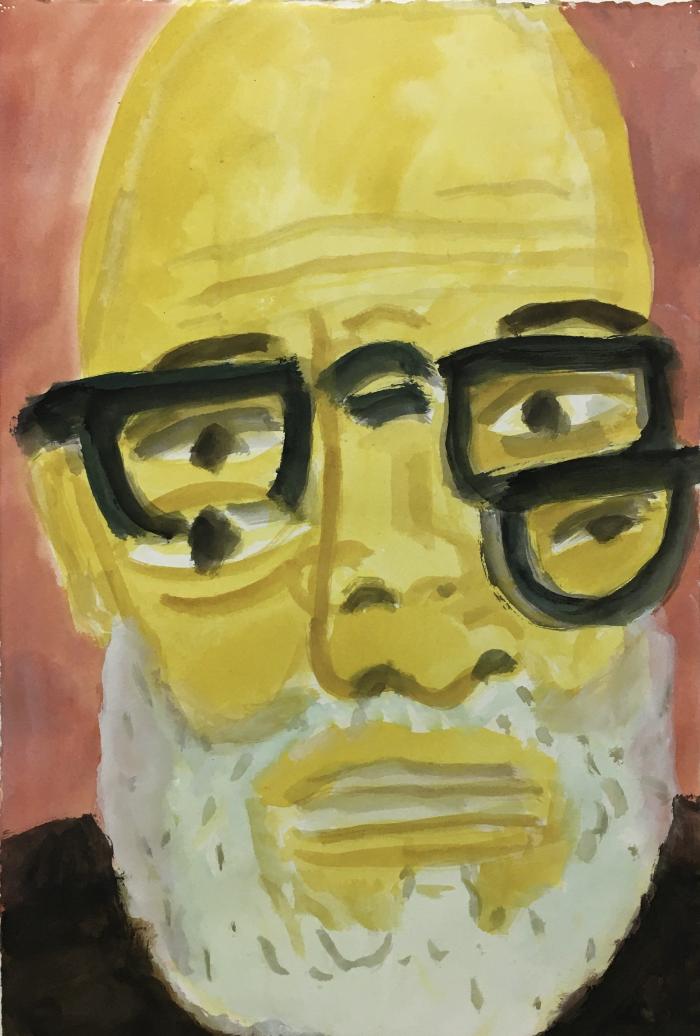 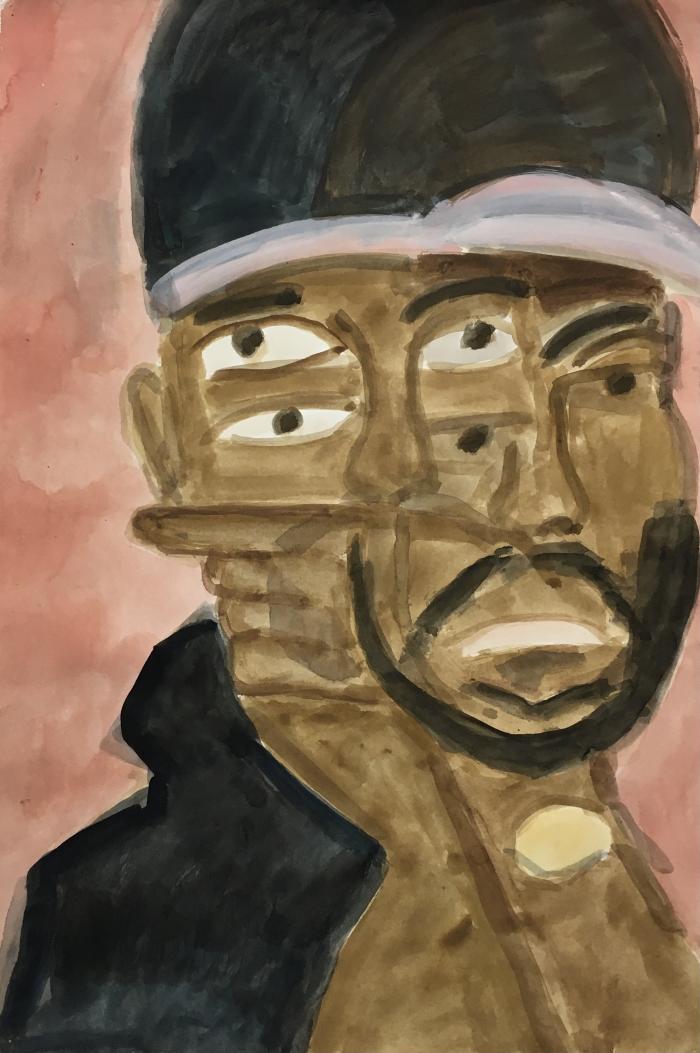 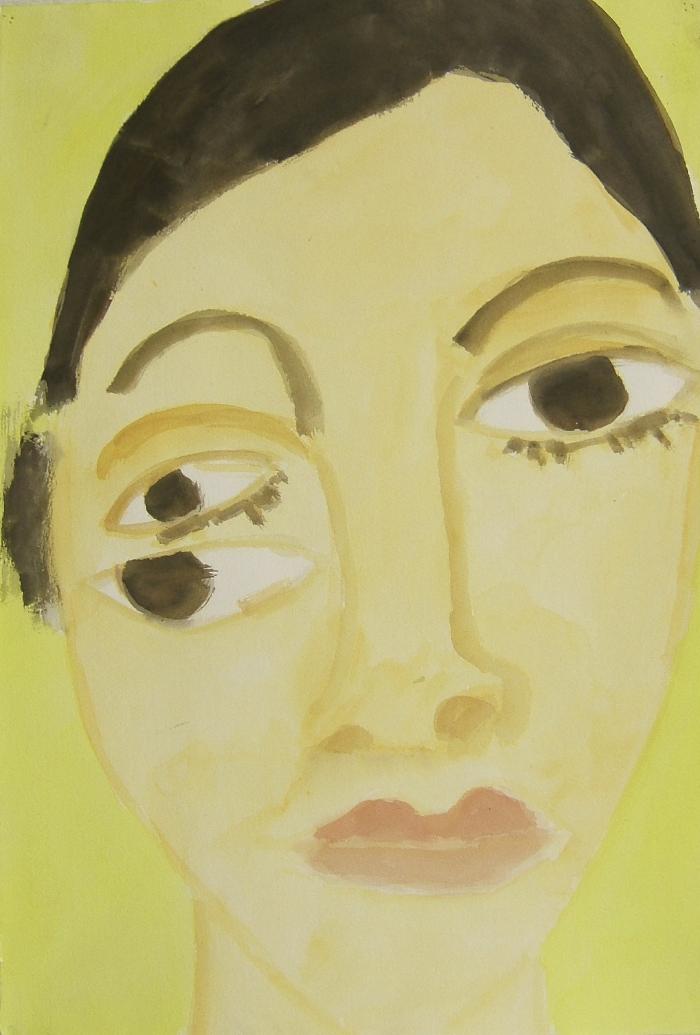 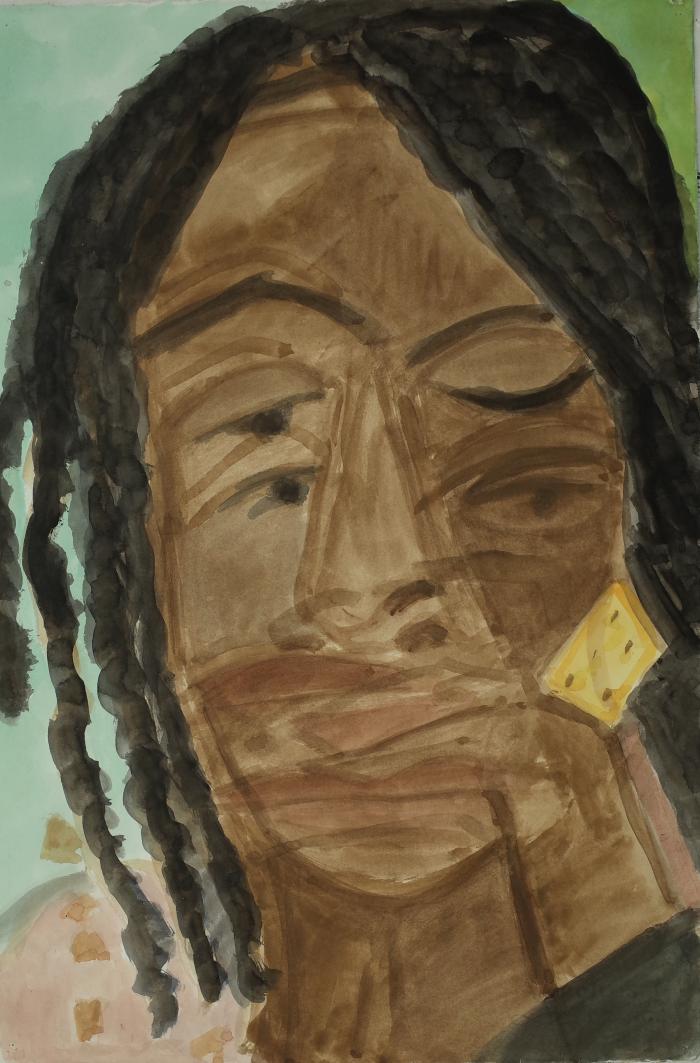 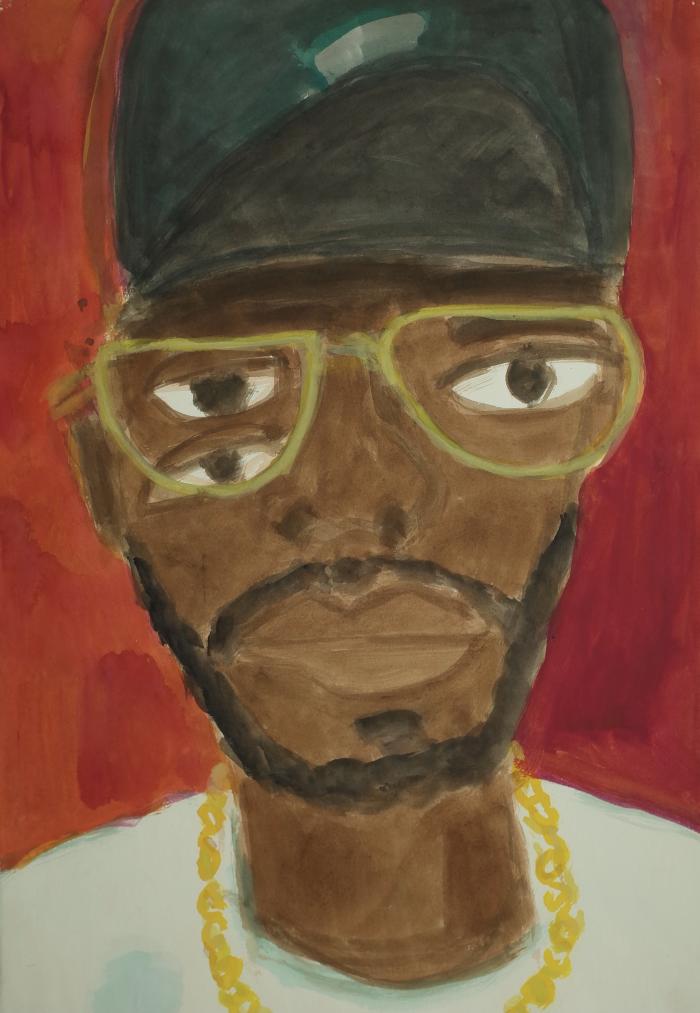 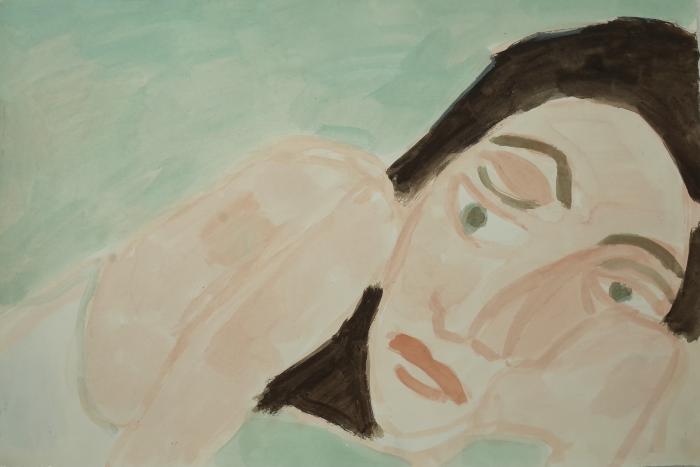 ROBERT AITCHISON, State of Emergency: Portraits from the Pandemic

A brochure with an essay by Michael Friedrich accompanies the exhibition.

State of Emergency: Portraits from the Pandemic

When the COVID-19 pandemic struck the U.S. in March 2020, forcing much of the world into quarantine for several anxious months, many people found a lifeline through video-conferencing platforms. In those virtual spaces they held meetings for work, gatherings of family and friends, worship congregations, and support groups.

Robert Aitchison quickly found himself compelled to draw them. On view at Kentler International Drawing Space is State of Emergency: Portraits from the Pandemic, a solo exhibition that showcases Aitchison’s practice of close attention to people in these digital spaces, engaging with questions of presence and absence, contact and separation at a time when so many people were isolated. Like seeing a lover up close, the works, rendered in gouache on paper and oil stick on large polyethylene fiber sheets, are by turns meditative, mysterious, intimate, and claustrophobic. They elaborate on a singular motif, ultimately revealing new possibilities to use technology as an instrument for deeper interpersonal connection.

The works represent a departure from the artist’s previous output. Since the 1990s, Aitchison (b. 1970) has worked almost entirely as a painter. Originally from Spring, Texas, he received his BFA from the University of Texas at Austin, and moved to Brooklyn, New York, in 1998. Today, he divides his time between New York City and La Paz, Bolivia, where he runs an art-education program for disadvantaged youth. His pre-pandemic work, which has been shown widely in the U.S. and abroad, including in several group exhibitions at Kentler, concentrates on examining and abstracting scenery—like landscapes, living rooms, and cafes—that we often take for granted; it seldom incorporates the human figure.

But a linkage exists between the old work and the new. Aitchison insists that his pandemic drawings are not portraits in the traditional sense but “inner landscapes” of people in his community. His attention to these figures’ interior lives is a welcome shift from the numbness of our digital age. Anyone who has spent much time on platforms like Zoom, FaceTime, or WhatsApp knows the de-individuation that comes along with the experience of seeing many faces virtually, whether one at a time or all at once. The details of Aitchison’s portraits—the facial features, expressions, and personal effects—force the viewer to slow down and examine each one anew. In Untitled (Princess), a full-color work in gouache, the subject gazes away from her camera, either downcast or unsure, her hair slightly disheveled behind an ear. Untitled (Reading Glasses), by contrast, finds a figure with a steadfast, focused gaze, adorned with gold glasses and necklace—a touch of flair for an appearance on-screen. The drawings are rendered in a kind of indeterminate space, devoid of background scenery, revealing emotional states that one might otherwise neglect to note.

The portraits also call attention, however, to the barriers our technologies place in the way of intimacy and understanding. Doubled and dislocated eyes feature prominently, disorienting the viewer. The technique is nearly cubist, although Aitchison’s project is, of course, different from that of Pablo Picasso or Georges Braque. In the drawings that use this effect most intensely—like Untitled (Millionaire) or Untitled (Supervisor)—eyes, eyeglasses, and the noses they are perched on seem to vibrate on the page. Similar to the cubists, the artist is representing multiple viewpoints at once, but in this case the shimmering, cartoonish quality of motion results from the interference of a screen. It also renders the jarring experience of the pandemic, which was “like being slapped upside the head,” Aitchison says. Other portraits, particularly the monochrome works on fiber sheets, evoke carved ceremonial masks, concealing as much emotion as they reveal. Thus, Aitchison’s subjects remain a touch demure, unknowable, even archetypal, frustrating the artist’s careful scrutiny.

A number of works make reference to compositions from the art-historical canon, drawing an explicit link between the poses captured in person during a pre-virtual age and those captured remotely today. Untitled (Recline) depicts a woman in bed, chin in hand, her eyes bleary and preoccupied, resting against (or, if the color match is to be believed, nearly becoming) her pillow. It’s a nod to the reclining female subjects depicted in portraits like Francisco de Goya’s The Clothed Maja (1805). In Untitled (Waiting), a woman presses her cheek against her fist, her eyes closed in patient forbearance. The pose can only recall the many chin-holding drinkers killing time in pubs throughout impressionist and modernist portraiture. Aitchison wryly transforms these familiar postures to suggest the more solitary and self-conscious experiences of the pandemic era: waiting, watching, being watched, often distracted by other thoughts.

In our technologically mediated world, one of our most important tasks is to choose carefully what we devote our attention to. Jenny Odell, in her book How to Do Nothing: Resisting the Attention Economy, writes that paying close attention can constitute a radical act. “Patterns of attention—what we choose to notice and what we do not—are how we render reality for ourselves,” Odell writes, “and thus have a direct bearing on what we feel is possible at any given time.”

But how to accomplish that from within technology itself, especially during a quarantine when virtual platforms were our sole means to forge and maintain connections with others? Aitchison began with a profoundly analog method of engaging with digital spaces. He created small charcoal drawings of one-inch by two-inch rectangles that were the only place to see his friends unmasked. He expanded on those studies to produce hundreds more drawings, selections of which have been shown in group exhibitions across New York City during the course of the pandemic. He has continued this pattern of attention, even though, as he says, he “no longer lives in front of a computer all day.” Many of us, like Aitchison, have increasingly logged off—though, of course, not entirely. Human connection remains tenuous, in person and on-screen, and we still yearn for it. If we wish to create a more connected reality, we might, like Aitchison, devote our attention to the details of others, despite the barriers.

—​​Michael Friedrich is a journalist living in Brooklyn, NY. His writing has appeared in The New York Times,The Washington Post, The Nation, The New Republic, The Paris Review, The Baffler, and other publications.