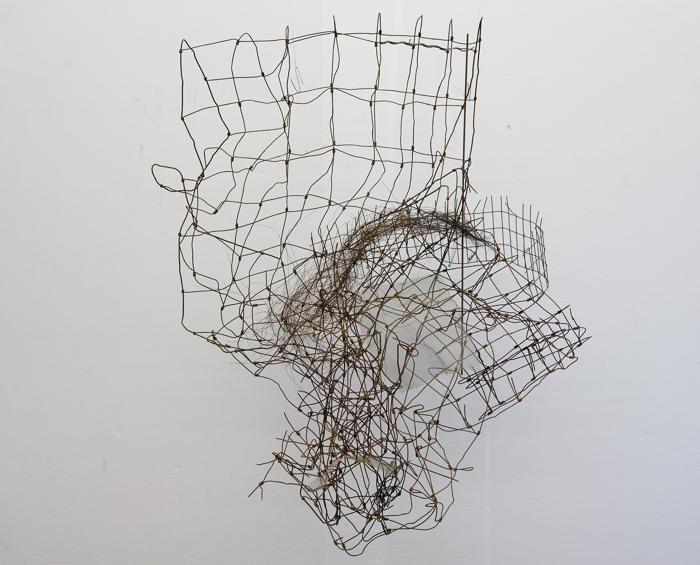 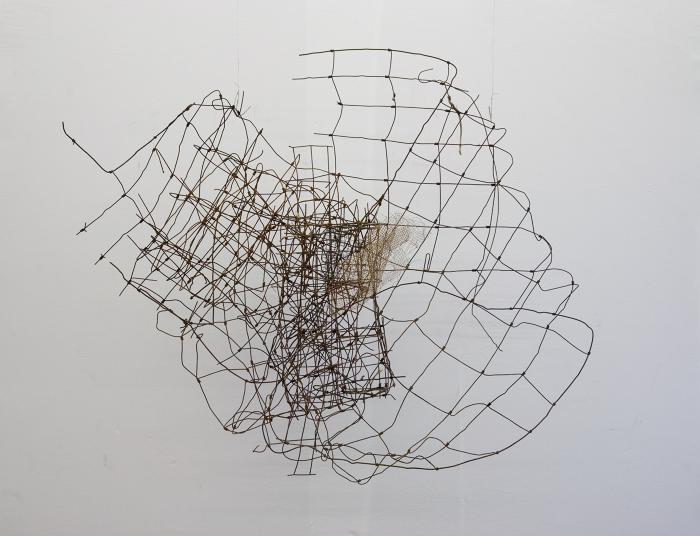 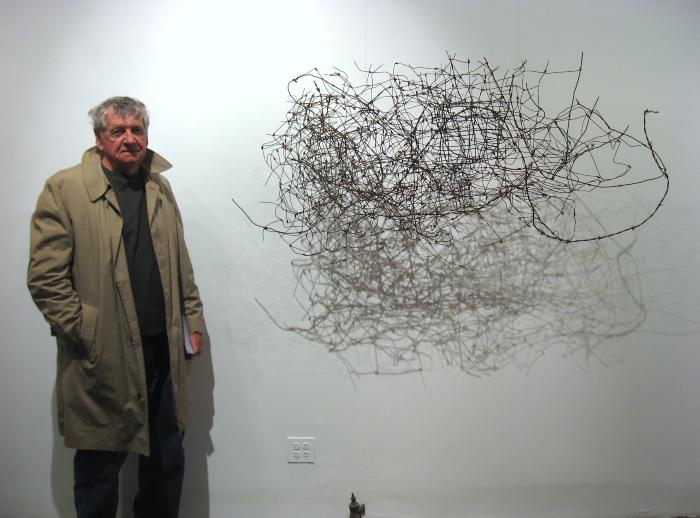 Hugh Williams with his artwork 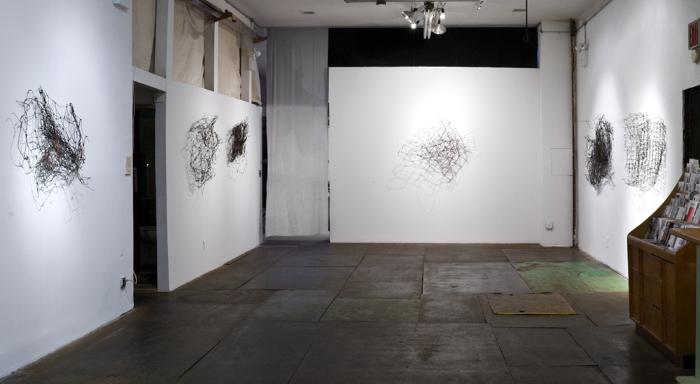 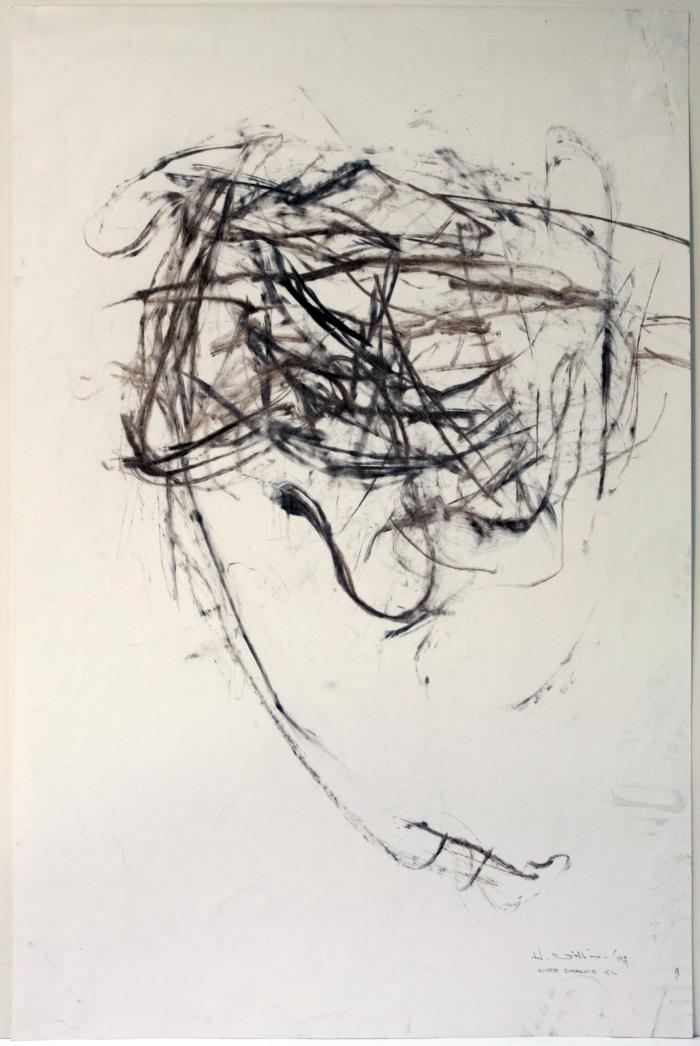 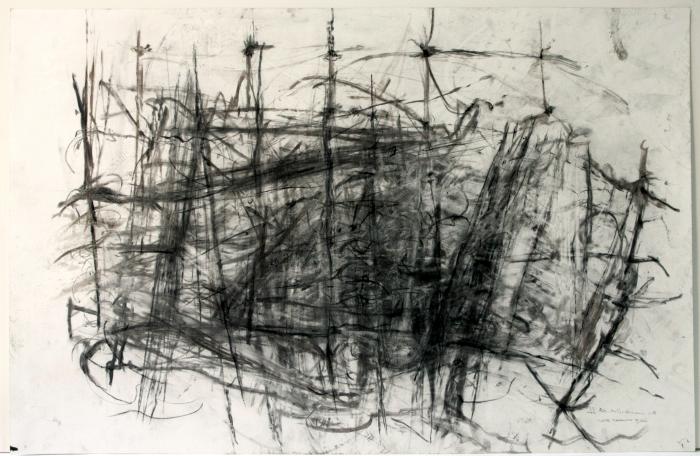 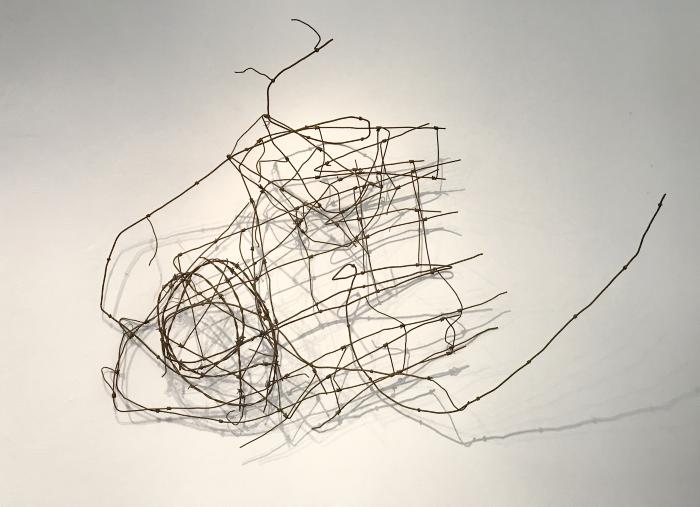 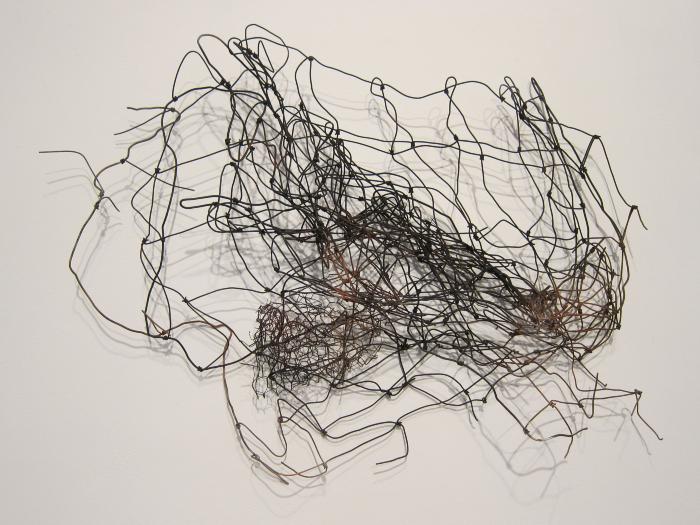 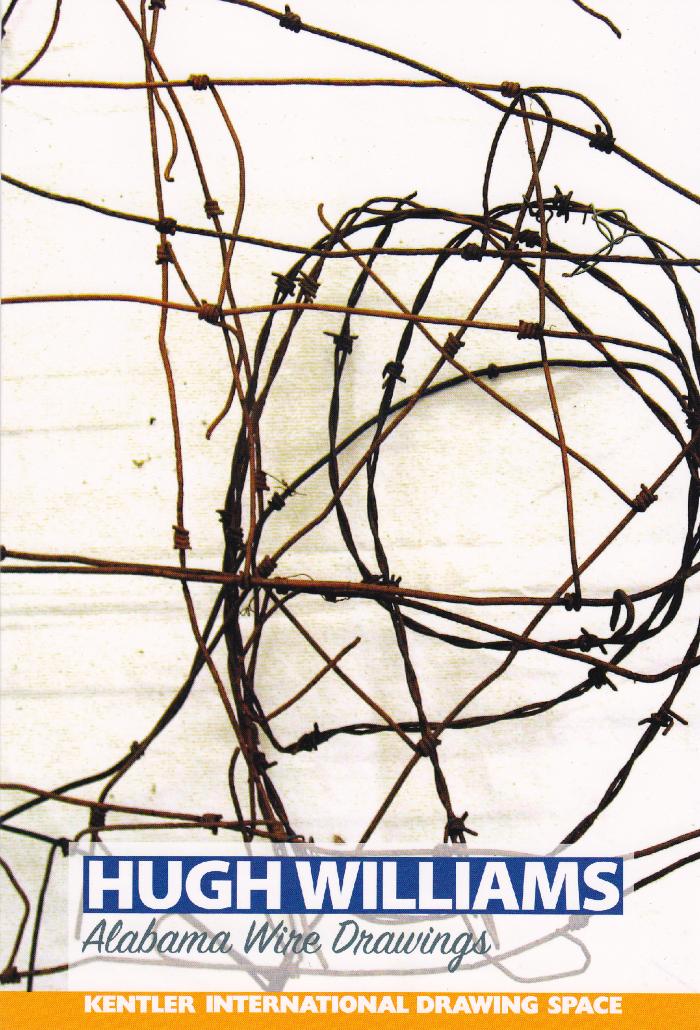 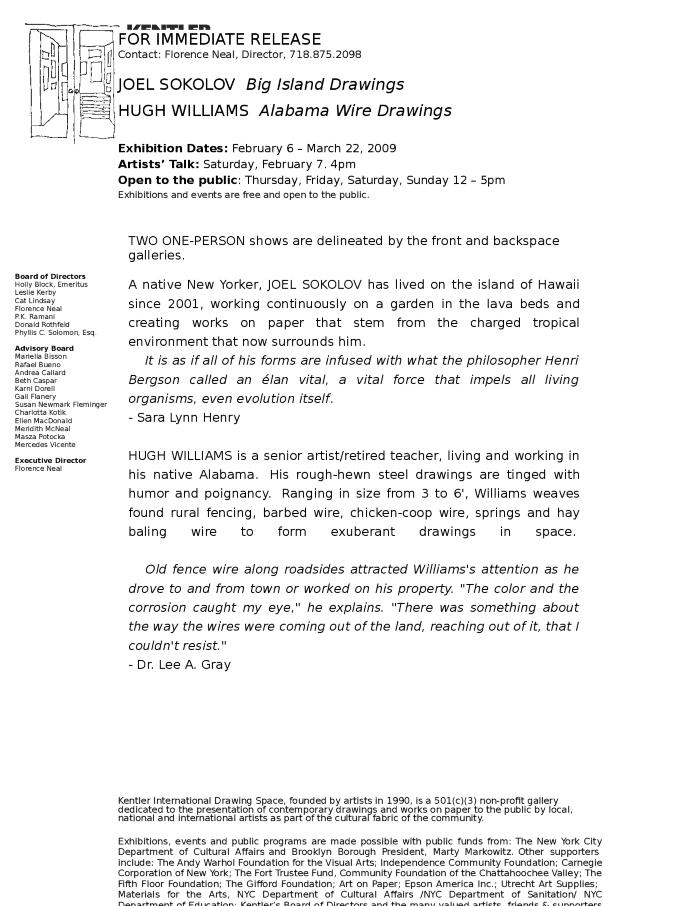 Hugh Williams is an artist, living, working and teaching in his native Alabama. His rough-hewn steel drawings are tinged with humor and poignancy. Ranging in size from 3 to 6', Williams weaves found rural fencing, barbed wire, chicken-coop wire, springs and hay baling wire to form exuberant drawings in space.

Old fence wire along roadsides attracted Williams's attention as he drove to and from town or worked on his property. "The color and the corrosion caught my eye," he explains. "There was something about the way the wires were coming out of the land, reaching out of it, that I couldn't resist." - Dr. Lee A. Gray

As an artist, Hugh O. Williams is best known for his drawings and paintings. Moving into three-dimensional space is a relatively new direction for him (though collage and assemblage have permeated his work since the early 1990s) and illustrates his wonder at the material world and his never ceasing exploration of new materials.

The work shown in this exhibition is the result of Williams’s observations of nature and his environment. It comes from an intuitive resolve to understand the nature of art, the nature of materials, indeed, nature itself. Living in a turn-of-the-century home on 50 acres of land in east central Alabama, this native son describes his world with materials found in his environment. Old fence wire along roadsides attracted Williams’s attention as he drove to and from town or worked on his property. “The color and the corrosion caught my eye,” he explains. “There was something about the way the wires were coming out of the land, reaching out of it, that I couldn’t resist.”

Williams gleans fragments of dilapidated fences that are sometimes wrapped with roots, honeysuckle vines or leaves from the invasive kudzu plant as well as wires clinging to the decayed wood of fallen posts. The kinds of wires found are a mixture of those used to pen animals: some with barbs, some with large squares made from heavy-duty single-ply steel, and some with thin strands wrapped together to form hexagonal shapes typical of chicken wire. Williams has also incorporated elements found in more contemporary sources such as computers. In one piece a clump of burned computer wire becomes the focal point. He wanted an area of thickness that could not be achieved with the larger fence material. “I had to burn [the computer wire] because it wouldn’t conform to anything,” says Williams, “But when it was burned it became like clay, totally pliable.” Though each strand of wire maintains some of the characteristics of its former purpose, it is the image of decay and transformation that most appeals to Williams.

In order to properly process these works Williams moved out of his studio and into the environment, literally to free himself from limitations imposed by constructed space. Working outdoors on his land gave him the opportunity to collaborate with the environment in a new way. Rather than burn, mold, carve, assemble or draw on paper, as he has done in past works, Williams was able to compose his wire drawings as they hung from trees or the sides of his studio, allowing him to interact with the light and shadow of natural daylight. In that milieu, the wires were visually fused with the lines of a tree – they captured the figure/ground relationships of everyday perception. The forms suggest rhythmically diaphanous universes of overlapping patterns caught in time and space, reflecting a symbiotic exchange between object and shadow. Figure and ground become one and move with the viewer’s position just as when the sky and trees reposition themselves as figure and ground simultaneously.

Despite how fluid the lines of these drawings appear, the process can be a physically arduous one. Williams, now 80, uses any number of pliers and wire cutters to manipulate the materials into manageable forms, the scale of which is determined by Williams’s own body and how well he can “wrangle” the old wires to suit his purposes. “The first piece of wire that I brought home was nearly impossible for me to work with,” said Williams. “I ended up laying it on a plywood board and running over it with my truck to get it flat enough so I could attach it to a wall and see what I actually had.” At that point, Williams began to consider the concept of drawing in three dimensions. He experimented with the wires as collages adding to and removing various objects as he does in painting. A cluster of burned computer wire becomes a mass of line and texture. In one piece, he added screening to “emphasize the qualities of a smudge left when one erases charcoal or graphite.” Williams sees removing wires as a form of erasure. “I sometimes pull out or break pieces from a section just like I would erase something in a drawing. For me, the process is the same as when I draw.” To observe Williams working in his studio is to witness the élan of a maestro conducting a symphony. His arms gesture through the air, like a conductor choreographing a musical composition, as he “marks” the surface of his drawings by scratching or circling in both grand and minute movements.

Interested in the concepts of repurposing, reforming and finding something sustainable from the materials at hand, Williams also admits to the semiotic aspect of his discoveries. Each wire is made for a different purpose, but each shares a history of having become useless. Rich with the organic character of decomposition, these new works emphasize the beauty born of time, like the wisdom that comes with age, something that grows from looking deep within, or having once served a functional purpose that is no longer appreciated. Not only does the wire show age through the process of decay but it signifies a moment in history when containing farm animals was part of any rural landscape. Rusted segments of steel fence wire and wooden posts can be found buried or half-buried in land that has been repurposed and now sprouts only condominiums or tract housing developments. The once shiny and taut metal wires used to organize and maintain the land for economic prosperity have aged and been left or pushed aside. Indeed, these remnants along roadsides are sometimes all that remain to remind us of our agrarian past.

The signification of working with these found wires pervades Williams’s thoughts when he speaks of his work. Having grown up on the land where he now resides, he has witnessed the evolution from a rural and agrarian landscape to an ever encroaching urban topography. It is metaphorical, admits Williams, of our own aging process yet there is something fully beautiful and positive about repurposing these wires into something wondrous, contemplative and useful again. In the end, maybe we can view these works as metaphors for rebirth, rejuvenation or something as simple as sustainability. / Excerpts from personal phone interview on Oct. 18, 2008.

- Dr. Lee A. Gray is Curator of Exhibitions and Collections at the Paul and Lulu Hilliard University Art Museum at the University of Louisiana-Lafayette, LA. (Back gallery space)