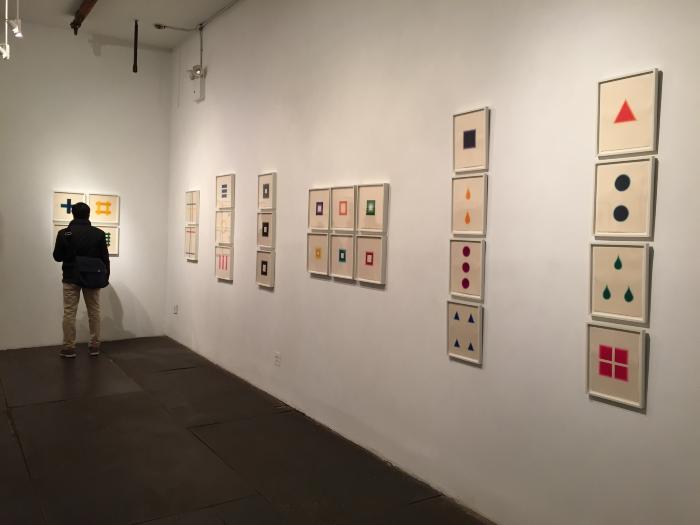 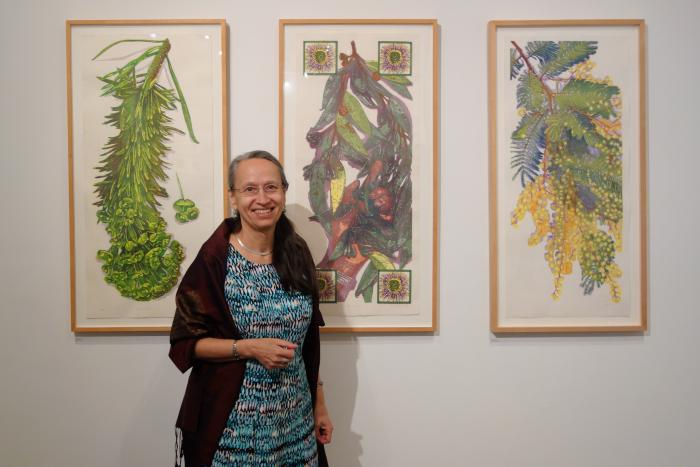 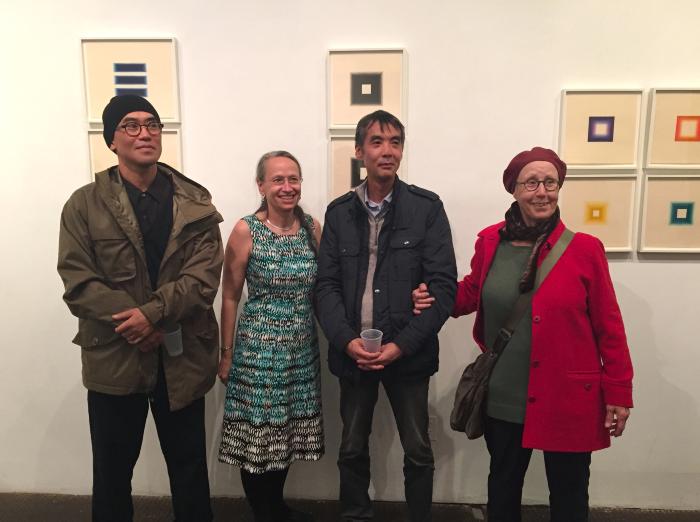 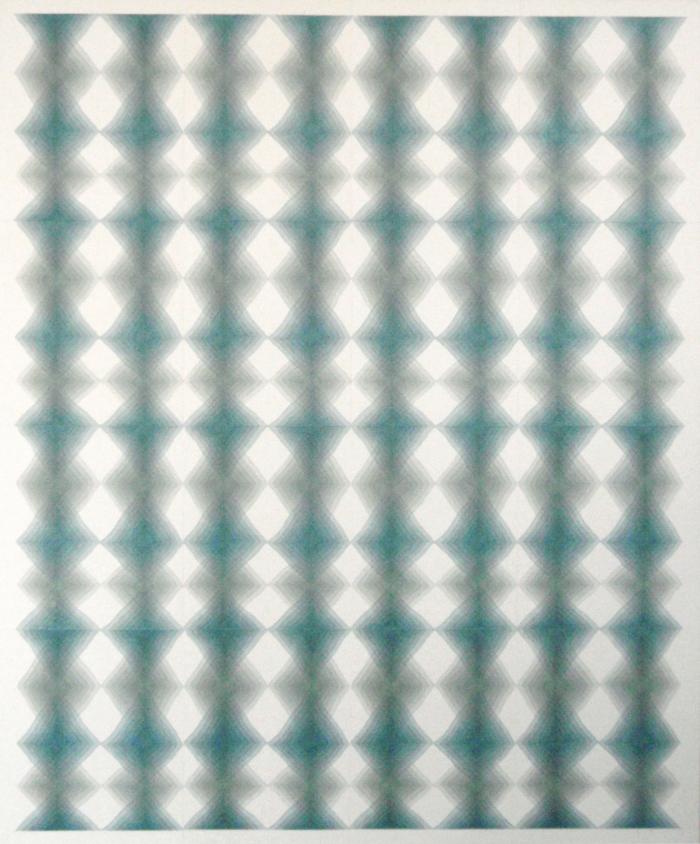 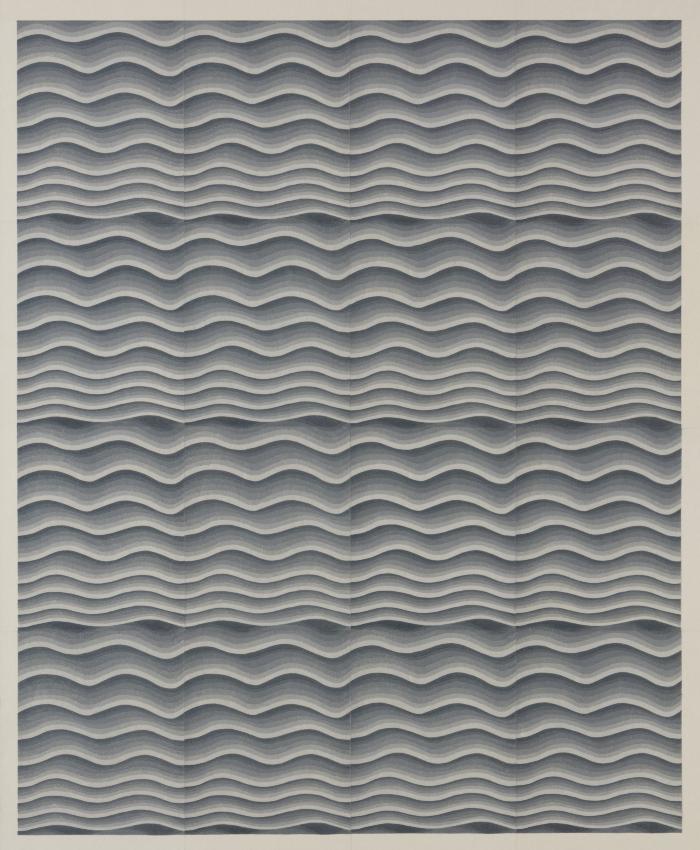 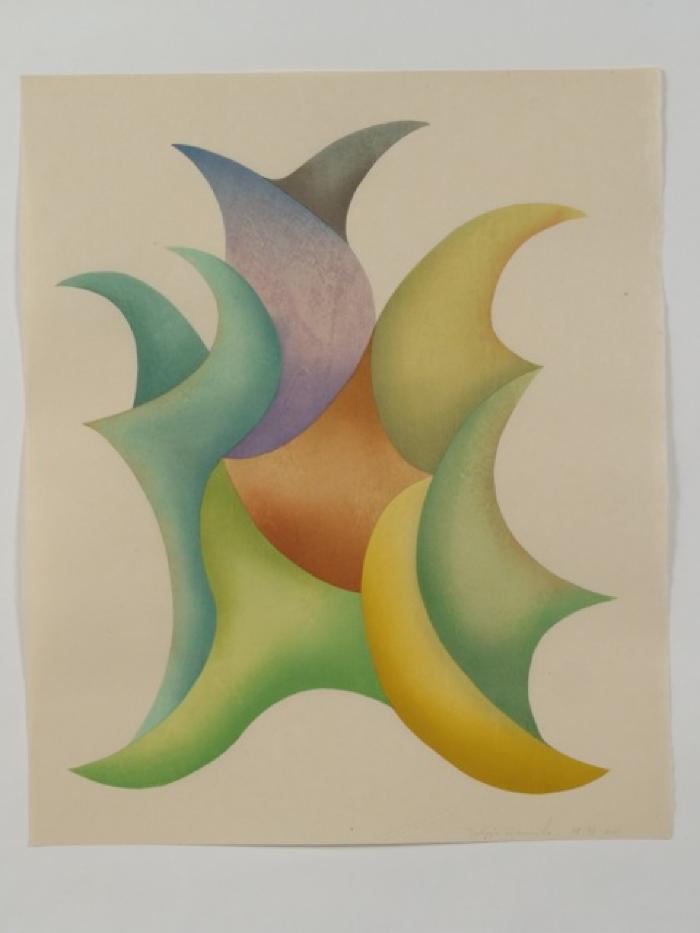 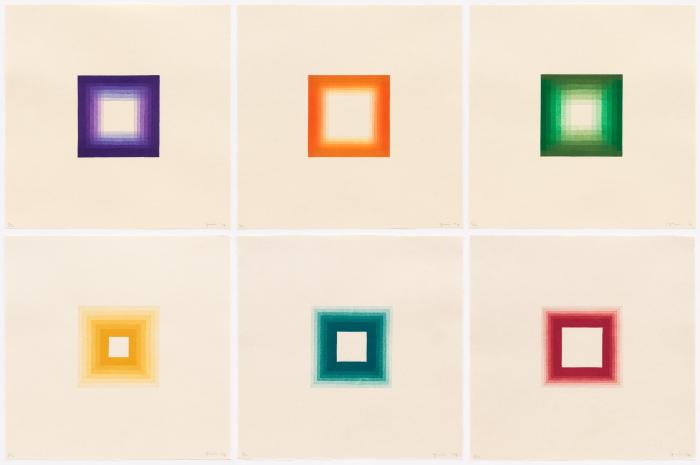 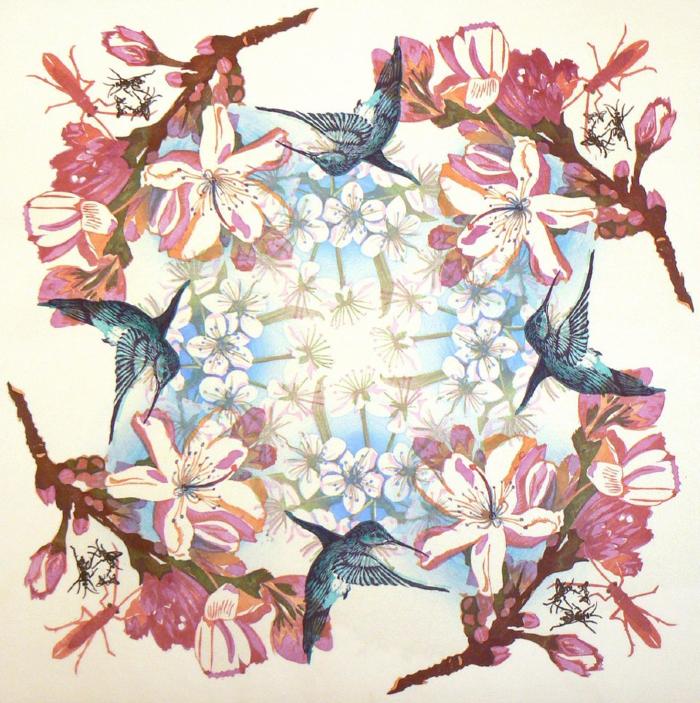 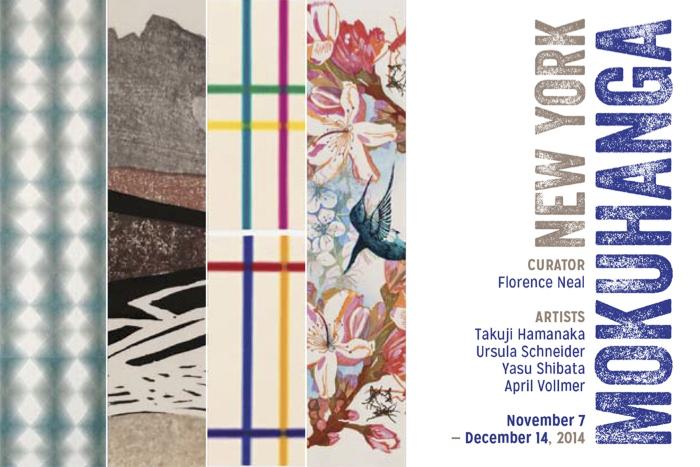 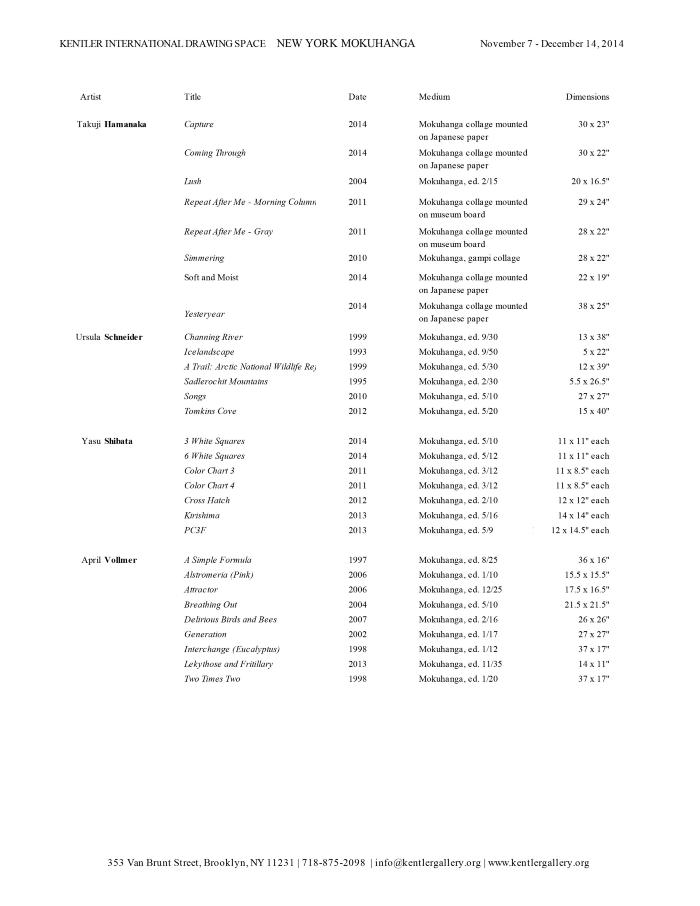 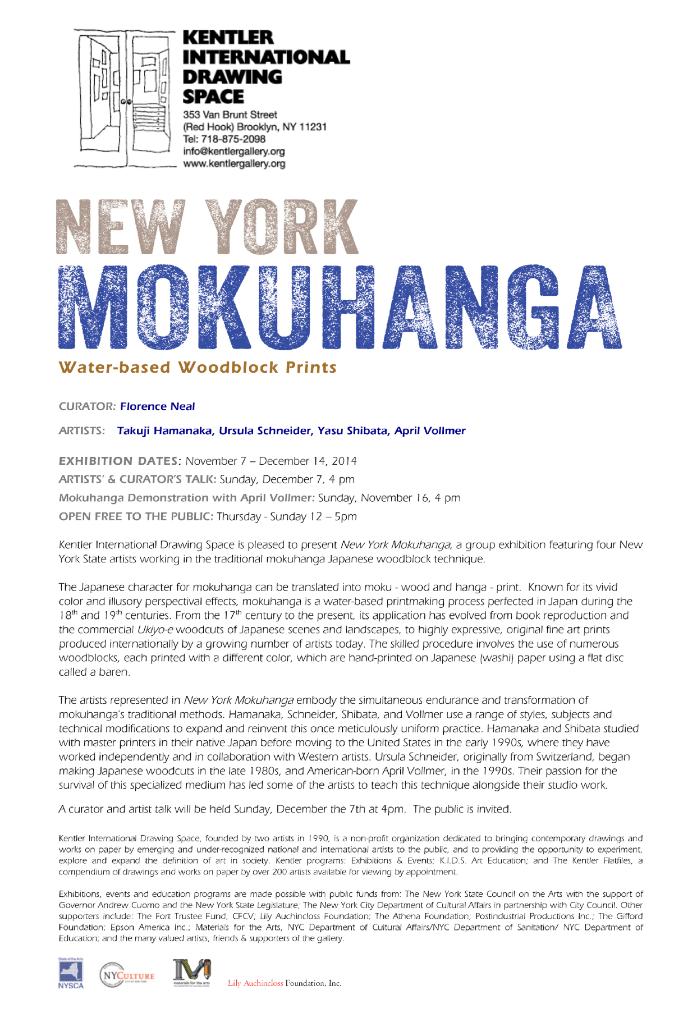 In Japanese calligraphy, the written characters for mokuhangacan be translated into moku – meaning “wood”; han – the process of printing; and ga referring to the “picture.” New York Mokuhanga brings together four New York State artists who have worked quietly and steadfastly for many years in this traditional Japanese woodblock technique. Prints by Takuji Hamanaka, Ursula Schneider, Yasu Shibata and April Vollmer demonstrate a range of styles, subjects and technical modifications that expand and reinvent mokuhanga.

Known for its vivid color, translucence and illusory perspectival effects, mokuhanga is a water-based woodcut printmaking process perfected in Japan with the commercial woodcuts of ukiyo-e —“pictures of the floating world”— during the Edo period (1603–1868). Each print begins as a drawing subsequently transferred onto a woodblock. The technique often involves the use of numerous blocks, each carved and printed with a different color. The carved woodblocks are printed by hand on washi, handmade Japanese paper made from kozo fiber, using a flat disc called a baren. Integral to this technique are hand printing and the natural elements of wood, water, pigment and paper.  The artists exhibited here have taken many years to master their skills in cutting and printing with a sensitivity to the materials required for mokuhanga. A passion for encouraging the survival of this specialized medium has led these four artists to teach mokuhanga as well as make it an integral part of their own artistic practices.

Takuji Hamanaka moved to the United States in 1991. He now works independently, teaches at various institutions and has printed for artists including Sol LeWitt. Hamanaka learned his craft in a traditional workshop in Tokyo, the Adachi Institute of Woodcut Prints, that specializes in reproductions of ukiyo-e prints using the same techniques of the craftsmen from the Edo period. Hamanaka continues to push the boundaries of mokuhanga and explore the contemporary possibilities of the medium.  In one series, he uses simple forms to construct repetitions and patterns by layering color and shape to reveal undulating structural forms.  In another series, he mixes the Japanese style woodcut with shaped and cut Gampi papers and repeatedly pastes them onto the surface (chine-collé) where the accumulations of the sheer handmade paper create nuanced color with a layered depth of surface. In recent works Hamanaka masterfully utilizes the major characteristic found in water-based woodcuts, typically color gradation, or bokashi.  Hamanaka’s prints resonate with light from the color and the paper.

Ursula Schneider, originally from Switzerland, began making Japanese woodcuts in 1988.  She was inspired by Ansei Uchima’s prints and drawn to the luminous colors and transparency of the medium.  She learned the technique from Bill Paden in New York City. Schneider’s images are derived from her life experiences and observations, merging reality and imagination. Her bird’s-eye views of mountains, sky and rivers are magically layered with transparent forms of color and surface revealed through a stippling effect called goma zuri, or sesame seed printing.   She made many trips with guides to remote areas of Iceland and the Arctic Circle in Alaska to draw. While the other campers went hiking, Ursula was on a high ridge drawing, looking and listening. From these drawings she created a series of landscape woodblocks, four of which are included in this exhibition. Tomkins Cove was made in 2012 and depicts Schneider’s ever-changing view of the Hudson River as seen from her studio.  Schneider says, “It takes a clear mind to experience the landscape. The landscape reveals itself in unexpected ways. It is like an animal observing you, but you haven’t seen it yet. As you face it you will recognize that sense of place in yourself.”

Yasu Shibata studied printmaking under Akira Kurosaki at Kyoto Seika University and came to the United States in 1991. He worked as a master printer for Tyler Graphics and is now printing at Pace editions in New York City. Growing up in Japan, Shibata and his classmates learned to make mokuhanga prints in elementary school. He felt ambivalent about using the technique in his own work until he had the opportunity to work in the United States as a master woodcut printer.  Shibata says, “During my twenty-three years as a printer here, I kept making my own work, although at first I made mostly drawings because I was unsure about how to integrate ukiyo-e into my practice and as a way of making something different than what I did nine-to-five. But as I worked with more and more artists (including Francesco Clemente, Chuck Close, Helen Frankenthaler, Yoshitomo Nara, James Siena, Frank Stella, Donald Sultan and James Turrell) in styles from abstract to figurative, drawn and painted to photographic, I began to really appreciate what ukiyo-e did for their work.  Each project was exciting and beautiful—something I could finally be proud of as a printer, and use to my advantage as an artist.” The seven series of prints in this exhibition are reduction woodcuts printed with many thin layers of pigment resulting in glowing, interconnected geometric forms.

American-born April Vollmer sought a water-based technique to suit her needs as an artist-printmaker with a small studio in New York City when she discovered mokuhanga in the 1990s. This was the start of an amazing journey.  She studied with Bill Paden and learned from Japanese masters and other artists. Many artists have Vollmer to thank for generously sharing her enthusiasm and teaching this technique.  She says, “My involvement with mokuhanga started with a desire to learn to print without a press or toxic solvents, but the flexibility of the technique has given me many creative options. Using watercolor and pigment dispersions gave me a clearer understanding of color, and using handmade Japanese paper made me think more deeply about the character of paper in general. Using the technique changed the character of my images by allowing me to develop work through the physical process of making prints, printing blocks in different colors and different orientations to create multiple images from the same blocks.” In 2013 April was invited as the first researcher/writer to the new Mokuhanga Innovation Laboratory in Yamanashi to work on a book about mokuhanga, a guide for contemporary artists outside Japan. The resulting book will be published by Watson-Guptill in July of 2015. Vollmer’s botanical prints in this exhibition range from realistic to abstract, large scale to small. Characteristic of her work are motifs of insects, flowers and imagery in repetition.

Prior to organizing this exhibition, I attended the first Mokuhanga International Conference in Kyoto and Awaji Island (2011) as a fellow mokuhanga artist. In 2013, I was invited to print in an intensive five-week residency near Mt. Fuji at Keiko Kadota’s Mokuhanga Innovation Laboratory (MI-LAB).  I observed and learned from master craftsmen and met many international artists who are passionate about this historic technique. The luminous printed colors emerging from washi paper were surprising and wondrous. I found that the creation and study of mokuhanga prints brought me an awareness of time and an unfolding understanding of the processes and, more importantly, the purposes of making art.
Through this exhibition I wanted to give viewers the opportunity to see and experience the relevance of this ancient technique in printmaking today. Hamanaka, Schneider, Shibata and Vollmer have each found a unique way to impart a contemporary vision of great beauty, power, and subtlety through the traditional medium of mokuhanga.