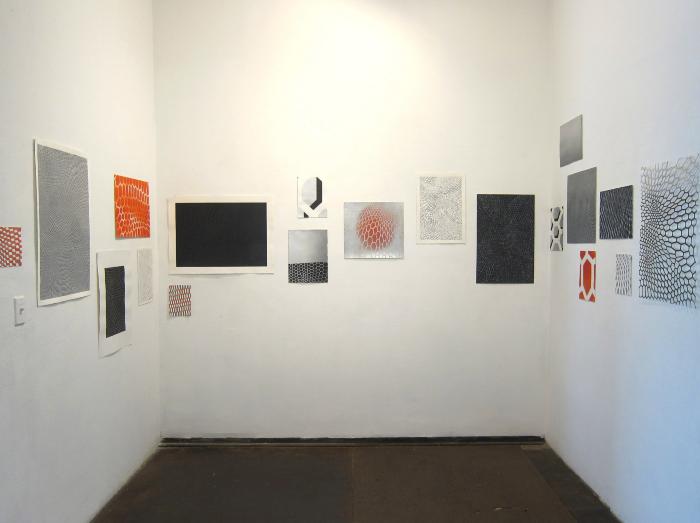 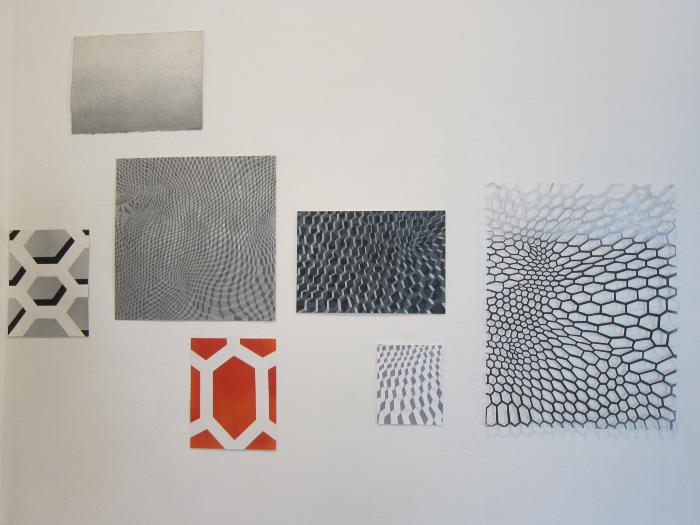 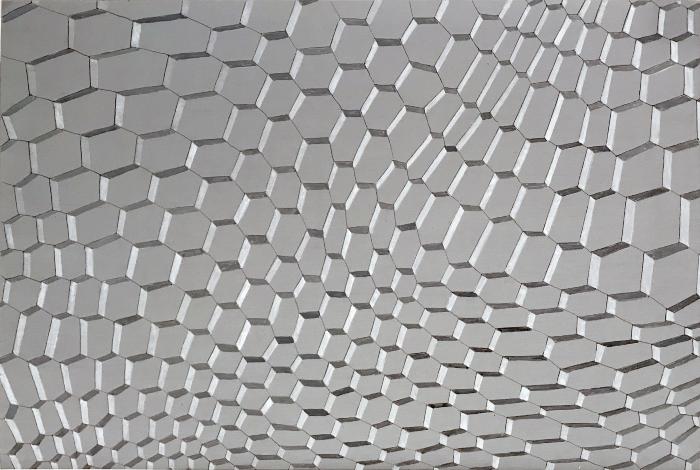 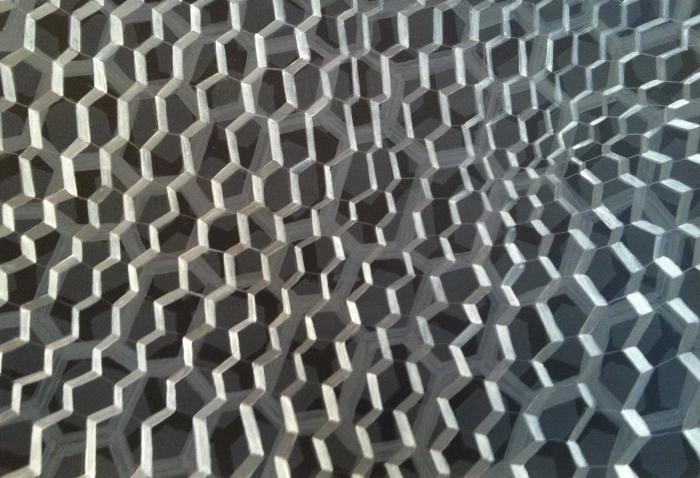 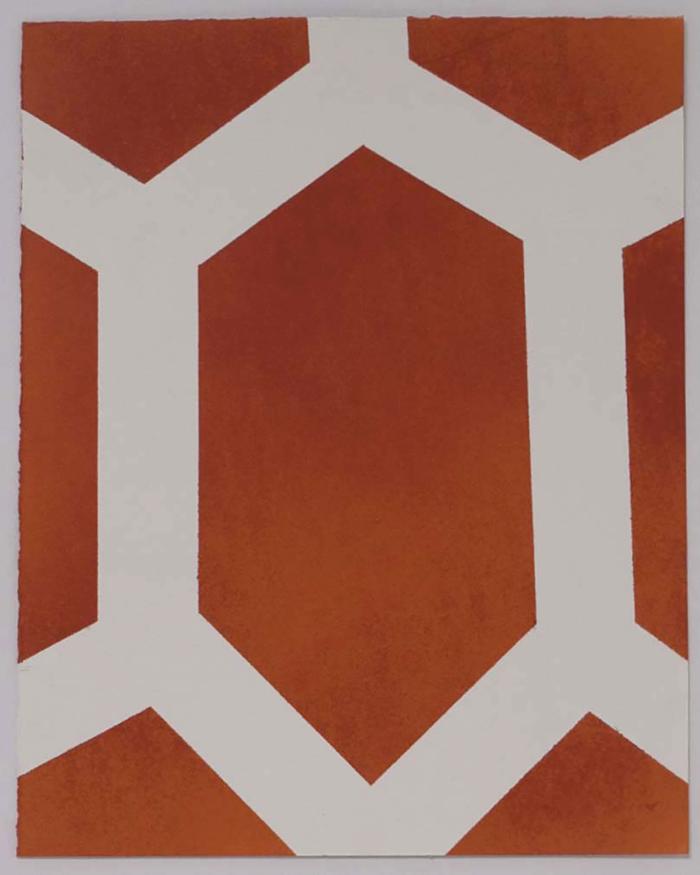 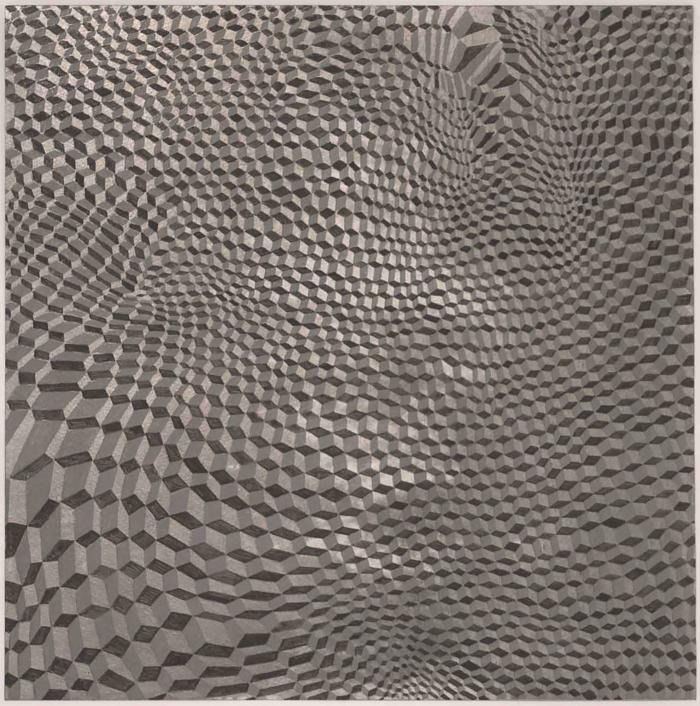 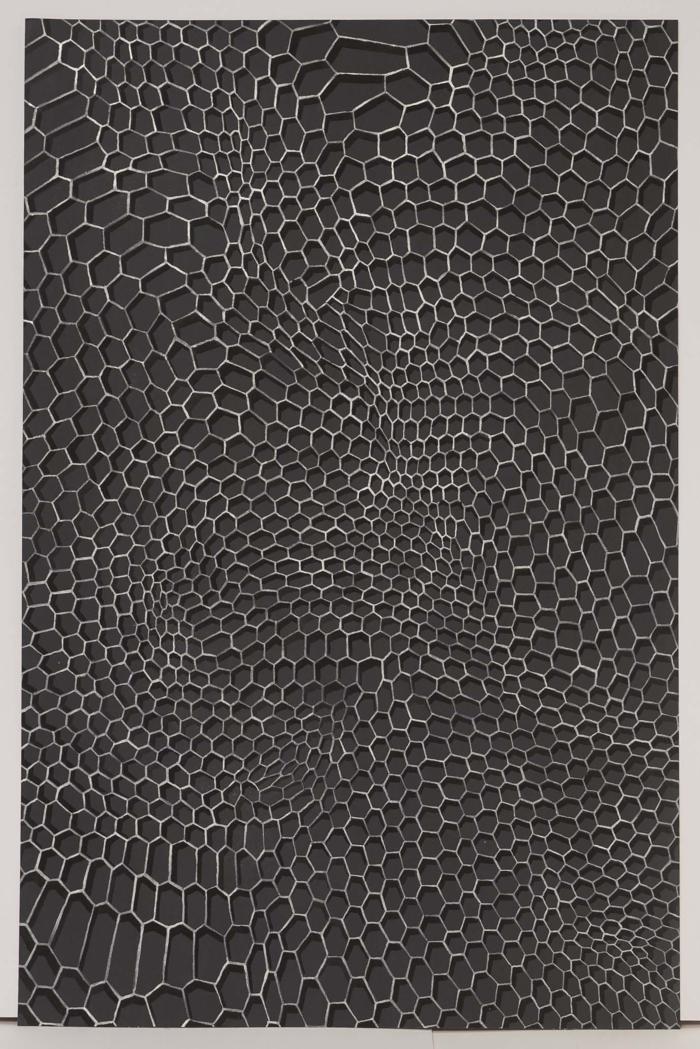 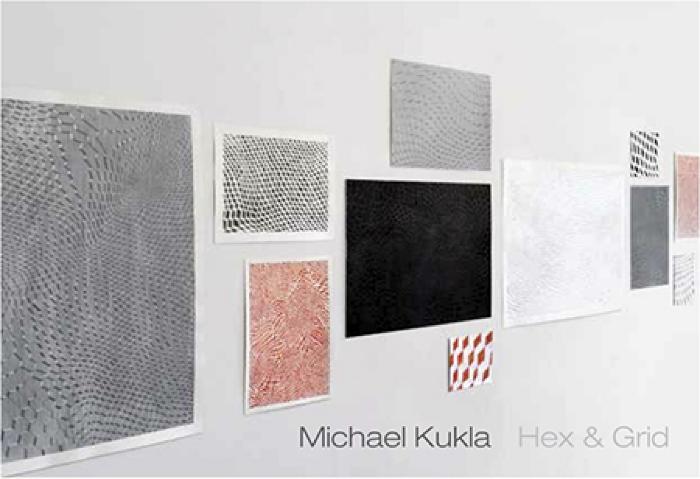 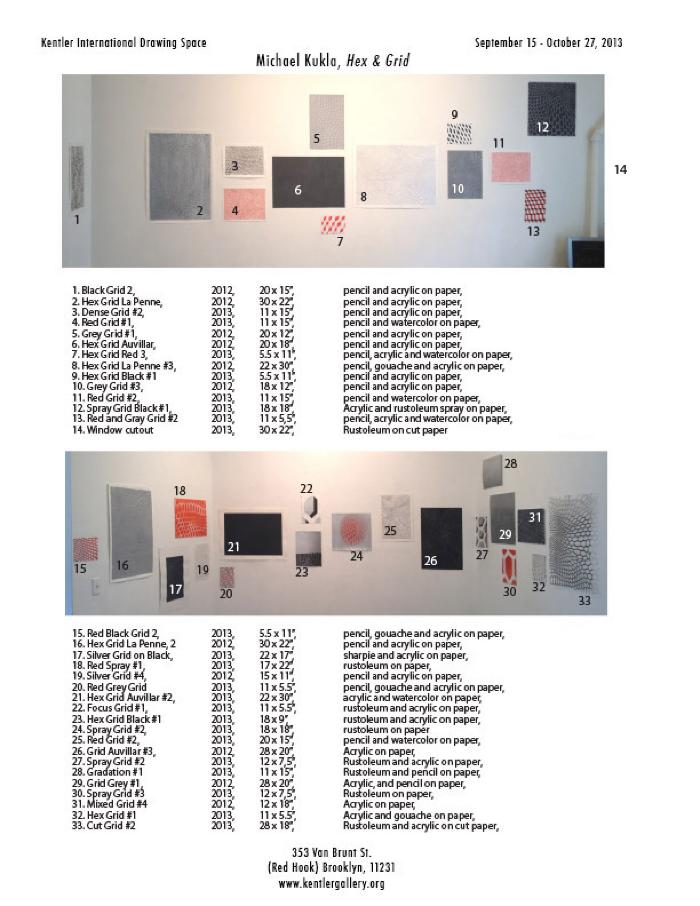 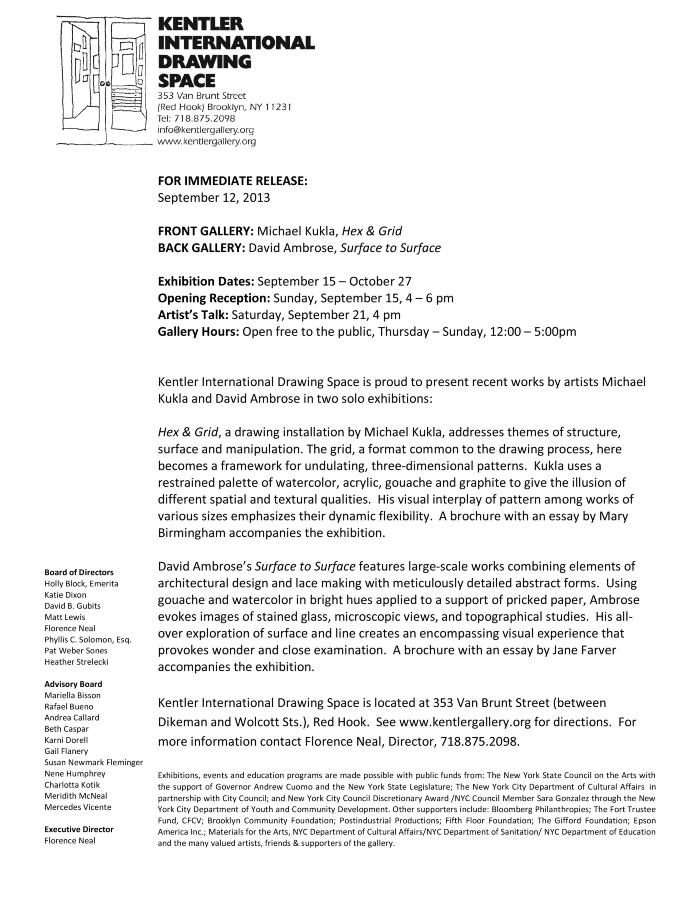 Throughout his career, Michael Kukla has been interested in creating structure and exploring space in both two- and three-dimensional work. His sculptures, made by piercing, drilling, and carving into wood, marble, slate and other materials, highlight negative spaces and reveal hidden structures. In contrast, he makes drawings by accumulating lines and repetitive shapes that spread over the surface of the paper. Whether revealing form through the subtractive process of sculpting or building form through the additive process of drawing, Kukla’s two practices complement and even inform each other.

His recent drawings investigate some new directions. For the past several years Kukla has used the hexagon as his basic structural element. Beginning with a single small hexagon near the center of the paper, he builds a network of connected graphite lines in hexagonal shapes that radiate from the initial one. Kukla’s hexagons are irregular, and by increasing or decreasing the lengths of their sides he subtly alters the multiplying shapes, creating a shifting visual field across the paper.

Working with watercolor, acrylic or gouache, Kukla divides the interior of each cell-like element into three segments, building forms and creating varying degrees of dimensionality within the structures. He maintains a somewhat restrained monochromatic palette, using light, medium and dark tones in each cell. While consistently rendered, the repeated shapes are not slavishly exact, and slight gradations in colors remain. The hand of the artist is always evident.

When Kukla divides each hexagon into relatively equal segments, as in, Hex Grid Grey 1 , 2013, the result is a pattern of stepped cubes or blocks that look like three-dimensional forms standing out from the support. When he varies the sizes of the painted elements, as in Hex Grid La Penne 1 , 2012, the “walls” separating the individual hexagons become shallower and create an overall network of connecting planes, resembling a distorted honeycomb. The structure undulates across a seemingly three dimensional surface, implying an underlying topography. Kukla pushes the grid, creating a dynamic tension in his forms. Just as a string shopping bag conforms to its contents, expanding and contracting with the load of individual objects, Kukla’s structure also reacts to stress. When he stretches or contracts individual cells, the network responds, increasing or decreasing the negative spaces.

Recently Kukla has experimented by further loosening the grid. In drawings such as Hex Grid La Penne 3 , 2012 the individual hexagonal cells are divided roughly in half, with one half divided again into two darker segments. While the resulting dimensional quality is quieter than the previous two examples, this type of drawing carries a strong optical effect resembling snakeskin. Like all of Kukla’s work it challenges the viewer to visually navigate the space.

Kukla sometimes uses metallic paint, and has experimented with commercially made products like Rustoleum, lending his drawn structures a slightly industrial, yet funky edge. While he has previously worked almost exclusively with shades of gray or silver and white, during the past year he decided to incorporate an additional color. Having recently completed an artist residency in Spain, he was inspired by the color and intensity of a popular spice—pimentón de la Vera, a smoky Spanish paprika. Adding red to his normally restrained palette quite literally “spiced up” the work. Several of these new red drawings also differ from the others in their simplified divisions and overall patterns that emphasize the surface.

The repetition and accumulation of countless small elements create larger structures and networks within the individual drawings; displayed as a group they form new relationships to one another and to the wall. Kukla has been exploring this relationship of the parts to the whole for some time, often arranging his drawings in grids, or aggregating sculptural elements into large installations. While his earlier grids comprised equal-sized drawings, Kukla is now experimenting with a livelier mix. His latest installation combines recent and brand-new works of varying sizes, scales and colors, arranged in a continuous band across the wall. This configuration highlights the changes in scale from one drawing to the next, both in the size of the paper and the scale of the imagery within each drawing. The smallest drawings contain the largest forms and reveal the structures in the patterns, like magnified details of the larger works.

The artist is interested in the spatial relationships within and between the drawings, as well as how they might be perceived from near and far. Perhaps ironically, the smallest drawings reveal the most from a distance, while the larger ones depend on a more intimate viewpoint for greater understanding and appreciation. These smaller pieces serve as accents that punctuate the line of drawings. From a distance, the arrangement’s rectangular forms and overall color scheme of black, white, gray and red, may also suggest Russian Constructivist paintings and collages.

There is a new dynamism evident in these works, with their migrating forms and shifting surfaces. While the implied movement within many of Kukla’s works remains subtle and extremely fluid, his juxtaposition of drawings transforms the wall of the gallery into a vibrant and active space. The agility with which Michael Kukla travels among media, materials and processes reveals an artist of great flexibility– a quality that resonates in his work.